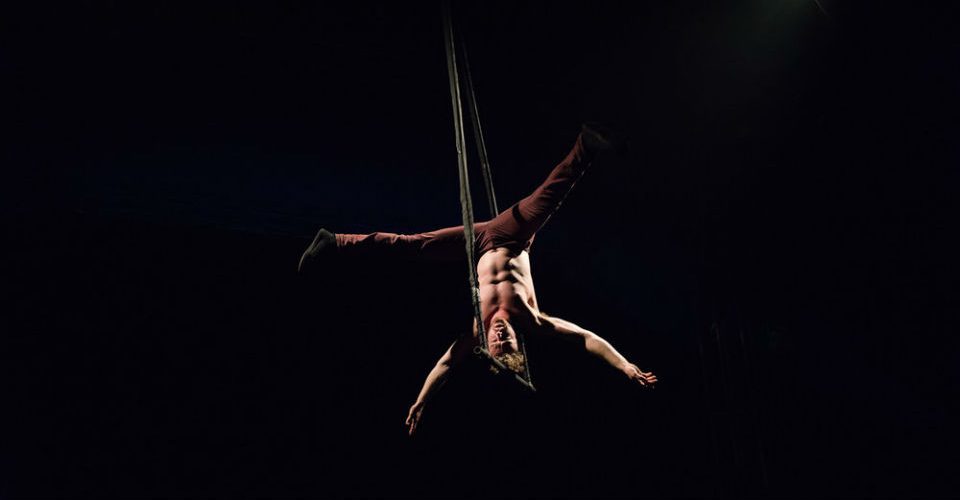 Following a triumphant tour of the UK, performing to sold out audiences at Edinburgh and Brighton Fringe Festivals, the Best Cabaret Brighton Fringe 2015 award-winning Head First Acrobats are once again bringing their sexy circus bodies back Adelaide Fringe with their own unique style of breathtaking acrobatics, bold circus tricks, zany characters and hilarious comic timing in Elixir.

Featuring National Institute of Circus Arts in Melbourne graduates Cal Harris and Rowan Thomas, we speak with founding member Thomas Gorham (pictured) who is about to catch a flight to Perth for their season at Fringe World, who tells us how the trio got together.

“I wrote the original version of Elixir when I finished school,” he begins. “It was written for me and another acrobat called John, but he hurt his back and his knee and was unable to do the show. It was when Cal offered to help me build a teeter board – which is like a seesaw that you do flips on – we started doing some hand-to-hand acrobatic together and we just found it really easy to work together. From there we decided to continue with the show and rewrote John’s part for Cal and created this show.

“That was back in 2013 and Cal was still at school so we didn’t do too much with the show in the beginning. Then we decided to make it a three-person show and that’s when Rowan got involved. From there it became less of a drama and much more of a comedy. Rowan is a bit of a clown so we rewrote some more of the show. When the boys finished school we went on tour and haven’t stopped since.”

Your shows have a bit of a pantomime theme to them. Do you have a background in theatre?

“No, I started out as a break dancer,” Thomas says. “I wanted to make a career out of being physical, but being a professional beat boy in Australia wasn’t exactly a smart move for my career so I ended up at circus school.”

Tell us about Elixir. How did that story of trying to create an elixir of everlasting life come about?

“My original piece was a 15-minute solo show which was based around Brumby’s Bakery in Melbourne, and my final graduation showcase piece was a head trapeze/breakdancing act where I was a zombie. So I wanted to write a show that would justify that sort of absurdity,” he explains. “Originally we were going to make different potions with different effects, but then we started thinking about how zombies were made – meaning that they’re not really magical but are made in a laboratory. We put a lot of pop-culture references into it and added a plenty of comedy, then all of a sudden we’re in the lab, sneaking around, drinking potions and making zombies.”

Your kids show, Arrr We There Yet? has a lot of audience participation. Is there much of that in Elixir?

“There’s a moment where the audience can get involved, but it’s definitely nothing as throughout like the kids show.”

And are they insinuated or are each of you playing a whole bunch of different characters?

“We just play ourselves,” he says. “But, without wanting to give too much away, one of the characters does turn into a zombie.”

Tell us about some of the fantastic acrobatic feats you perform in Elixir.

“The show is set in several acts, and so each time you drink a potion the physical attributes of the performers on stage change. We then record the results and experiment a little more with more potions.

“The opening act is hand-to-hand acrobatics which is us standing on top of each other, flipping over, and doing handstands and headstands on top of each other,” Thomas says. “We also have some ladder acrobatics, hand balancing and some head trapeze – which is a trapeze that swings from the ceiling and you balance on it on the top of your head. The clowning character does some work in the giant Cyr Wheel; he’s a really technical artist that goes upside down and spins around with in the Wheel. Then we finish with the Teeter Board act which is the seesaw.”

Having previously seen Head First Acrobats perform, I can honestly say that some of what you guys do is a little nerve wrecking. Even with all your years of practise and performing, do you still have moments where you get nervous?

“Absolutely!” he chuckles. “It doesn’t matter how many times you’ve done a trick, if you could die doing it you’re focussed [laughs].”

What’s the scariest thing that you do?

“Probably when I’m swinging on the head trapeze,” Thomas says. “I’m balancing upside down on a small platform that is attached to a bar while it’s swings from the ceiling; that moment that I let go and have to free balance is just a bit nerve wrecking every time… because if I fall off, I’m upside down!”

So, what part of you woke up one morning and decided that you wanted to spend your days putting your life at risk?

“My coach said to me one day that I would be good at this and I agreed to do it,” he laughs.

Which performance moment most amazes you about your two acrobatic cohorts?

“Cal is one of the only people in the world who can do a handstand on top of a free-balancing ladder, so it’s a pretty rare trick. He is about 152cm, which is quite tall, so that trick must be pretty scary for him – even though he does it all the time.

“For Rowan, there are so many technical moves in his Cyr Wheel act; some of them are so complex that I don’t even know what’s happening,” he says. “If there was anything that would make him nervous, it’s probably one of the big tricks in the Cyr Wheel but, honestly, all of his tricks are really hard.”

How similar is this year’s production of Elixir in comparison to last year’s performance?

“We’ve had a lot of things change on the technical side, so we’ve got a really good sound, lighting plan and plot which have really upped the production value of the show. Comedy wise, it’s also improved; we’ve added so many more jokes. We started out as quite an acrobatic show, then an acrobatic-comedy show, and now it’s like a comedy-acrobatic show [chuckles].”

Are you happier with it that way?

“Absolutely!” Thomas enthuses. “We haven’t cut any tricks or acrobatics – we just kept putting more and more comedic moments into is so the show has got funnier each season. The only way to make this show even funnier is to keep finding more jokes, so that’s what we did.”