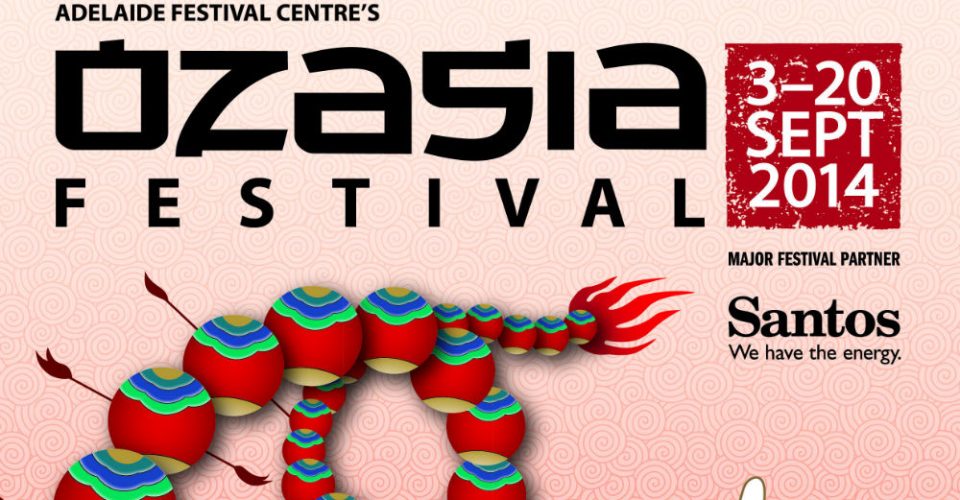 Adelaide Festival Centre has unveiled the 2014 OzAsia Festival program, which celebrates Adelaide’s sister state, Shandong Province, China. The Festival will feature more than 140 performers from the region and will put the spotlight on its rich history and resplendent culture as well as presenting performances and events from on Japan, India, Korea, Philippines, Cambodia, Palestine, Bangladesh, Russia, Indonesia, Mongolia and of course Australia.

Minister for the Arts Jack Snelling says “OzAsia is the largest and pre-eminent cultural event in Australia presenting on works from the Asian region and is recognised around Asia as an important step in solidifying Asian – Australian relationships. The Festival has grown steadily since its inception eight years ago and is now an important event on South Australia’s cultural calendar.
“It addition to entertaining audiences, OzAsia is helping our understanding of Asian culture, traditions and language and connecting local Australian Asian communities who have historically not taken part in cultural activities in Adelaide.
“This year the focus on Shandong will bring to Adelaide some amazing shows and exhibitions that would otherwise never be seen in this country. This exchange of culture will nurture our Sister-State relationship with Shandong which is providing unique social, cultural and economic opportunities for South Australia.”

This year’s hero image for the Festival is the dragon kite; Chinese dragons are legendary creatures in Chinese mythology and folklore, like the dragon the Festival holds virtues of power, strength, energy and good fortune. Shandong is known as the birthplace of kites and is home to the World Kite Musuem, the largest in the world.

Adelaide Festival Centre CEO and Artistic Director Douglas Gautier says, “OzAsia has grown over the last eight years and has been embraced by local Asian communities and mainstream audiences alike. It has enriched the experience of South Australian Audiences by providing a more diverse range of artistic expression while also helping our understanding of Asian culture and traditions. OzAsia Festival is a vital ingredient in aiding cultural understanding and promoting a harmonious community.
“This year’s OzAsia Festival showcases Asia’s diverse arts and culture, through an array of performances, events, workshops, forums, lectures and exhibitions. From acclaimed Shandong Acrobatic Troupe to Beijing’s famed minimalistic dance troupe, TAO Dance Theatre. This great work has never been seen in this country before and is exclusive to OzAsia festival.
“The Festival engages audiences through theatre, dance, music both contemporary and traditional, film, percussion, food and calligraphy. Audiences of all ages will have the opportunity to learn more about this province which is the cradle of Chinese civilisation and gain insights into the eternal charm of ancient Shandong and the many facets of its contemporary culture.”

Program highlights:
Qingdao Song and Dance Theatre’s premiere and exclusive performance of Red Sorghum; the company is renowned for their breathtaking work. Adapted from the novel by Shandong’s Nobel Prize winning author Mo Yan, and is the winner of this year’s Wenhua Prize, China’s Ministry of Culture’s highest award for professional arts, the work presents themes of love, affection and patriotism.

Ghosts, foxes, immortals and demons are brought to live with stunning performances, breathtaking acrobatics and dream-like staging by award winning Shandong Acrobatic Troupe. Featuring more than 50 performers the Australian premiere of Dream of the Ghost Story is a spectacular and visually stunning experience for the whole family.

Another explosive Australian premiere see’s Director Wang Chong and Théatre Du Réve Expérimental present Ibsen in One Take, a movie, filmed live on stage in a single take. Inspired by the works of Norwegian dramatic playwright Henrik Ibsen, the work is an avant garde explosion of theatrical convention in China that defies artistic and technical expectations.

Beijing’s famed minimalist modern dance troupe TAO Dance Theatre has taken China by storm and is now set to captivate Adelaide audiences this September with the performance of 6 and the world premiere of 7, commissioned by Sadler’s Wells, with the support of the Adelaide Festival Centre.

Internationally renowned calligrapher/artist Hiroko Watanabe will fuse words and imagery together with expressive, controlled brush strokes to create a three dimensional calligraphy installation to the rhythms of Japanese band Above The Clouds. Together they meld the contemporary time honoured calligraphic traditions of Japan with the improvisation of Jazz infused electric guitar and bass with the strict cadence of Japanese drums.

Floating Melodies sees Adelaide icon The Popeye come to lifefor a series of concerts on the River Torrens. Mujhe Rang De Give Me Colour celebrates the culture of Bollywood with Fahad Farooque, and Way of Tea will immerse you in Japanese culture with an intimate tea ceremony and performance by David Kotlowy and Mayumi Kako.

World-renowned composer and conductor Tan Dun returns to the OzAsia Festival with the magnificent Adelaide Symphony Orchestra with the Australian premiere of Nu Shu: The Secret Songs of Women. Tan Dan weaves heart wrenching stories of mothers, daughters, sisters and how they navigate their lives through the secret language of Nu Shu.

Due to last year’s highly successful collaboration with the Migration Museum, they return this year with a day-long celebration and exploration of the origins and cultures of tea. Infused: All About Tea will feature cooking demonstrations by special guest Simon Bryant using tea-based recipes. This family-friendly event is FREE.

Prepare your senses for The Emperor’s Feast at Park Lok Chinese Restaurant, a sumptuous and exquisite Chinese Feast by world-renowned chef Ao Jun of Beijing Fangshan Restaurant and Adelaide’s own chef Cheong Liew. Jun’s mouth-watering Chinese recipes will be peppered with Liew’s influence of French and Malay flavour-fusions.

Moon Lantern Festival remains a pivotal night on the State’s cultural calendar, this year falling on Monday 8 September, 3pm – 8.30pm. Featuring 10 schools and 48 Community Groups, Elder Park is transformed and will be a glow with abundant light from the hundreds of lanterns and the magical wonder of the full moon. Media partner ABC RN Drive will broadcast live from the event.

Get your popcorn ready, OzAsia on Screen, in association with the Media Resource Centre, returns with a wide variety of films and documentaries showcasing a selection of the 2013 award winning films from the Asia Pacific’s Screen Awards, Asia Pacific’s highest accolade in film. Program highlights will be Red Sorghum providing patrons the opportunity to see the film after they’ve seen the production on stage. The Festival is also partnering with Adelaide Cinématèque and will present The Good, The Sometimes Bad and the Never Ugly – Action Women of Hong Kong a selection of films featuring Hong Kong’s most beloved actresses it will include a free event by Hong Kong film critic, curator and researcher Sam Hong who will present Everything you ever wanted to know about Hong Kong Cinema but were too afraid to ask?

Returning to compliment OzAsia on Screen is Adelaide Festival Centre’s GreenRoom Short Film Competition. Supported by ANZ the competition aims to celebrate young emerging filmmakers and recognise the talents of local artists. With this year’s focus on Shandong, which is known as the birthplace of Confucius as well as a pivotal cultural and religious site for Taoism, Chinese Buddhism and Confucianism, the competition’s theme is based on the Confucius proverb “Everything has its beauty, but not everyone sees it”. Registrations close 11 August. For entry details log onto adelaidefestivalcentre.com.au/greenroom

Presented by Shandong Provincial Department of Culture Rizhao Farmers Paintings will be on display in the Festival Theatre Foyer whilst South Australian Margaret Lee has curated Silk Legacy: A Showcase of Chinese Embroidery Tradition an exhibition and number of workshops celebrating the fine art of Chinese embroidery on display in the Artspace Gallery.

Shorebirds is an exhibition that will celebrate the spectacular arrival of shorebirds on their migration to South Australia’s shores with artists from across the world on display in the Space Theatre foyer. Presented in association with The Adelaide and Mount Lofty Ranges Natural Resources Management Board, Birdlife Australian and the Fly Away Print Exchange.

Once again the OzAsia Festival collaborates with The Bob Hawke Prime Ministerial Centre at UniSA to present the popular FREE Keynote Lecture. Professor Michael Dutton from the Department of Politics, University of London will present The Biography of A Coin

In 2013 an agreement was signed between Adelaide Festival Centre Trust and the Shandong Government’s Department of Culture. The agreement confirmed a commitment to continue supporting the cultural exchange between South Australian and Shandong. It established a long-term, cooperative and mutually beneficial relationship between the Shandong Government and OzAsia Festival.