DISCOVER, REFLECT AND DREAM WITH THE 2015 SEASON AT THE ADELAIDE FESTIVAL CENTRE

Adelaide Festival Centre cements its position as one of the nation’s leading cultural precincts as it unveils its 2015 program.

The 2015 program features over 845 artists in 211 performances throughout the year. There are 137 international artists from the United Kingdom, France, New Zealand, United States, Argentina, Germany, Russia and Scotland. As well as the best from Australia with 708 Australian artists, 458 are South Australian performers. The 2015 Festival showcases six world premieres, eight Australian premieres, 14 Adelaide premieres as well as six Adelaide exclusives.

Adelaide Festival Centre CEO and Artistic Director Douglas Gautier says, “The 2015 season delivers a well-rounded program of diverse South Australian, national and international work full of collaborations. Here at the Festival Centre we continuously work with other arts organisations to bring you concerts, shows and exhibitions that would not otherwise be possible. The list of this year’s collaborators is impressive, – Australian Ballet, Adelaide Festival of Arts, Australian Dance Theatre, Brink Productions, Musica Viva, New Zealand Dance Company, State Theatre Company of SA, Windmill Theatre, The Walkey Awards and many others.

“We strive for excellence and the 2015 season is testament to that and puts a very large spotlight on the arts in Adelaide”.

Kicking off the season, direct from London’s West End will be the Adelaide premiere Thriller Live!, a theatrical concert spectacular celebrating the legendary songs and mind-blowing dance moves of Michael Jackson and the Jackson Five.

The biggest selling magic show in the world returns with its third instalment The Illusionists 1903, featuring eight world-class illusionists from across the globe. The audience will be transported to the golden age of magic, showcasing the origins of some of the greatest illusions ever seen.

Lovers of music will be spoilt with the plethora of choice on offer including the double bill, So Frenchy So Chic Live! Featuring indie pop darling, Emilie Simon revered for her charismatic stage presence and intricate layering of vocals and live instrumentals and French/Finnish duo The DØ, Olivia Merilahti and Dan Levy.

There’s plenty on offer for lovers of all things classical, including beautiful music in a stunning setting as Cocktail Concerts with Niki Vasilakis returns. Overlooking ElderPark, Niki will once again be breaking down the barriers of classical music and making it accessible, informal and widely appealing and the series will feature talented musicians from across Australia.

Legendary winner of 18 Grammy awards, Count Basie Orchestra features a peerless array of instrumentalists with combined credentials that have topped the upper echelons of the international jazz world for decades. Swing with them on their 80th tour with special guest vocalist Carmen Bradford.

The classics keep coming with Max Raabe and Palast Orchester from Kurt Weill to Cole Porter, this will be a magical evening of glamour and romance. Musica Viva celebrates its 70th birthday with a recital tour by superstar violinist Maxim Vergerov with Roustem Saitkoulov on piano.

A unique memoir in music revealed by one of Australia’s leading AIDS activists –acclaimed composer Lyle Chan and Aria-nominated Acacia Quartet will present An Aids Activist’s Memoir in Music, a unique memoir created during the peak of the epidemic.

In association with Adelaide Festival and Queensland Theatre Company, Adelaide Festival Centre will present the Adelaide premiere of Black Diggers. Sure to be a moving night of theatre, it’s the untold story of Aboriginal soldiers in World War I, featuring an all-male, all-indigenous cast, the show evokes these fearless and heroic men, largely unknown to history, who helped win the war but lost their battle back home.

From State Theatre Company of South Australia, one of the world’s greatest actresses, Miriam Margolyes will present the world premiere of The Importance of Being Miriam. See her talent on display as she brings to the stage some of literature’s best known characters along with some fascinating personal insights of her love of literature and its characters.

The iconic children’s book Masquerade, written and illustrated by UK author and artist Kit Williams, which sold over two million copies worldwide in the late 1970s, has been lovingly crafted into a play by award-winning Australian playwright, Kate Mulvany. Masquerade is an enchanting new theatrical adventure that is bound to delight audiences aged 9 to 90.

We have two productions from Windmill Theatre – The Book of Loco, which was awarded Best Theatre Production at the 2013 Adelaide Fringe Festival, and Bear with Me, an intimate concert especially for bears, their children (and their grown ups). 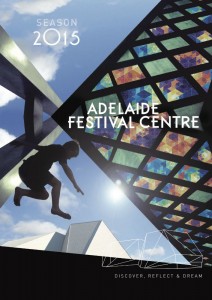 Adapted by Brink Productions from Patrick White’s short story Down at the Dump is The Aspirations of Daise Morrow featuring Zephyr Quartet, it’s guaranteed to be a richly theatrical and immersive adaptation.

Inspirational dance from abroad and Australia, The New Zealand Dance Company is renowned for its earthiness, physicality, rhythm and expression. In an ANZAC centenary celebration, Rotunda brings to life the world of the band rotunda, an iconic symbol of early 20th Century community and draws from the extraordinary courage and spirit of ANZAC men and women. This exceptional production will also feature a live 20-piece South Australian brass band.

As part of Adelaide Festival Centre’s inSpace program, two of Australia’s most exciting dance collaborators Lisa Griffiths and Adam Synnott will present the powerful and energetic world premiere of Chance. Inspired by science fiction, the piece is a study on humanity’s beginnings, behaviours and cycles.

The Australian Ballet will return with love tragedy Giselle and an effervescent evening of wonder with triple bill, The Dream.

Australian Dance Theatre will celebrate 50 years of Australian contemporary dance with a 50th Anniversary Gala. To complement the concert, Performing Arts Collection will feature an exhibition showcasing how the company has reinvented itself under changing artistic directorships. Another dance highlight will be The Australian Dance Awards – the pre-eminent dance industry awards.

Sydney Dance Company again will prove that dance doesn’t have to play it safe. Their trio of work De Novo features choreographers Rafael Bonachela, Alexander Ekman and Adelaide’s own Larissa McGowan. The work breaks new ground with a soundscape from Australia’s acclaimed Sarah Blasko and Nick Wales and costumes by designer Dion Lee.

Adelaide Festival Centre strengthens its world-class festival reputation with back-to-back Festivals in 2015. The Come Out Children’s Festival runs over nine days, from May 22 – 30 with hundreds of shows that promise to engage, stimulate, challenge, educate and entertain young minds.

The diversity of shows, talent and interactivity for children in this festival is astounding, featuring a total of 550 events, performances, exhibitions, workshops and activities with no less than 12 South Australian premieres, one Australian premiere and five world premieres.

Kids can expect mayhem, riotous inventions and catastrophic disasters as the Adelaide premiere of Richard Tulloch’s sequel adapted from the book by Andy Griffiths and Terry Denton, The 26–Storey Treehouse takes to the stage. Bound to get the imagination bubbling is Argus by Dead Puppet Society, who have created a fantastical world with its roots in puppetry and old fashioned story-telling. Imaginary Theatre’s production Look wraps children up in a gentle theatre experience.

For the big kids 8+, Chalk About, a Curious Seed production, is both sophisticated yet fun. It’s a playful, funny and sometimes moving look at how young people see themselves and others, featuring dance, chat and one perfect scene containing everything you could wish for (including pizza). Kids will get a chance to go on a circus safari through jungles, oceans and plains when the Circa carnival comes to town with Carnival of the Animals.

Barry Humphries will present his first Adelaide Cabaret Festival, 5 – 20 June, an event to savour and remember – curated by the finest cabaret artist this country has ever produced. As well as the Variety Gala performance, five diverse and engaging shows have already been announced ahead of the official Festival program launch in April.

Joseph Mitchell will deliver his first OzAsia Festival, 23 September – 4 October with an emphasis on Indonesia, and will ensure this contemporary Asian arts festival continues to assume its world leadership position when it comes to Australian/Asian cultural exchange. Moon Lantern Festival will be celebrated rain or shine on 27 September.

The stunning views from our new destination bar The River Deck make for a perfect place to meet friends for drinks before and after any social event. As the weather warms up, Summer Sessions on the River Deck will be the place to be seen, with live music every Friday and Saturday night throughout January.

Families won’t be disappointed as Horrible Histories live on stage returns with a brand new show, Barmy Britain, with some amazing 3D effects. The popular Something on Saturdays program continues to delight in 2015, offering children aged 3-10 their first steps into the magical world of theatre. The fun runs from 2 May – 5 September.

Step beyond the stage for our year-long program of curated exhibitions including The Maj 100 – A hundred years in a hundred pictures, Peoples’ Choice, The Art Of Deception, Blake Prize, Remembering Gallipoli, Art By Prisoners 2015, 60 Years of Edna, Possums!, Australian Ballet Exhibition, Breaking Ground 2015: Seeing Spring, Australian Dance Theatre: 50 Years of Contemporary Dance, Nikon Walkley Press Photography Exhibition and in 2015, we will be celebrating 10 years of Our Mob. Information on the exhibitions and opening hours can be found on our website.

Bring your friends, both old and new to a performance as part of our Morning Melodies program, great daytime entertainment at an affordable price.

Community involvement is an important aspect of the Festival Centre and each year there is a range of eclectic and vibrant community events and performances as part of the World of Cultures, celebrating our rich multicultural society.

Give yourself an early Christmas present and complete your 2015 season with the ever popular Christmas Proms. There’s no better way to get into the festive spirit than with rousing renditions of some of the most popular Christmas classics.

The Festival Centre’s GreenRoom program (18-30 year olds) and centrED program (primary and secondary students) will continue to give young people the opportunity to participate in a number of workshops, events and forums. The Student Tix program offers discounted tickets, enabling younger audiences to access the arts. This is supported through the generous donations of the Adelaide Festival Centre Foundation.