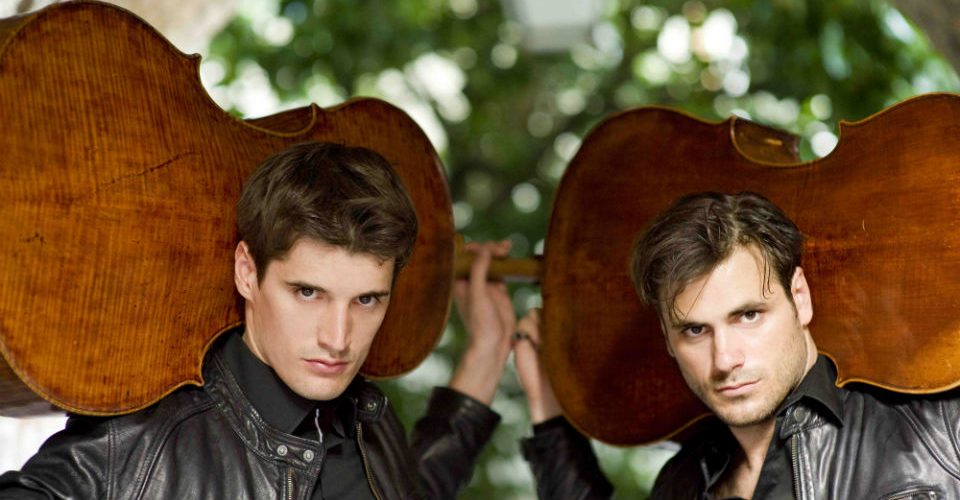 Luka Sulic and Stjepan Hauser are young Croatian cellists. Together, they are known as 2CELLOS. These talented musicians have taken the classic cello to new heights, performing different genres of music, from classical and film music to pop and rock, be it Michael Jackson’s Smooth Criminal, AC/DC’s Highway To Hell or something from Bach and Vivaldi.

First appearing in Adelaide with Sir Elton John on his world tour, 2CELLOS have become YouTube sensations with their mind-blowing renditions of rock classics and outstanding film clips. They have performed with the likes of Queens Of The Stone Age, Red Hot Chilli Peppers and George Michael, and in prestigious venues and events such as Madison Square Garden, Paris Olympia, Queen’s Diamond Jubilee, and the Emmys in L.A.

It is early morning in London as we speak with a deep-voiced and charming Luka Sulic, and discuss their 2011 Adelaide appearance with Sir Elton.

“That Elton John tour was amazing exposure for us, but also we gained a lot of experience playing in front of large crowds, like the one in Adelaide,” he begins. “It was very good because we learned how to play in large arenas and stadiums, which really helped us for what we are doing now. After touring with Elton for three years, it all became routine.”

You were once referred to as cello rivals, suggesting that you and Stjepan met through the many competitions and performances you were both involved with. Is that correct?

“Yes, we met as teenagers in summer music camp in Croatia. We attended many of the same competitions when we were young kids; we were from the same part of the world, so we were sort of like rivals,” Luka chuckles. “The minute we met we became really close friends, we clicked straight away because we have the same sense of humour and temperament, and get along really well, but there is always this competitive between us. Which is healthy actually, it’s good.”

That does show in you on-stage interactions, and certainly creates a sense of excitement when it comes to your performance.

“Yeah, we push each other to higher limits by being like this; it helps a lot with the chemistry I think.”

So what was the choice, not just to start performing together, but to move away from the classical side of cello and into the rock classics that you perform now?

“Stjepan had just finished his studies and we were in London,” Luka says. “We were fed up with this student life and knew we had to do something different – take our own path. In classical music you play note that are written there for 300 years, you cannot really change much. We wanted to do something unique; do our own arrangements. We also loved other kinds of music and we wanted to make a revolution, not only for cello but in classical music in general. We wanted to show what this instrument can do and attract the younger generation.

“We knew if we wanted to succeed we would need a lot of people behind us. That’s why we chose YouTube as our best platform to do this. We always knew YouTube could be so powerful and back then there weren’t so many viral videos yet, so we were kind of one of the first ones who started with YouTube and it’s paid off and now we have freedom; we can do whatever we want, like with this next album we are just finishing with the London Symphony Orchestra. So, we kind of took another direction and it’s brought us so many things – Elton John, stadiums and arenas – but we can still get the best out of the classical music scene as well. It’s been very rewarding.”

Speaking of YouTube, your clips are amazing and obviously a lot of work has gone into them. Who comes up with those ideas of them and are you working with someone who helps to create these?

“All of the ideas come from us, basically, because when we are in the studio we think about music video ideas straight away,” he says. “We have a few people in Croatia that we work with and we know exactly which songs to give to who and which director would best fit the idea for each video. Actually, the most watch videos are not so technically well shot, but they have a very funny twist or idea – like Smooth Criminal or Thunderstruck; they’re all filmed by the same guy who isn’t technically the best director in the world, but he listens to us [laughs]!”

You certainly have that comedy thing going too, such as with Highway To Hell with Steve Vai. There is a little friendly rivalry going on, which is pretty funny.

“Yeah, that we shot in America with a different director, but we have many videos like this, like Avicii’s Wake Me Up also, where we become old. Thunderstuck is also funny at the end, with the audience not applauding or reacting at all. But, we also have other videos with yet another guy who has better sense of beauty in the video making so it’s more for Mumford & Sons’ I Will Wait, Sting’s Shape Of My Heart or more romantic stuff. He’s better for that.” 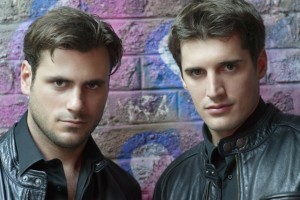 Is he the one who the stunning Celloverse clip?

“Yes, yes, that’s the one!” Luka says. “He also created the They Don’t Care About Us (by Michael Jackson) clip which is more of that animation behind us – like explosions and stuff. So, we have three regular guys so far. For the new album of beautiful movie theme songs with the London Symphony Orchestra coming out next year, we’re going to find more people, because we have these fourteen new tracks we want to make film clips for.”

What’s the process of choosing the songs you perform? Is it just, ‘I love this song, let’s do it’, or is it more in depth than that?

“Yeah, we have to love the song that we want to play and we know straight away if it’s going to work or not; it has to have a certain melody or riff that can be played on cello.”

So does that mean there will be room for Stairway To Heaven [laughs]?

2CELLOS have performed with so many people, but do you have a wish list of artists that you would still like to perform with?

“Yes, of course,” Luka says. “I would like to take this next project all around the world and play with all the great symphony orchestras. We are playing Sydney Opera House with the Sydney Symphony on this tour. As for other artists, maybe Sting – his voice would be wonderful with the cello – or do something unexpected like with Eminem or someone like that. No one has ever combined cello with hip hop, so maybe something like this.”

That’s certainly thinking outside the box! Having seen you perform live and on your film clips, your bows take an absolute beating! How many do you go through in a week?

“We take ten bows on the road with us,” he explains, “but we re-hair them all the time. Every town has a luthier who can repair them for you and get new horsehair. So, if you see horses without tails, it’s because of us [big laughs]!”

Do you have any originals songs?

“We have two or three, but so far we haven’t focused on this because we’ve concentrated on recreating and putting our own spin on cover songs and making this album of film music. But, maybe in the future, if there was a reason for us to compose originals – like for a movie or TV special – then, of course. We will see.”

What a brilliant step to write a movie score.

“That is on my wish list!” Luka enthuses. “I love movies in general and have been a fan of film music since I was a kid.”

Do either of you play any other instruments?

“We can play a little bit of guitar and piano, but just for fun. The cello is the main instrument, because cello is really hard to master. It’s like your whole life you have to dedicate yourself to it. People don’t realise how hard it is to play the cello, then they see us playing and they are like 40, and they say, ‘Oh, I’m going to start taking cello lessons’ and I tell them ‘Good luck [big laughs]!’

Well, you guys have certainly made the cellos all your own, haven’t you?

“Yeah, with cello you really have to start as a kid because of the complexity, of muscle memory and all this fingers and positions everything, it’s so complex. It’s like a sport; you can’t expect to start football at 25 and be as good as Ronaldo.”

With the cost of cellos and bows to consider, you wouldn’t have had much time or money to get led astray as teenagers.

“Yes,” he laughs. “With classical training, it’s almost like military. It takes lots of discipline and dedication, so we had to give up a lot of things our friends did at school did, like going out all the time. We are making up for that now [chuckles]!”

This is the first time that 2CELLOS have come to Adelaide as part of their own headline tour.

Tell us about the concert and what it’s going to be like for the people who are going?

“Oh, it’s going to blow their minds!” he enthuses. “As well as me and Stjepan, our drummer Dusan Kranjc is not only a big feature the second part of the show he is also a huge part of 2CELLOS.”

Is there anything you want to add?

“No, it was a very nice conversation. Thank you.”

Luka, the pleasure was all mine!

2CELLOS perform The Celloverse Tour at Thebarton Theatre from 8pm on Mon 28 Nov.
Book at Ticketmaster.com.au. Click HERE to purchase your tickets.