A Very Kransky Christmas: A Musical Family Get-Together Like No Other – Interview 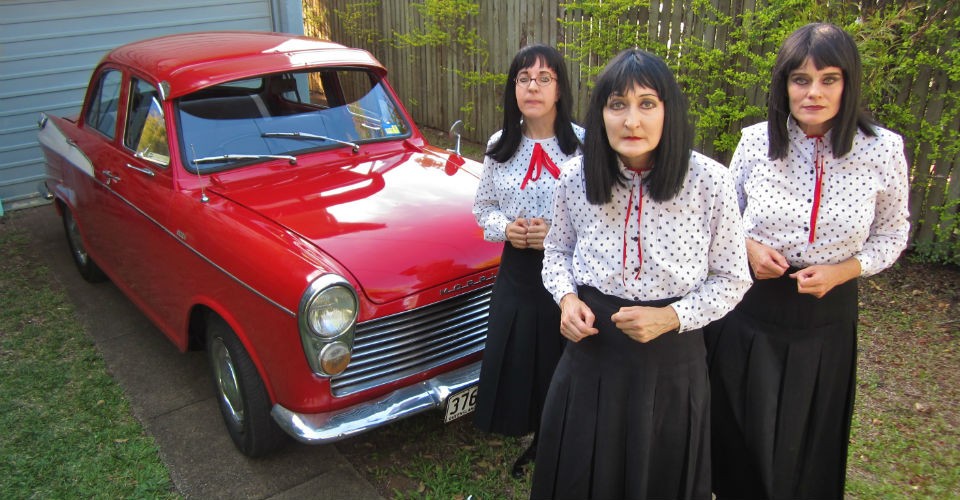 Venturing out from their home in Esk, Queensland, The Kransky Sisters have filled up the Morris with a swag of their most treasured festive season items, their distinctly unusual musical instruments, and enough petrol to get them to Sydney before returning to Adelaide to share their cherished Christmas traditions and gifts with us in A Very Kransky Christmas. This will be a family get-together like no other.

Mourne Kransky – eldest sister to Eve and Dawn – is standing on the side of the road in the middle of nowhere while we speak.

“We stopped to relieve ourselves behind a tree because we couldn’t find a toilet,” she begins. “Did you know that in Holland you have to pay between 10-30 euro to pee, so we always go behind trees there, as well. There are a lot of people around so sometimes it’s hard not to be seen, you know.”

You are off on your annual Christmas adventure/tour. How has that been going?

“Very good, yes, we’ve had a really nice time,” Mourne says. “It has been lots of fun, although the pantyhose fanbelt on the Morris broke. A lovely young man from Byron Bay stopped and fixed it for us – using one of his dreadlocks as the fanbelt. He was so nice that we have become friends. It’s certainly an interesting fibre; it’s the oil in the hair that keeps things smooth around the fanbelt.”

Of course, it won’t be all Christmas songs that this sisterly trio will be offering audiences.

“We do a couple of Christmas numbers in there that you’ll all know – Santa Claus wrote one of them – and we’ve got some brand new songs that we’ve learned especially for the occasion,” Mourne explains. “We’ve got Daft Punk, Lady Gaga, ABBA, Nana Mouskouri, June Carter-Cash, Enya, Gotye and Sia… there’s one by The Carpenters… and there’s lots more, yes. There’s one by a man who dances like a horse and one that says Hey Ya a lot.

“We’ve got quite a lot of songs that we’ve learned from the wireless, even one we wrote ourselves for the concert, about our mother making us do the chores. It’s a chore song about setting the rabbit traps and then bleeding them for the black pudding she used to make.”

Tell us about The Honouring Of The Treasured Items.

“We are travelling with our Christmas puddings, our ‘devils on horseback’ and some other lovely treats. Sometimes we even share our biscuits that we made with the audience.

“We even had five people come to our show the other day all dressed as us,” Mourne says. “They called themselves The Cheese Kranskys. They were all dressed the same as us – of varying heights – and they all had names of cheese. Isn’t that nice? It really does make us feel very special. We’re very lucky that they like us, you know, because it feels like a real Christmas family, which is nice.”

Do you think that your [late] mother would approve of you touring and performing?

Have you ever thought of trying pole dancing yourself?

“Well, there’s the Hills Hoist is tempting sometimes,” Mourne says. “We do have a tradition where we dance around it when we don’t get anything for Christmas. We do a maypole dance with three red ribbons around the Hills Hoist to take our mind off the sadness of not receiving a present from Santa. This happens every year so far, but we hope that this changes.

“The other day at the signing table, we were given some lovely fascinators made out of kitchen scourers, which was lovely,” she adds. “We wore them in a picture with The Cheese Kranskys, who gave them to us.”

Always being on the road, what is your favourite thing that you like to take everywhere?

“We always like to take a large pumpkin with us, because it keeps us fed wherever we go. But our most favourite thing is our portrait of The Queen; she’s like a mother figure to us. We like to put her portrait on the stage with us, as one of our things.

“I’m just asking Eve what her favourite thing is, but she’s a bit slow today. Sometimes she lives between yesterday’s lunch and today’s breakfast [laughs] – like a fish in a small tank.”

“Yes, well, we’ll be sharing our stories about Christmas at home in Esk,” Mourne says, “and we’ll be bringing all of our instruments with us: the cheese grater, the toilet brush will be out again, we got the tuba and the saw, the old ‘50s keyboard and the musical saw will all be featuring, and we’re really looking forward to doing all of our new songs for you. We’re looking forward to sharing our Christmas with the people of Adelaide… it will be lovely.”

Head to The Kransky Sisters’ Facebook page for further information and to check out some of their informative cooking videos.