Absolutely 80s – Made In Australia Show: Let’s Get This Party Started! ~ Interview 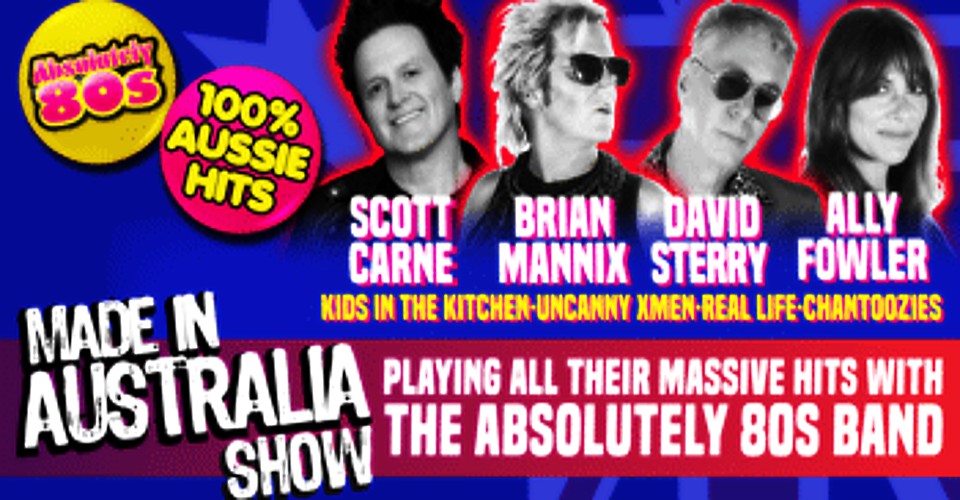 Ahhh the 1980s! For a long time the Eighties was referred to as the ‘decade that taste forgot’. The images of stone washed denim, massive hair, pirate shirts and ‘serious’ music fans in the ‘90s and ‘00s, scoffed at the hyper-pop, synth popstars of those years. This attitude always offended me. I love all that stuff. From Adam Ant’s highwayman, to Boy George’s confronting gender bending, the poodle-haired rock of Bon Jovi and Poison, it was an exciting time to be a music fan.

One of the things I found most exciting was the number of Australian acts that were banging out music that held its own against anything the UK or USA had to offer. INXS, The Divinyls, Men At Work, Midnight Oil, all did well on the international stage and our local pop groups were making excellent, world class shiny pop. Suddenly there were bands like Kids in The Kitchen, Real Life, Chantoozies, Uncanny X-Men and Wa Wa Nee, making great records that were getting played on the radio, being seen on the telly, gracing the pages of the teen magazines and selling out huge concerts on their own popularity.

Seems a million years ago doesn’t it? Radio stations playing music by new Australian artists, Music TV shows, locally produced magazines….being able to go to a concert! Well, take heart for this Friday night Absolutely 80s – Made In Australia Show is bringing the party to The Bridgeway Hotel.

Started fifteen years ago by Kids In The Kitchen front man Scott Carne, the idea is a perfect and simple one. A floating line-up of 80’s singers bang through their own hits and everybody else’s in a show which beautifully recreates the authentic sound of those bands and features the singers of many of those great and loved memories. This time round promises to be something very special. Joining Scott will be Uncanny X-Man Brian Mannix, David Sterry the singer from Real life, Ally Fowler from The Chantoozies and Steve Williams the guitar player from Wa Wa Nee.

Scott Carne is on the phone to talk about absolutely everything 1980s and Friday night’s show. When Kids In The Kitchen arrived in 1988, you got super big super quickly and that first album Shine was pure gold, but I have always wondered why This Is Not The Way was never a single.

“I think we went on Countdown and did it towards the end of the run, but by that stage we had released six singles off that album. Change In Mood, Bitter Desire, Something That You Said, Shine, Current Stand and My Life so that album was the gift that kept on giving. We worked really hard and toured endlessly. But then we kind of ran out of time to do the next record.”

Terrain didn’t do quite as well but had some fantastic songs on it, Out Of Control, Say It, Revolution Love was fun. Were there plans for a third album? I’d heard you had songs ready to go?

“Err, no,” Scott laughs. “After the second one we were done, probably by the time the second record was finished we were over it. We fitted like ten years of work into those four years of success. A lot of the time we were playing eight gigs a week, often jumping right into the van to get to the next place. Plus the press, radio and TV shows, I was run ragged. If I got a cold it would stick around for six or eight weeks because there was no time to recover.

“We signed to Sire Records in The States and did a few showcase shows over there but couldn’t get support to tour there. I think maybe Gudinski didn’t want us to leave Australia because we were making too much money for him here.”

After KITK Scott formed a rockabilly outfit called Priscilla’s Nightmare (who were great) and did a couple of solo singles All I Wanna Do and Freedom in 1990, which was a bit more UK clubby (a bit Soup Dragons) and went on to run a recording studio in St Kilda. In lockdown he discovered the tapes from his never released 1990 solo album and that looks set for release.

“It was a bit like finishing off old homework! They scrub up really well and I wanted to finish it just for myself, but I think we’ll put it out later in the year maybe,” he says. “At the time doing a solo record was just what you did when you stopped being a band. These days you would just take a break and you could do your other projects and then go back to the band, but you couldn’t do that back then. Josh Homme from Queens Of The Stone Age is in like 15 bands or something.”

Was there a time there were you distanced yourself from the ‘Kids’ era on purpose?

“In the nineties, the eighties were dead. Nobody wanted to know about anything from the eighties. But as time has gone by, there has been a turnaround and the eighties, and the nineties too, has got really strong music, interesting genres, artists doing interesting stuff and taking chances. In the 1990s you had dance culture, and grunge and Brit-Pop, and Triple J band culture in this country. Music in the 2000s seemed to be lacking that for me.”

Absolutely 80s brings a bunch of great eighties singer together with a top band and a lot of hits and much loved songs.

“This show brings out a kind of wow factor and the best of us and our past in a really fun show,” Scott says. “If you want to just see Kids In The Kitchen, we still do that occasionally, but if you want to see some big artists of eighties smash it out, come on and off stage and have a giggle with each other, then this is the show for you. It’s actually the Made In Australia Show this year, so apart from our own back catalogues it’s all Aussie hits of the eighties.

“Brian Mannix is doing James Freud’s Modern Girl and, would you believe, I am doing You Shook Me All Night Long by AC/DC. This line-up has never been to Adelaide before with David Sterry and Ally Fowler. Ally is an Adelaide girl, of course, so it will be great to have her with us.”

These shows always have a real sense of fun about them. The music is faithfully recreated but there is a vibe of not taking the images of the past too seriously.

“That is true,” Scott agrees. “We take pride in what we do, but we are revelling in the ‘80s and everybody is a bit older and greyer, but we leave the egos at the door. We notice there is a whole bunch of younger people coming too. People bring their kids along and stuff like that.”

That is one of the great things about this generation is they have the entire history of music at their fingertips and can investigate music from decades before they were born. And seem to have much broader musical tastes than older audiences.

“This is a two hour show and, as I say, I love it,” Scott says. “I love doing this so much; I love the idea of it and I’ll probably be doing it until I am Absolutely 80!

Book at Oztix. Click HERE to purchase your tickets.