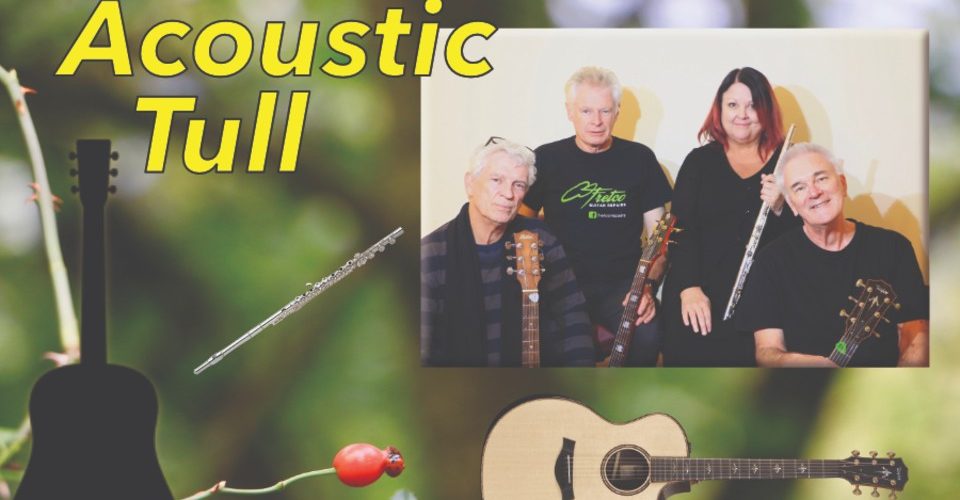 The musicians of Adelaide four-piece outfit Acoustic Tull all have one major thing in common – a love for the music of Jethro Tull. Expanding from a three-piece in January, the group consists of Michael Coghlan and Geoff Perkins (on guitars and vocals), Kerryn Schofield (various flutes, recorders and concertina) and Mick Ridge on bass. The group are set to play two shows at the newly refurbished upstairs room at the Brunswick Hotel as part of Adelaide Festival Centre’s Guitars In Bars Festival. We speak with founding member Michael Coghlan who begins by telling us how Acoustic Tull came to be.

“Guitarist Geoff Perkins and I knew each other through the Adelaide music scene – we had played together at the Seven Stars Hotel in fact and thought it would be cool to do an acoustic set. We soon realised our mutual love for Jethro Tull and the first song we tried just fell into place. Same with the second. So we thought we could play a set.

“We practised at first without a flute player which was strange,” he says, “but once polished someone suggested contacting Kerryn Schofield. Although I knew her music through her work with Ray Smith on his Trout And Toolbox CD I didn’t know she played flute. Turns out it’s her first instrument and she loves the music of Jethro Tull. So happily she jumped at the chance. For bass, we called up an old colleague of Geoff’s, Mick Ridge, who was happy to try this music which was a little different for him. And so Acoustic Tull was born.”

Is this a Jethro Tull tribute band?

“Not intentionally,” Michael says, “but inevitably when you spend so much time working on material from a particular artist you fall deeper and deeper in love with it because you come to understand it far more than you ever did, and you realise why it was so successful. I guess you could now say that Acoustic Tull is in fact a tribute act.”

“We didn’t want to be a band, and we wanted to have that ability to play in smaller venues. And I like the subtlety of acoustic music. I was also keen to present Tull music as something else apart from rock music. They were known as a rock band, but it was the softer, more melodic side of Tull songs that interested me more.”

What would you say to suggest people come see you play?

“They’re great songs that deserve to be given another hearing,” he says. “Ian Anderson, the front man of Jethro Tull, was a great song writer, exceptional singer, and he is a clever composer. So the music is full of really lovely melodies and there’s a kind of poetry in the lyrics.

“Also, our versions of these songs are of course – because it’s acoustic – different. They may sound similar to the songs that you may know and love but they’re different; we put together our own arrangements and I think they have evolved into really good interpretations of classic Tull songs. These are new versions of old songs that are faithful to the original intent and mood of the songs but also a really good reflection of the fact that you’ve got four experienced musicians applying their own set of skills to interpreting this wonderful music.

“We also have a lot of commentary about the songs so it’s not just playing music,” Michael says. “We tell stories about the songs to create some kind of background and talk about where that song sits in the history of Jethro Tull or perhaps how it represents what was going on in rock music at the time.”

For those that may have never had the experience of hearing them, what kind of music did Jethro Tull play?

“It’s been said that Ian Anderson, Tull’s principal songwriter, was basically a singer-songwriter or even a folk singer. In among quite raging rock songs there was nearly always this beautiful melody which you could extract and just concentrate on that. What Tull did was expand and build on that aspect of their music and integrate these melodies into rock arrangements.

“There were lots of songs at the time that were actually a combination of folk and rock,” he says. “Perhaps the most famous of this type was Led Zeppelin’s Stairway To Heaven – it starts out as a beautiful little folksy tune and becomes a raging rock song. Tull occasionally did similar things but what their music represents is a bridge between folk music or acoustic music and rock music. It’s really in that space between folk and rock.

“The longer they played they became closer to a true rock band. In fact they were one of the early exponents of a type of music which became known as prog (progressive) rock. They were the first group to release an LP (remember them?) that just had one song – Thick As A Brick. It was a very early example of progressive rock and it was 42 minutes long. We do an eight- minute version.

“But the songs are a mix of folk, pop and rock,” Michael says. “They’re very melodic with wonderful lyrics and as our promo says, ‘Immortal Melodies And Complex Rhythm’”. Marry that with Kerryn’s flute and I just think they are a joy to listen to.”

Book at guitarsinbars.com.au and eventbrite.com.au. Click on the web address to purchase your tickets.