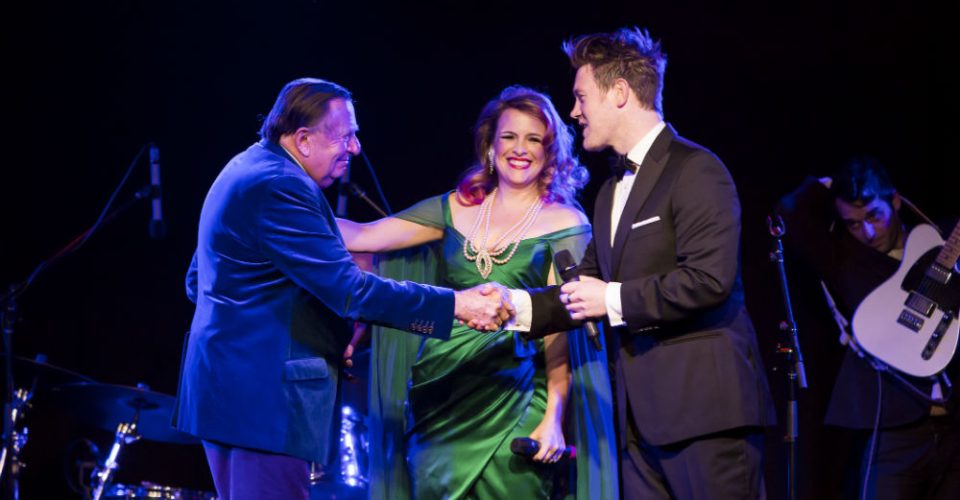 This year’s Adelaide Cabaret Festival had more than 350 artists performing with 46 sold out shows and was the highest grossing festival in its 15 year history.

With Barry Humphries at the helm the Festival has seen a 12% increase in box office from the previous year, highlighting the Festival’s continued and growing popularity.

“I am passing on the baton for next year’s Festival to two artists I hugely admire, Eddie Perfect and Ali McGregor, and my only advice to them break rules and select comedians who know when to get off! You will be backed up by a group of seasoned professionals whose support and encouragement has made this one of the most joyous experiences of my professional life.”

With many years of Cabaret Festival history between them and a strong working relationship, Ali McGregor and Eddie Perfect are two cabaret connoisseurs perfectly paired to take on the curation of one of Adelaide’s favourite winter Festivals.

As the new co-Artistic Directors charge headlong into planning for the Festival, Adelaide Festival Centre CEO & Artistic Director Douglas Gautier said; “We are absolutely delighted to welcome Ali McGregor and Eddie Perfect as our joint Artistic Directors for Adelaide Cabaret Festivals 2016 and 2017. They are well qualified as cabaret professionals to take the mantle from Barry Humphries who has given us such a memorable and successful Festival this year.”

Ali McGregor was recently afforded a Green Room Award for her contribution to cabaret and last year was nominated for an Aria award. Ali has a long standing love affair with the Adelaide Cabaret Festival, having first performed in 2009 with Jazz Cigarette, Late Night Variety in 2011, Alchemy in 2013 and kids cabaret in 2014 with Jazzamattazz.  This show enabled the festival to grow and develop its young cabaret audience, an important area for the festival’s future.

Ali McGregor says; “One night, during my first Adelaide Cabaret Festival in 2009, I turned to David & Lisa Campbell and declared that I finally felt like I had found my spiritual home… Later on, as I drove around regional South Australia with Kate Ceberano, I waxed equally as lyrical… I have had some career defining moments on stage in this festival and have been inspired beyond measure by some of my fellow artists.

“I remember watching in awe from the wings as Bernadette Peters showed us all how it’s done, singing Stephen Schwartz songs with the great man himself as my six week old daughter slept backstage, representing the festival in Hong Kong alongside the incredible Paul Capsis and even just last night witnessing Phil Scott channel Lionel Bart’s music and life making me laugh and cry in equal measure. I have now performed at six Adelaide Cabaret Festivals and each time my love for its eccentricity, quality and decadence grows and grows.

“This is a job I have dreamed of taking on, and sharing it with my good friend and colleague Eddie Perfect makes it doubly exciting. We have known each other for around 10 years and I have so much respect for both his talent and his artistic vision. I look forward to working with this most incredible team on what I believe is truly the best Festival in the world. Viva la Cabaret!

Helpmann Award winner Eddie Perfect is one of Australia’s most diverse, respected and prolific writer/composer/performers. Eddie is no stranger to the Cabaret Festival having performed in the 2003, 2004, 2007, 2012 – 2015 Festivals.  Eddie first appeared in Julia Holt’s Adelaide Cabaret Festival in 2003 with Cliff Hanger: Catch a Falling Star, in 2004 with Angry Eddie, he presented Shane Warne The Musical in development in 2007, Misanthropology in 2012, Shane Warne The Musical in 2013 and collaborated with Tripod in 2014 with Perfect Tripod.

Eddie Perfect says; “The Adelaide Cabaret Festival and I go way back. Almost every year since 2003 the festival has been a training ground for me; a source of inspiration, a connection to creatives all over the world and a place of passion and risk. I’ve performed my black musical comedy to terrified audiences at this Festival. I’ve pinched myself and soaked up inspiration like a sponge working alongside Jason Robert Brown, Andrew Lippa and Maltby and Shire at this Festival. I’ve premiered new musicals in workshop and brought them back with full orchestra at this Festival.

“I can honestly say there isn’t a festival in the world I love so unconditionally as the Adelaide Cabaret Festival. It has been my muse, my teacher and my support. To be given the great responsibility of shaping the creative future of the Adelaide Cabaret Festival is literally the stuff of my dreams. I’m passionate about supporting new writing and new writers, bringing together the best of what is happening on the cutting edge of musical story-telling whilst honouring and celebrating the past.

“I couldn’t be happier to share duties with Ali McGregor; there is no-one more intrinsic to the international world of cabaret than Ali. From the largest stadium to the tiniest tent, I don’t think there’s a single artist on this planet that Ali doesn’t know or hasn’t worked with. We’re excited about creating a festival that makes a striking connection to Adelaide audiences, conjuring up dazzling world premieres, unexpected collaborations and world-class new works from Australia and all over the globe.”