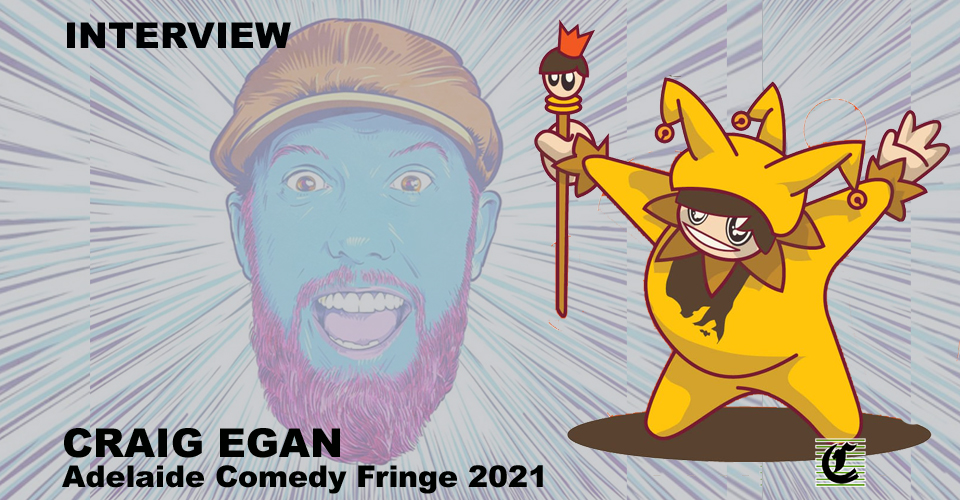 For, well it seems like forever, Craig Egan has been guiding the good ship Adelaide Comedy through the high seas and low tides of the stand-up comedy sea in Adelaide. He started out as a comedian, but found his niche as the hardest working man in funny business, by running comedy nights, acting as mentor, guidance councillor, agony aunt and building a reputation as an all-round top bloke not only, locally and nationally but with International touring comics, who often call Rhino Room (AC’s base of operations) their home away from home. Just about every comedy act that has ever walked on a stage has graced the Rhino Room stage at some point or other. I say just about, but more of that later.

There hasn’t been much to laugh at in the last 12 months, and we ask Craig Egan to share how has the last year has been for him and Adelaide Comedy.

“Well we downsized what we were doing with Adelaide Comedy over the last couple of years. I was doing four nights a week, organising corporate and country gigs and other things as well. But I have two kids now, aged one and three, and my partner works full time so I have been a stay at home dad for the last few years.

“I do a comedy show on a Friday night at Rhino Room and Adelaide Fringe every year. So when COVID hit I’d already pulled back what I had been doing, so the timing was not as bad as it could have been. We are hoping later in the year that we can crank some of the other things back up, but we’ll see.

“We started back doing reduced capacity gigs in July to a really lovely vibe from both the comedians and audience members. Even veterans were grateful to be on a stage like new crew getting up for the first time. The audiences were so happy to be out of the house.”

How frustrating has it been watching the authorities go, Oh, 20000 people can go to the footy – no worries, we’ll fly in 1200 tennis players to do sport, but nobody is allowed to dance or (I assume) laugh too close to each other.

“I would be frustrated but I have come to expect this. After twenty years in this game you know you are the first to go in a pandemic. We scraped in by the skin of our teeth with Fringe last year. But they day it finished it was like. ‘You guys are out. You are trying to make a bunch of people expel air out of their face holes and that is not good for what we are looking at’. Also very aware that sport always wins in this town and always has. I think for some people it’s been a weird sort of enforced long service leave they would never have otherwise got. A lot of people have used the downtime to refocus or reimagine, because you don’t often get the opportunity to take such a major step away from your life.”

Considering a ‘normal’ Fringe for you guys is utterly maniac, how do you even plan for the 2021 Fringe when everything is in constant flux, with borders shutting and so forth?

“We run three rooms at Rhino Room, the main room upstairs, The Drama Llama and Hell’s Kitchen downstairs. The Alley Cat that we had last year, which was a tiny broom closet room for twenty people we couldn’t make work at half capacity so we are not doing that this year. We also have The Howling Owl and some shows back at the Marion Hotel again. So we have gone into with an agreement with our acts that we were going forward as if it’s all happening, and if it doesn’t, we won’t charge you for the room hire. It’s the only way we could move forward while also being prepared for the fact that things could change at a moment’s notice. But if something happens and the shows get cancelled, you don’t pay for the room. We have had a couple of cancellations already Demi Lardner can’t make it and Rhys Nicholson too.

“Bringing a show to a Fringe has a lot of costs, like travel and accommodation etc., but we wanted to work with our acts and try and make our bit as painless as possible. So everything happened later, we have done a digital version of the booklet this year instead of a physical one (link below). And we had acts dropping in and being added and that will probably change throughout the run too. So, get in and see stuff early is my advice!” Craig laughs. “Perth found out the hard way, so grab ‘em while you can.”

Craig is referencing the fact that in the middle of January’s Perth Fringe the entire state went into lock down cancelling seven days of hundreds of shows, some of whom were only doing seven day runs.

“So, for us, we are going to suck it up! We will get as many of those shows on as we can and if the day comes we get told to shut down, that is what will happen. Everybody is frustrated, but nobody is pissed off, how can you be? We are all just trying to work it out as we go. This is a tough enough art form to make it viable before the pandemic and having to run on 50% capacities, but right now everybody is just desperately trying to support each other.”

Heaven knows people need to laugh at the moment. Experiencing the collective joy of a room full of people being that happy is so crucial at the moment.

“People come up to me all the time and say ‘Comedy saved my life. I had a place to go, to hear other ideas, in a moment of darkness I found some light.’ I mean we are not doctors but there is no doubt that at its best comedy put a positive energy into the world… at its worst though… […laughs]. We tend to schedule people we know, or people we have researched or been recommended to me by people we trust. We want to work with good people.”

How many shows over the four rooms this year?

“We started with about 44 shows and sixty comedians, but that constantly changes with cancellations and additions. I’ll tell you at the end of the Fringe! I think we counted up over 300 performances over four rooms – there is a lot going on.

“Even with such a tough time, we have one of the best line-ups we have ever had. Paul McDermott, Becky Lucas, Jeff Green, Nazeem Hussain, Lehmo, Nick Cody, Randy, Lewis Garnham and that is just upstairs at Rhino. Downstairs we have Lorie Bell, Fabien Clark and the Howling Owl has Jason Pestell, Kelsey De Almeida, Amy Heatherington is complete legend from Darwin, Jillian English, a lot of crew.

“Another thing that is different this year is we are not doing a printed booklet; it’s completely digital so save a tree totally COVID free. It looks like a book with links for booking and each acts social media pages, it is very cool. It is really worth looking at it as well as the on-line Fringe guide because the way things have happened this year there is a lot of acts that didn’t make it into the Fringe Guide who are now coming. McDermott isn’t in there and neither is Simon Palomares who has just joined us, so the hot tip this year is to keep checking those on-line Fringe guides people.”

Rhino Room Late Shows and Fringe shows are absolutely legendary. You never know who will turn up to do guest spots but in the past everybody from Ross Noble, Tripod, Stephen K Amos, Cal Wilson, Hannah Gadbsy, Eddie Ifft, Wil Anderson, Sam Simmons and Justin Hamilton. The Late Show continues this year on Friday and Saturday nights.

“I think I can now safely say that it is the longest running Fringe show in Adelaide; this will be our 21st year. It is always crazy and we have had everybody turn up and do spots, especially on that last Saturday night of Fringe – anything can happen and often does. Actually a funny story about Paul McDermott is that he has never played the Rhino before. He’s come and had a drink with us, and one year I said ‘We’d love it if you wanted to get up and do a spot in the Late Show. You are one of the only people we have never had.’ He looked at me and smiled and said ‘Well….I’m never doing it now.

[Edit] Fortunately, he broke that promise and on Sat 27 Feb, and Paul McDermott performed on the Rhino stage with friend and guitarist Glen Moorehouse. This is an excerpt from Craig Egan’s Sun 28 Feb FB post [Ed.]:

“Last night he broke that promise in such a spectacular fashion and along with his plus one Glen absolutely filled the Late Show with so much freakin Joy! When I told him this story he said, ‘You know 5 people have already told me this story tonight.’ Damn you McDermott you always have the upper hand.”

The Adelaide Comedy Fringe Guide 2021 can be found online. Click HERE to go there.