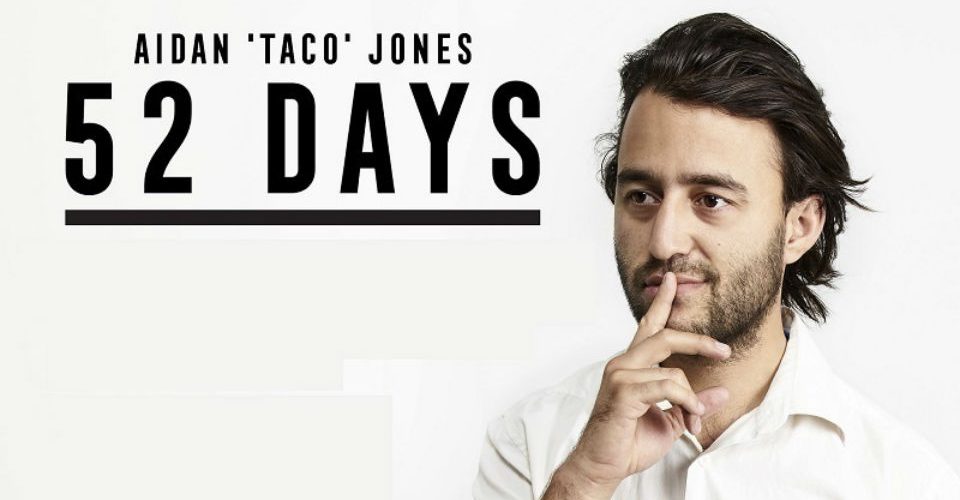 Aidan ‘Taco’ Jones lived here in Glandore until moving to Melbourne to develop his career in comedy. He returned for the Fringe last year and is back again this year with a new show – one that will reflect on a year of his life that began in Adelaide.

We speak with Aidan, via email, to find out more about 52 Days, and begin by asking him about last year’s offering called The Abersham Flat which recalled his time living in a squalid flat in London and if 52 Days is similarly autobiographical?

“This show is absolutely autobiographical, yes. Although I feel like a major difference between last year’s show and this one is that last year I spent a lot of time focussing on the problems of my housemate in London. This time around most of the jokes are directed at me, even if it is a younger version of me. I’m getting closer and closer to finally admitting that the reason I end up in stupid situations is me! I’m the dickhead!”

You are developing a strong reputation as a storyteller as well as a comedian. Are the stories in this show are all true?

“Absolutely, the stories are true! I never flat-out make things up when I’m on stage, but at times I do simplify a story or omit details in order to get to a punchline. What I’m starting to realise about storytelling and stand-up though, is that the closer I stick to the actual truth of how I felt and my memories of whatever story I’m telling, the bigger the laughs will be. I think when you try and make things up, you lose a lot of the emotional depth that honest recollections have.

“I could tell you I lost my virginity on a single bed with wheels on in my childhood bedroom at my parents’ house in Glandore, and that’s all true, and kind of funny. But if I go deeper though and tell you the reason it was there is because I vomited at my girlfriend’s friend’s party, and to make it up to her, I invited her around to play her a song I wrote her on the piano… it’s a bit more embarrassing, but it’s also more personal, and the more personal you get, the more emotion there is for other people to connect to.

“At the end of the day, that’s how people relate to stories – not by having done the same things as the storyteller, but by having felt the same emotions.”

Please explain the title of this show.

“In 2012, my New Year’s Resolution was to limit my drinking to one day a week for the whole year. Every day I drank, I wrote what I did that day on a playing card – there are 52 cards in a deck and 52 weeks in a year, so I had 52 days of drinking so there are 52 days recorded on that deck of cards.”
You like to involve the audience in your shows in a non-threatening manner. In this case, the audience is given a card on entering the venue and you then select people at random to reveal what is written on their card. Does this make for a somewhat different show each night?

“It does and it doesn’t. It does in that different cards come up each night, and each of those cards has a story from a different day on it. The way I’ve written and structured the show, though, is that there are a group of stories that are essential – I preface them in the setup, and then in the show, because there are so many cards referencing the other people involved, I can always find my way into telling them.

“The cards are still very important though. About half-way through my Perth Fringe World run, my bag was stolen from Yagan Square in the city while I was flyering for my show that night. It was at 7pm, and my show was at 8:30, and along with my wallet, all my notebooks, and a bunch of other stuff, the cards that I use to do the show were in the bag, and there was nowhere near enough time before the show to copy out a new deck.

“That night I told the audience what had happened, and definitely felt their sympathy, but I tried to do the show in a silly way by handing out my flyers (which have a picture of one of the cards on the back) and then using the one, same card to tell all the different stories that night. I could tell by the end they felt like they’d been cheated, and the whole concept of the cards was a lie. It’s definitely not, though. It’s not completely random every night – although I do have some control over the stories I tell – but there is always an element of spontaneity to it.”

“The feedback I’ve had from most people is that they love the intimate feel that the cards give the show. The idea came from quiet evenings with close friends spent going through the actual cards and telling the stories over a drink. I’ve tried to preserve that feeling in the show, and to be honest that’s the way I like all of my stand up to feel anyway: conversational.

I understand the show is based around the year 2012 when you were living in Adelaide as a 20 year old. Will there be things that Adelaidians will instantly recognise? Is there anything slightly uncomfortable about performing this show in Adelaide, or is it all good memories?

“It’s definitely not all good memories! In fact, a few people have commented that they thought it sounded like a pretty awful year – I don’t think so, I like the chaos and those uncontrollable sagas. There are a few landmarks and venues that people in Adelaide will recognise from the cards, same as people in Melbourne will recognise some stuff as I moved there in July of that year. People from South America may also recognise the archetype of a drunken, early-20s gringo acting like a dickhead in their homeland… Yeah, they’re definitely not all good memories.”

Is there an underlying message beneath the jokes you make about your life experiences? Will we come away feeling uplifted?

“I reckon so, yeah. I don’t know that there’s necessarily an underlying message as there is a common theme to the stories. They all come from the same point in my life, and I’ve been performing them at this particular stage in my development as a comedian, so there’s bound to be some ideas that I find myself coming back to.”

Where have you presented 52 Days prior to Adelaide?

“I did 25 nights at Edinburgh Festival Fringe 2018, 16 nights at Perth Fringe World and
My Loungeroom in Melbourne which was three mornings in front of other comedians with notepads.”

‘Jones was brilliant on the night, 40 odd punters in a packed room, in raucous fits of laughter can’t be wrong.’ Tom Robinson   X-Press Mag.com.au