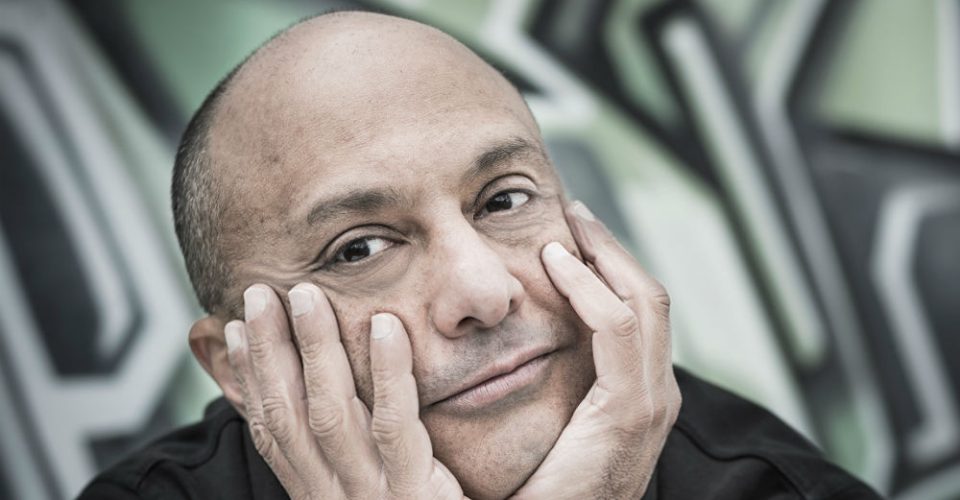 Hot topics? He’s got it covered. An affinity with the ridiculous? He sure does. Slightly offensive at times? Yeah, he can do that too. With more than 25 years of award-winning comedy, TV and acting experience to his credit, Egyptian-born Akmal Saleh absolutely owns the stage. Unfortunately he also owes a lot of money to the collectors and has opted to return to the stage to pay his debts over getting his legs broken.

We speak with Akmal on the eve of his debut performance at Dunstan Playhouse.

“Over the course of twenty-four months I tour the entire country, so I aim to have a new show every couple of years,” he begins. “This year I had to work harder as my manager put me into the Melbourne Comedy Festival two years in a row – and forgot to tell me [laughs]! So I had to come up with a new show really quickly. But the pressure was kind of good; having a deadline. Generally speaking, comedians are the laziest people on Earth, and I’m at the top of that list. I’m probably the laziest ‘human’ in Australia. So when I’m pushed to do it, I kind of just believe it will work itself out.”

“It’s called Akmal,” he laughs. “I like to keep it simple. Every tour I’ve done has been named Akmal. That way I never forget what it’s called. The other reason is because there are some comedians who do a show to a theme, but I’ve never been able to do that. Even when I’ve tried to theme it, I always end up dropping that and working on different material entirely. As long as I show up, people are generally happy with that.

“My style of comedy is not like those really well-written shows that are about something. It’s a different approach to that kind of one-man show. This is stand-up comedy; it changes every night in its mood and how the audience is reacting.”

According to the headline, you own the stage but owe a lot of money to debt collectors. Threatening to break your legs, you are touring to pay off debts. Is this true?

“I can’t remember who wrote that or if, in fact, I actually wrote that, but it was partly true when it was written,” Akmal says. “I recently appeared in I’m A Celebrity… Get Me Out Of Here. I was deeply in debt because, as it turns out, my accountant ‘forgot’ to put in my tax for two years in a row. My wife and I are a bit vague with money and owed thousands of dollars that we just didn’t have. So, it was either do that show or go to prison. As it turns out, I should have gone to prison [laughs].”

Was being on the show really that horrible?

“Yes! And for many different reasons,” he says. “For starters, you’re in South Africa by yourself with some people you’ve never met before. It’s hot, over 35C degrees every day, and we were under a tarpaulin that we weren’t allowed to go out from under. Then there are the TV lights that are on us all the time. Not to mention always being hungry. But the worst thing is not knowing how you are being portrayed to the viewers. You can say a lot of things in the course of the day but it’s up to the producers how they edit it.

“I’ll never do anything like that ever again,” Akmal adds. “I feel like I sold my soul to them. Every time I try to watch it I get a physical pain in my stomach.”

Does this experience feature in your show?

“A little bit. It’s hard to avoid as it was such a big part of my year… and, without a doubt it was the weirdest thing I’ve ever done in my life. I have moments where I wonder if it was real or a dream.”

You are very interactive with your audiences, and your longevity on the stage makes it look so easy and casual. But there are those audience members that believe their ticket gives them a speaking part in shows. Have you ever had a heckle that you’ve had no comeback for?

“Some nights, like sports people, you are either on your game or not,” Akmal says. “Sometimes it won’t be until I’m on my way home before come up with a brilliant line that I wish I had said.”

Hindsight is a brilliant thing, isn’t it?

“Yeah! And then there are those other nights when I’m so on top of it all, to the point you could almost predict what people are going to say. How that works I’m not sure; sometimes you are in the right mood or the audiences are putting out the right energy, which lifts you and has you working at your best.”

Or maybe it’s because the moon is not in retrograde with Taurus and there’s an Aries eclipse somewhere in the world [laughs].

“It’s always Taurus that fucks me up!” he laughs. “Taurus and comedians never really see eye-to-eye [more laughs]. But I’m a total believer that so many things that we do and our behaviour is controlled by higher forces. I’ve experienced it; some nights, for no reason, I’ll be firing on all cylinders and other nights I can’t string my words together without concentrating really hard.

“In my heritage, I remember as a child the women getting together and spend hours reading tea leaves,” Akmal recalls. “Particular specialists would come in – some of them were frighteningly accurate. An aunty of ours used to be possessed by the spirit of Saint Helena. She was blind and would be led around by the spirits as she made her predictions. Everyone believed her and never thought she was crazy because it was just part of the culture. And her voice would change really clearly. We were in a world that was more open to that.”

“I should mention my friend Joel Ozborn who is touring with me. Everybody loves Joel. He’s like the Jesus of the comedy world. He’s a wonderful man and I’ve been touring with him for many years. Joel’s got a bit of a following in Adelaide, and he’s also really good looking – which is why I hate him [chuckles]. For that reason, it’s a dangerous thing having him on tour with me.”

Click HERE for your chance to win one of three double passes to see Akmal on Fri 15 Jul.