Darren Percival: Love Is All He Needs… At Adelaide Festival Theatre – Interview 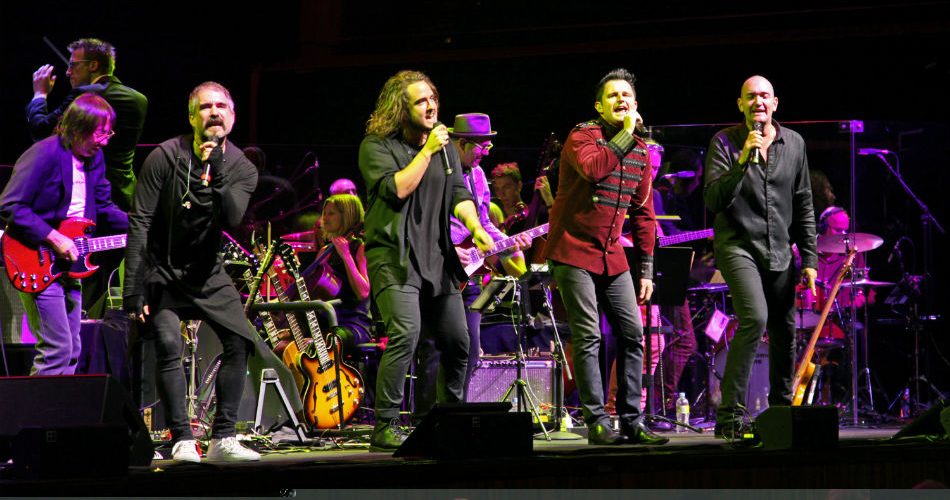 All You Need Is Love, a “spectacular live concert experience” featuring orchestral and rock arrangements of 30 songs made famous by The Beatles, continues its 2016 season when it arrives at Adelaide’s Festival Theatre in early February. Produced by Phil Bathols and Tim Woods, this concert showcases the vocal talents of Darren Percival (The Voice Australia 2012), Jack Jones (Southern Sons), Ciaran Gribbin (INXS) and Jackson Thomas (The Voice Australia 2014). We catch up with Darren on the eve of the first Sydney performance of the show.

“I’m at the Woodford Folk Festival right now, near Maleny in the Glass House Mountains in Queensland,” he begins. “I’ve got a tent up here and I’m coaching people to sing with me. It brings a lot of joy to my family and all the people that we connect with here. It’s an amazing experience; very powerful. I love it. I’m doing this for seven days and then I start in the [Sydney Opera House] Concert Hall on Saturday. This year we get to take the Beatles show on the road to Melbourne and then over to you guys, which will be fantastic. I love working in Adelaide; I can’t wait to get back down there. It’s a great part of the world.”

How have you enjoyed rehearsals and your other preparations for the show?

“It’s been a joyful experience from where I’ve been standing,” Darren says. “The material is so powerful. I’m such a huge fan of The Beatles. We started in 2015 with All You Need Is Love so to get back together with Jack, Jackson and Ciaran is great – we’ve become really good mates. In fact, the whole thing’s been great; there’s a really good team of people involved. Paul Gray (Wa Wa Nee), who’s been a mate of mine for 20 years, is in charge of the electric part of the band. And Nicholas Buc is the conductor of the orchestra. They are both amazing musicians and the whole thing has been really good fun. I’m just so happy to be part of it.

“It’s a great way to start the year and the fact that we are touring is exciting for us. We finished last year’s season and thought then that we should take the show on the road.”

Have there been many changes to the show as it was seen in 2015?

There seems to be a unique, uplifting quality within The Beatles’ music.

“Doing a show called All You Need Is Love is a perfect fit for these times, I reckon. We should be celebrating happiness, happy things, and singing Beatles’ songs. We’re channelling something very powerful – there’s never really been anybody like them. I just jumped at the chance to part of this. To be putting love back, with energy, into the world; it’s really important.

“The great thing about the show too, it’s not just what happens on stage – the guy on the desk is pulling some really amazing sounds. It’s abundant sonic bliss.”

Do you have a favourite Beatles’ song?

“I like And I Love Her – it’s not actually in the show but I love singing that song; it’s great,” Darren says. “In the show; I sing Something by George Harrison; it’s so amazing, standing on stage singing that song. I get to sing Goodnight, which Ringo sang as the White Album’s finale. And I also sing Across The Universe. It’s a tricky one to remember because there are so many weird lyrics in that song. I mean, they are weird but amazing.”

There’s no shortage of Beatles-oriented shows being performed. What makes this one special? What will people like most about it?

“I think it’s a combination of things. The show features some of the best musicians in the country, and there’s also the collaboration between the four of us. The orchestration is great. Then there’s the way it’s been set. I think all of that, combined with the music, makes it really unique.

“It’s just us, doing our thing, in a really honest way, paying much respect to the original versions,” he continues. “We’re singing their songs, and we’re honouring the music.

“If you look out into the audience you can see three or four generations of families sitting there. People have brought their kids, their mums, their grandmas… It’s great that the kids get to see it live. They can’t see The Beatles live but they can hear the music. People are laughing, crying, dancing; it shows what really great time it is for them.”

How well do you know the other guys?

“I met Jack Jones when I was a kid,” Darren says. “When I was about 16 his band came up and I went and saw them quite frequently because I loved his voice. I met Ciaran and Jackson through mutual friends. And then we all connected through this show – we became mates. I went from fan to friend with Jack.”

What have been your highlights of the last 12 months?

“My son started school. That was the greatest thing that happened. My daughter starts next year. It’s a really exciting time for me; it’s really amazing in our family at the moment.

“Musically, I started producing artists I really believe in, paying it forward. I’ve been writing, and working on other projects – I had my own radio show, Up Close And Percival and that went really well; that was great. I’m blessed, I’m the lucky one, I love my job. I have an amazing group of people around me; I continue to work.”

And what’s next? Any irons in the fire?

“I’m going be focusing on the singing work that I do with companies, and with kids, mums and dads. It’s similar to what I’m doing up here at Woodford, really: coaching people to sing. I’ve become a motivational singer. If there isn’t such a thing then we’ve just created it!

“So, yeah, probably just working on becoming the world’s first motivational singer,” Darren concludes. “Getting people motivated to sing. That’s my goal for my life; that what I want to do. I’m focusing massively on that from now on.”

All You Need Is Love performs at Festival Theatre from 8pm on Fri 5 Feb and Sat 6 Feb.