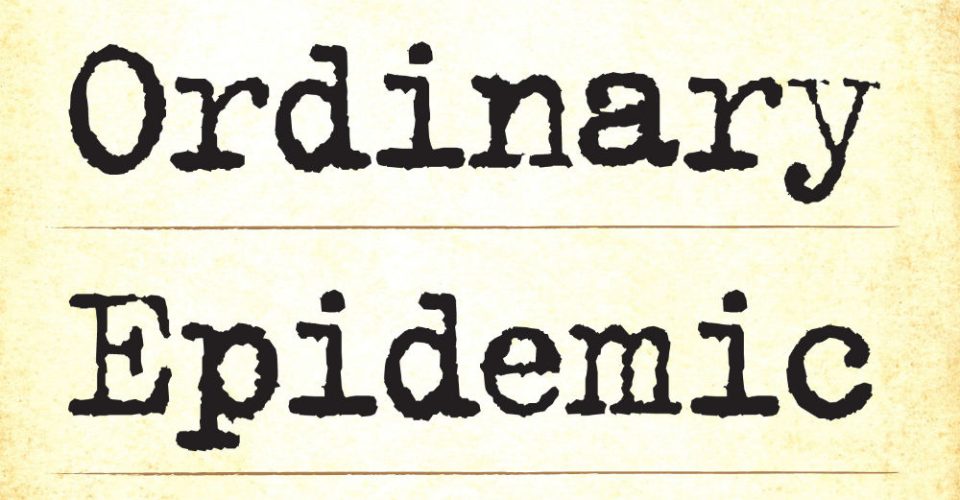 Amanda Hickie’s novel An Ordinary Epidemic is being launched by Adelaide’s MidnightSun Publishing this week. We chatted via email with Amanda about her novel, in which a deadly epidemic sweeps across the globe.

Amanda talks about falling off the ‘word wagon’, self-publishing her first book and her lifelong quest for answers to ethical dilemmas, but we start out by asking her to tell us about An Ordinary Epidemic.

“The novel follows a family in Sydney during an outbreak of a fictional disease, from the point of view of Hannah, the mother,” Amanda explains. “At the start of the book she’s a little obsessive and cautious, but even so as the epidemic grows, she finds herself in situations, particularly situations to do with people, rather than how much food is in the pantry, that she hasn’t prepared for.”

Where did the idea of writing a story about a deadly epidemic come from?

“Around 2002 I was living in Ottawa, in Canada when the SARS outbreak happened in Toronto and it all seemed so close. Even though everybody expected that it was just a matter of time until it spread to Ottawa, we all went on with our ordinary lives,” she says. “Around that time I read Jonathan Swift’s A Journal of the Plague Years and once you get past the archaic language, there’s that same feeling. He’s listing exactly how many people died that week in a parish on the other side of London, while, at first at least, life went on as normal all around him.

“I was in the middle of writing a different novel, so just put the idea aside. Six or seven years later, after I couldn’t get the first novel published, I decided that if I really was a writer, then I’d just have to keep writing. I sat down and made a list of every idea that had been floating around my head for years, and the epidemic was the one that grabbed me.”

An Ordinary Epidemic is rich with ethical dilemmas. Hannah is forced to make tricky decisions that challenge her ethics and her powerful desire to protect her family. What is it about this type of dilemma that interests you? 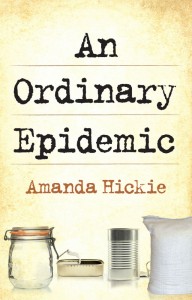 “Not long after I started writing An Ordinary Epidemic I got involved as a volunteer teacher with the Primary School Ethics program here in NSW, but it was something I was always interested in,” Amanda explains. “I got kicked out of Scripture at school because the teacher thought I was being a smart alec. I kept asking questions like ‘if you know someone is going to murder someone else, is it ok to lie to the murderer about where they are?’ I suspect I was pretty annoying but I genuinely wanted to know! I didn’t know then cleverer people had been arguing about these things for centuries.

“But while I was teaching ethics to nine and ten year olds, something that I had already been thinking about became really clear to me, which was that concepts of absolute right and wrong take us only so far. The really interesting discussions come in the grey areas – is it ok to steal medicine to save someone’s life if there are no other options, and what are the consequences if you do? I think if we haven’t thought about our moral values at that level, we end up making gut decisions in the heat of the moment, and history and psychology tells us those are not always decisions to be proud of.”

You’ve been quoted as saying that you wanted to write about ‘family and joy’ and that you want to present an image of boys that challenges the stereotypes you often read. I think An Ordinary Epidemic certainly does that. There are lovely backyard soccer scenes, for example. Why were you interested in presenting this perspective on families and boys?

“The younger of my two kids is finishing high school this year so I’ve had lots of time to observe them and their friends. But one of the things I found most interesting was other parents. It’s so easy for us to fall into a ‘kids these days’ attitude and treat our kids as unrelatable aliens, but the fact was that when I thought back on what I was like as a teenager, my sons’ friends are, as a group, nicer and more thoughtful than my friends and I were.

“I remember seeing Little Miss Sunshine, and the teenage son was a revelation. Here was a teenage boy who, while nothing like the boys I knew, was portrayed as full and rich as any of the adults. And I think happiness, especially happiness in context of families, is a really difficult topic. We all want it and we all have the suspicion that other people know the secret to getting it.”

“After I’d finished An Ordinary Epidemic I realised that however attached I was to AfterZoe, at that stage, no one was going to publish it. So I had two options, leave it on my hard drive or self-publish,” Amanda says. “Even a few years earlier self-publishing was hard and costly but with Createspace, Kindle Direct, Lulu, Smashwords and Draft2digital, getting it out there is so much easier. That doesn’t mean anyone will read it. I think self-publishing is easier for books that fit more directly into a genre and I know there are people out there being successful, but I never really cracked how to build an audience.

“That having been said, a few people did read it, I got reviews on Amazon and Goodreads, and the feedback I got both from friends and strangers gave me a whole new enthusiasm. When I’m having terrible doubts, those words are useful to go back and reread.”

What can you tell us about your writing process?

“When I’m writing I set myself word quotas, starting quite low but ramping up over a few weeks as I get into the book. But one thing I learnt is not to beat myself up if I fall off the word wagon. It’s more important to just get back to it.”

In the past you have written plays, but you say that you now prefer to write novels. What is it about the novel form, as opposed to plays, that you like?

“On a purely selfish level, I can write a novel and finish it without needing actors, directors, set designers to make it complete!” Amanda says. “But I’ve also found more scope for really getting inside the mind of a character. So much of what we communicate and feel is through our physical sensations and the way we physically react to things around us. We are so much more than just the words we say. I think you see that with great actors. Their words might be very simple, but we see their inner life through non-verbal means. I like doing that, but with words on a page instead of on a stage.”

What’s next for you? Are you working on another book?

“I’d started writing the next novel before MidnightSun offered to publish An Ordinary Epidemic,” she replies. “My dad used to say that if you expose ideas too early they shrivel, and this one is not well enough formed. But it’s going to have a little more of the magic realism that’s in AfterZoe, while being more firmly rooted in the real world like An Ordinary Epidemic.”

An Ordinary Epidemic is being launched at the South Australian Writers’ Centre, Second Floor, 187 Rundle Street, Adelaide from 6.30pm on Fri 8 May.

All are welcome. Drinks and nibbles will be provided, and Amanda will be there to sign copies of her new novel.

For more information on Amanda Hickie, visit amandahickie.com and check her out on Facebook Page ‘Amanda Hickie – Writer’.