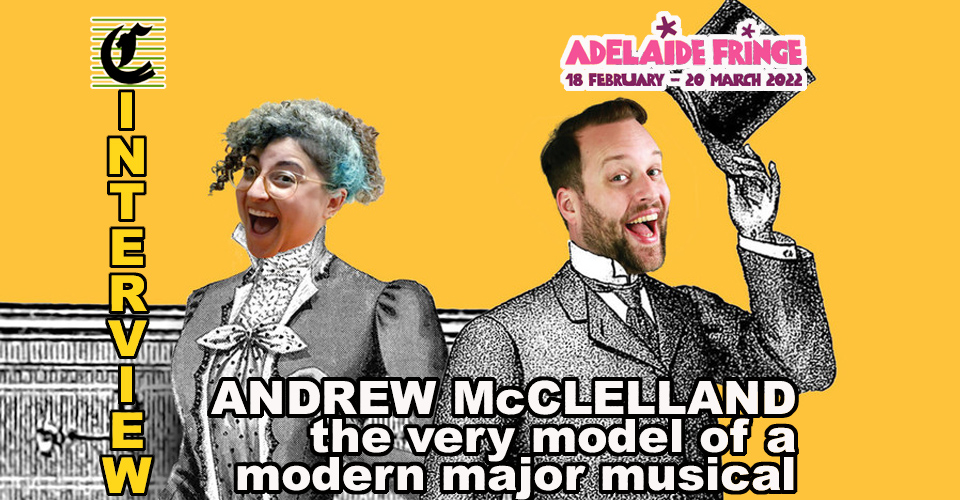 Andrew McClelland is somewhat of an institution in his in home town of Melbourne. He is a stand-up comedian, one of the best DJs you will ever see on the decks and his regular Indie club McClelland’s Finishing School is absolutely beloved. He is a snappy dresser (‘I always try to wear a suit, except when I am making love to my lady….then I wear a tuxedo’), an enthusiastic dancer and was chosen to be the opening act on Cher’s last National Tour where he pranced and danced across the stage warming up the audiences and culminating in Cher presenting Andy with a birthday cake and singing Happy Birthday to him.

The last two years have been tough for somebody whose life revolves around performances and an audience, but Andrew has found ways to keep doing what he loves, DJ-ing on-line and doing comedy via Zoom (his Sit Down Walking Tour of Europe – was masterful) and he found time to write a complete original Gilbert & Sullivan musical which he is bringing to Adelaide for four shows only.

Speaking with Andrew, we ask why – in this world of high-speed everything and ultra-modern social media platforms – did he write a classical original Gilbert & Sullivan-style musical?

“Since you put it like that, I am suddenly regretting it,” he begins. “Perhaps it’s not too late to write something else…? But… it’s in the guide now so… I guess the reason I decided to do it is, firstly, the tunes and the music is banging! The show is a great comedy; it’s all very light-hearted, with fun and absurd scenarios.

“I think that G&S informed things like Monty Python in the same way they inform so much comedy now. It’s intentionally silly and ridiculous. There is a movie about them called Topsy Turvy, which is how they described the world they wrote about – with plot twists and ways to get out of and into things. I saw The Gondoliers last week; it’s a mad story with child brides, mysterious lineage, true love and gondoliers.

“I sent some modern music to an old man friend, and his response was ‘I like it but the lyrics in modern music are all so…sad. After the war, the world was so depressed that we only wanted to listen to positive, happy music’. And I think that he makes a good point. It wasn’t until the sixties and seventies things took a serious and negative turn – much as I love a lot of music from that era. And even today, there is so much negativity in the world, COVID, income inequality, Trump and all that stuff. I find I want some happy media too.”

There is a lot of wordplay and rapid-fire delivery of complex lyrics to a jaunty musical accompaniment of a Gilbert & Sullivan show.

“It was has been called the ‘origin of rap music’ because of that,” Andrew says. “I don’t know if that is true, but I can see the parallel. The wordsmithery is something that drew me to G&S initially. For this show I have taken the original music of G&S and written completely new lyrics and I had the best time doing that, with my trust rhyming dictionary and working out what to rhyme with…lozenge or whatever. Not enough songs about lozenges.”

Has this love of Gilbert & Sullivan always been with you? Did it come from your parents perhaps?

“Yes,” he says. “We’d go on these long family car rides from Melbourne to Brisbane and we’d take turns with the music on the tape deck. My sister was more of your Andrew Lloyd Webber, my brother was The Smiths and The Cure and my parents were Gilbert & Sullivan. So I heard their stuff a lot.”

Does that car memory mean G&S has a subliminal connotation of music that is moving forward?

“Wow! That is a really good question. Perhaps it does, especially as to many people G&S would seem to be moving backwards rather than forwards. I’ve never thought of that before.”

You have done a lot of shows in the past that are history-based comedy lectures. Do you feel that your brief time as a high school teacher help to inform you?

“I guess so,” Andrew says. “I did that job until I worked out it was really, really hard! I loved teaching but I hated wrangling kids. Sometimes you have to tell them off and I’m no good at that. I was never comfortable having to tell kids they are not doing well. I’m a pretty positive person.”

You embrace a lot of ‘ye olde world’ things; you are often spotted donning a suit, and you smoke a pipe. So, what is it about the distinctly ‘un-modern’ that you seem drawn to?

“A lot of people have feel nostalgic about things from the past and it might seem a little ridiculous to have nostalgia for a time that you weren’t there for. But there are plenty of young people who love the sixties music (or even the eighties) that were born in the ‘90s or 2000s. I love nineteenth century style. There are even Pinterest accounts for people who dress 18th Century style, 1920’s style and penny-farthing bike clubs. It’s a kind of romanticising of a different era.

“I am really aware there was a lot wrong with Victorian era Britain,” Andrew says, “particularly the colonialism and the sexism,  so in writing a contemporary Gilbert & Sullivan show, one of my first aims was to cut those elements out. It’s in a more modern setting, a contemporary law firm office, and the IT department has to take part in the office football competition. They are doing it to impress the interns, who are the other chorus. So it is a modern story but deeply rooted in G&S music and tropes.”

Your collaborator on this show, Martine Wengrow, is a very well-known composer, conductor, arranger and works with large orchestras, in the theatre and on television.

“Martine is amazing,” Andrew says. “Originally, I was looking for an accompanist who could play the music while I did the show, which is kind what I do. But as soon as she got on board she was so enthusiastic and full of idea, ‘oh we could do this and what about that’. She is actually too good for this show. She is an amazing musician, and arranger, and composer and teacher. It is an honour and a joy to work with her.”

What do you want people to know about this show – especially those who might scrunch their nose up at the idea of Gilbert & Sullivan?

“This is a comedy show,” he says. “The truth of the matter is I wrote a full Gilbert & Sullivan production that goes for two and a half hours, has a cast of ninety and an orchestra of seventy. It’s there. It’s all written, but nobody is going to produce that – especially at the moment – because a show like that costs millions to stage. So I decided to do a one man (and one woman) one hour version of it and the audience is the Australia Council that I am begging for funding to stage the actual show on. So I get to do excerpts from the show, explain who G&S are, crack a lot of gags, there is a lot of stand-up about the arts scene at the moment and how hard arts funding is to get. So it’s a pitch to get funding.

Lest people think Andrew is just nothing but olde world charm, it is worth mentioning he is an exceptional modern Indie DJ and he has been building up a great community on the Twitch platform, were he does a week day show called Lunchtime Lunchtunes, and sporadic evening show which largely involve him playing bangers and dancing up a storm in his Melbourne home. These sessions have been a life saver for people all over, to break the isolation of COVID, lockdowns, social distancing and restrictions.
You can find his Twitch channel at twitch.tv/djandrewmcclelland.

“I think the thing about the G&S stuff is it is of such a quality that you can’t forget about it. In a century people will still be listening to The Beatles – they are that good. And G&S is out of copyright so that helps. I couldn’t do it to Hamilton or Wicked but both Gilbert and Sullivan have been dead for a really long time!!”

Andrew McClelland (with Martine Wengrow) performs The Very Model Of A Modern Major Musical at Rhino Room – Upstairs at Rhino Room from 6pm on Tue 15 Mar until Fri 18 Mar.