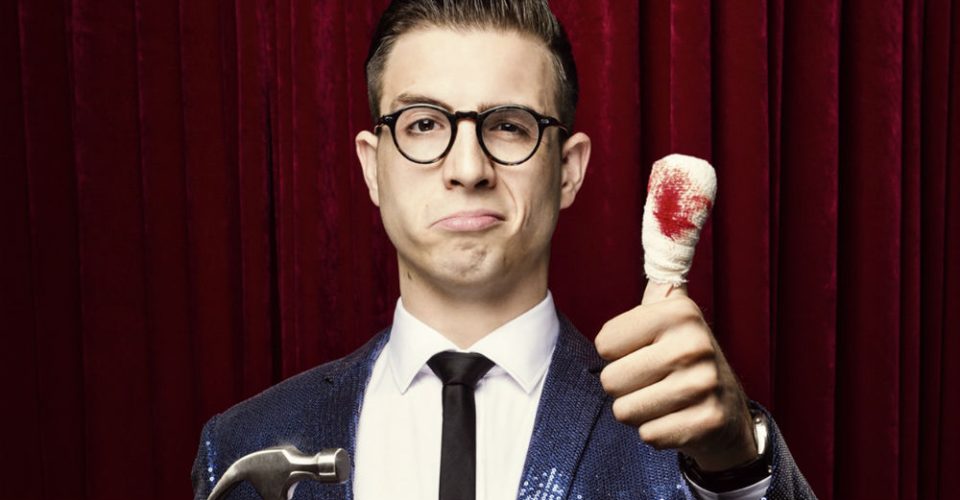 In a musical celebration of all the insane, hilarious and brutal things we do, and do to ourselves, when we are in love – or falling out of it with a thud, Nailed It! takes an entertaining look at the joys, the pain and the loneliness of love.

“This is my first time to the Cabaret Festival, but I’m no stranger to the Adelaide Fringe,” Andrew begins. “I love Adelaide, especially during festival times… which seems to be all the time! You are the festival state though, yes? My first experience of the cabaret festival was while I was still studying Musical Theatre at the VCA – my cousin Max was conveniently getting married at the same time Bernadette Peters was performing. What an excellent excuse to come and watch her! It was a pretty transformative night at the theatre – the way she used songs to show more of herself – the craft with which she approached the work… Max’s wedding was good too, of course.”

Tell us about Nailed It! and how you came up with the concept of this show. What can audiences expect to see during your Artspace performance?

“The show sort of organically arrived at what it was the more Loclan and I wrote. Roald Dahl used to tell stories about writing down an idea in the dust on the dashboard of his car, and Nailed It! was a bit like that… Except we have this handy function called iPhone notes now, and I don’t own a car. Whenever an idea came to me, I’d hastily jot it down and hope I knew what ‘Sandwich’ or ‘Progress Street’ or ‘Birds aren’t singing sweetly they’re yelling come have sex with me my chest is big and red’ mean when I read it again later!

“As to what they can expect,” he says, “I got my elevator pitch down to something quite tight in Edinburgh last year. I tell audiences that it’s a heartfelt meaningful exploration of love, relationships, Hogwarts, incest and plant genitalia… You know… Just the usual stuff.”

Relationships, Hogwarts, incest and plant genitalia is a very ‘interesting’ combination for a show. How do you fit them all in?

“Hahaha! So when we analysed them, the thread that ran through all of these songs was relationships – whether you’re falling in love, falling out of love, or just realising your innate solitude,” Andrew says. “If I’m honest, they’re about my relationships and the way I feel about sharing my life with someone and sharing in someone else’s life; all the ups and downs of it. Now would probably a good time to point out that not all of the songs are strictly autobiographical, for example the incest song is about Loclan. I kid. But even the most ridiculous stuff has some seed in truth!”

Tell us about some of the songs you and Loclan have written for the show: Funny? Heartbreaking? Tears of laughter? Poignant and relatable?

“All of that I hope! With any luck, all of them in the same song!” he says. “The plan is to go from groans of disgust all the way to everyone saying ‘awwwww…’ at different points in the show. I think that’s something my improv. comedy training has taught me. Even if it’s outrageous, it only really works if there’s a kernel of truth at the heart – and some of these songs have much more than just a kernel – I’ve put a lot of myself into the lyrics, and at heart I’m a real romantic. I hope people leave with some hope, feeling like they’re a bit less alone in the world than before.

“Nailed It! is different and special to me, because it’s the first time Loclan and I have written all of the music. It’s also one of the best things I’ve done – certainly the writing is something I’m really proud of.” 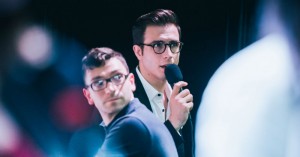 How much of this show is confessional? How much material have you written around friends’ lives, and are they aware of that? J

“It’s ALL confessional in some way or another. But don’t worry,” Andrew says, “it’s not just another white guy whining about his middle class life, but more like a celebration of how we’re all more the same than we realise… When it comes to the big stuff I let the songs do the talking.

“My friends actually contributed to one of the songs in this show quite directly via a Facebook post,” he explains. “I asked what the stupid things are that people have done in the wake of a breakup and got so many answers – most of them are in the song somewhere. I couldn’t believe how honest people were, especially given how public my Facebook is… and the subsequent world tour!”

This will be the Adelaide Premiere of Nailed It! Where else have you performed it and what have audience reactions been to the show? Have you had anyone tell you that you were confessing ‘their’ life?

“Oh wow. The marvellous thing I’ve noticed is that we seem to have a show on our hands that translates wherever we are. It started its life in Melbourne – that’s my home turf – so when we took it other places we worried that it might not be quite as relevant to non-vegan, non-hipster, non… wankers… but something about the show seems to genuinely connect with people – from drunk and rowdy crowds yelling in a Scottish bar, to drunk and rowdy crowds yelling in a New York piano bar…!

“There have been a lot of special moments,” Andrew says. “One of our London gigs happened right after I went through a break up, so everything was very raw. That audience and I shared a lot that night; it was very magical.

“Something that I loved was doing the show in Wagga Wagga and Ballarat. One very blokey mate of my dad’s relaxed visibly when he figured out the man in the sequinned blue jacket on stage was straight… And this same bloke came up to me and said ‘That bit you said about eating a whole jar of Nutella after a breakup… Me too, mate. Me too.’ That’s what does it I think. There’s a lot of focus on what makes us different in this world, but I’d rather look at what makes us the same – and I think that comes out in the show.

“Another really touching moment,” Andrew recalls, “was when a young German guy came up to me after a night in Edinburgh… He said ‘Your song about taking it one step at a time – it’s just what I needed to hear. I’ve been having a really tough time lately and that’s really helped.’ Moments like that are special.”

Are there any artists you are hoping to catch at this year’s Festival?

“I think the festival program is outstanding; Ali and Eddie have done a pretty excellent job,” Andrew says. “I’ll be off out of Adelaide before I get the chance to see much, but Margaret Thatcher: Queen of Soho did the rounds at Edinburgh when I was there last year and the buzz it got was amazing. I’m a huge Megan Hilty fan too (#teamivy), and I can really recommend Sammy J – he’s super funny and doubly sweet.”