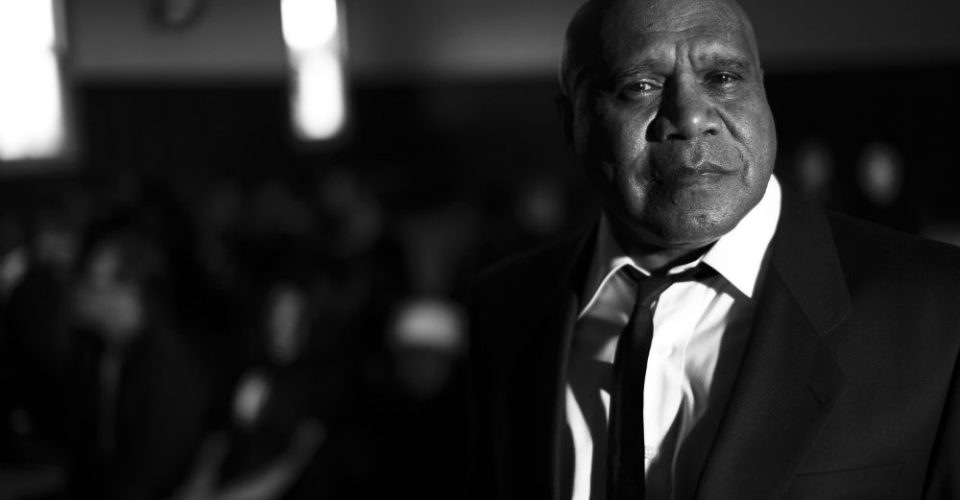 His name is synonymous with Australian music, his best known song is the much revered multi-Aria, and International Human Rights Achievement Award winning inductee into the Australian Film and Sound Archive They Took The Children Away and he has forged a career across three decades working with some of the world’s most highly celebrated musicians of the day. He is of course, Archie Roach.

The Adelaide Cabaret Festival is fast approaching, and will once again play host to a man who is a musician, storyteller and voice of Indigenous people everywhere. Roach is quick to point out, however, that his songs are “not just about Indigenous stories – they [contain] universal themes.” This explains why his songs resonate across mainstream and indigenous audiences alike.

His gift as a storyteller is such that rather than alienating mainstream audiences with messages of guilt, Roach’s music encourages awareness and understanding. And he remains justifiably proud of the result.

“They Took The Children Away still means as much to me today as it did when I first wrote it,” Roach says. “It’s a healing song.”

With that song’s release, a career in music was launched and Roach has never looked back – from his first album, Charcoal Lane to the release of Into the Bloodstream in 2012, Roach has continued to produce songs that are uniquely Australian and consistently redefines himself and the way he sees the world. Into the Bloodstream, specifically, was very different to anything Roach had done before and most certainly the result of a period of intense sadness in his life to that point.

After losing his beloved wife, Ruby Hunter unexpectedly in 2009, Roach himself was beset with a number of serious health problems that threatened to overcome him. It was with the greatest determination that Roach persisted and pushed his way through those dark times.

When describing how he navigated his way through those years, Roach is quite matter-of-fact about it, saying he was helped along “with encouragement from dear friends and family and by still creating music”. And create he did – Into The Bloodstream has been billed as ‘joyous and uplifting’, a suite of music with gospel tones never heard in his music before – and marked a whole new chapter and direction for the musician.

Once he arrives back in Adelaide, Roach is looking forward to catching up with family and friends (having spent time as a youth and also meeting his wife here) and being involved in the Cabaret Festival once again; the decision to return for another was easy.

“We had a great time last time we played,” he declares, “so we are all looking forward to being a part of it again.”

Creation is described as a ‘homemade gift from the healing hands of our nation’s most cherished storyteller and song man’. It promises to deliver a body of work that audiences have loved over the years but also includes a number of songs never released before. This seems to gel well with the title – as Roach explains.

“Creation refers to the music and the show is all about bringing to life old songs from the first four albums that never made it onto those records.”

Roach will share the stage with a ten-piece musical ensemble which he says will embellish the songs and breathe new life into them. He’ll also be joined by the amazing vocal talents Nancy Bates, Ellie Lovegrove and Minday Kwanten. Add Roach’s own soulful, folky voice – once described by 60 Minutes’ reporter Jeff McMullen as ‘with a tremor like broken moonlight’, and it’s easy to see why Creation has been so well received by audiences and critics alike and why he is once again a favourite destination of this year’s Adelaide Cabaret Festival.