ASTERIX AND THE CHARIOT RACE: Our Gaul Turns 37… And A Bit – Book Review 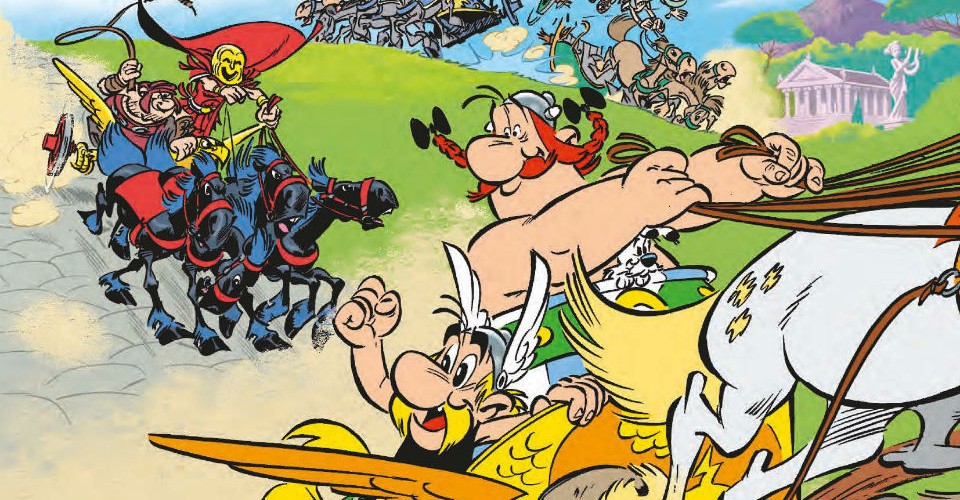 René Goscinny and Albert(o) Uderzo’s names still appear at the top of each new Asterix adventure, even though Goscinny died in 1977, Uderzo wrote the stories solo until 2009 and then retired (he resurfaced early in 2016 to add his and Asterix’s voice to the ‘Je Suis Charlie’ movement though), and now they’re written by Jean-Yves Ferri, illustrated by Didier Conrad and currently translated into English by Adriana Hunter (the latest in a long line, and she does a good job of dealing with some surely serious colloquialisms). And while the character and the tales are still extremely popular across all age groups, there’s no doubt that this 37th instalment (since 1959) features a little weariness and repetition, plus a sense that we’ve seen variations on it all done before, and rather livelier too. Or have we all just finally grown up?

Hopeless Roman Senator Lactus Bifidus opens this one as he insists that all the roads are in fine shape (they’re not) and impulsively arranges a chariot race across Europe to prove it, all of which happens at the same time that Obelix becomes obsessed with the idea that he’s going to be a master auriga (charioteer) because a surely-sham soothsayer told him so (see also Asterix And The Soothsayer). After much Obelix 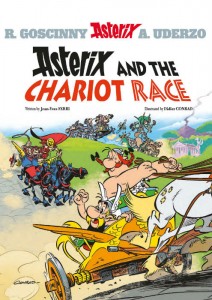 pouting (and a moment where he pointedly complains that Asterix always gets to be the hero, and as well he might), Asterix, Obelix and Dogmatix set out to join the ‘Great Transitalic Race’, which feels a little like the cross-country dash in Asterix And The Banquet and also involve a masked Roman champion named Coronavirus, Bretons named Madmax and Ecotax, Lusitanians named Bitovamess and Undaduress, Goths who speak in a different typeface (like in Asterix And The Goths) and a pair of scantily-clad princesses from Kush (in Egypt). Their names? Nefersaynefer and Kweenlatifer, and they speak in humourous hieroglyphics (just like in Asterix And Cleopatra, Asterix The Legionary and other outings) and drive the ageless protagonists and other supporting male characters crazy with subtle desire, although it’s all a bit coy, as these are books intended for children and the whole topic of sex has been an issue since the days of Asterix The Legionary (where Obelix falls for hot blonde Panacea for the first time), the later Asterix And Son (where Obelix reveals that he doesn’t know where babies come from) and so forth.

When they get going, everything feels pretty familiar, with the Romans naturally as villains (spoilers: Coronavirus is revealed as a cheat, just like the athletes in the classic Asterix At The Olympic Games), themes about underground resistance movements that seem to hark back to the Second World War, a subplot that apparently goes nowhere (other charioteers want to steal Asterix’s customary gourd of magic potion but somehow don’t), a weird gag about the Mona Lisa (many, many centuries too early) and what sounds like a joke about climate change. Asterix? Political? Mais non!

With a plot that seems to fizzle out, offering a frustrating resolution that smacks of child-coddling PC, this still has enough charm to warrant a Christmas read, although the witty punch of a Mansions Of The Gods or Asterix And The Great Crossing or the darker Asterix And The Cauldron and Asterix And Caesar’s Gift are sadly missing. And speaking of Caesar (who’s lived longer in these books than in real life), he of course turns up here and looks unsurprised when he discovers that the Gauls are causing problems, and when he finally runs into them there’s no mistaking the look on his face: “Oh great! You again!!!”