Get Your Rock Blues On And Support The “Beat This” Cancer Council of SA Fundraiser With Chris Finnen And Band, King Pins, RockFellas, Rocks In Yer Head And Vanishing Act: Sat Feb 7 At The Arts Centre, Port Noarlunga. 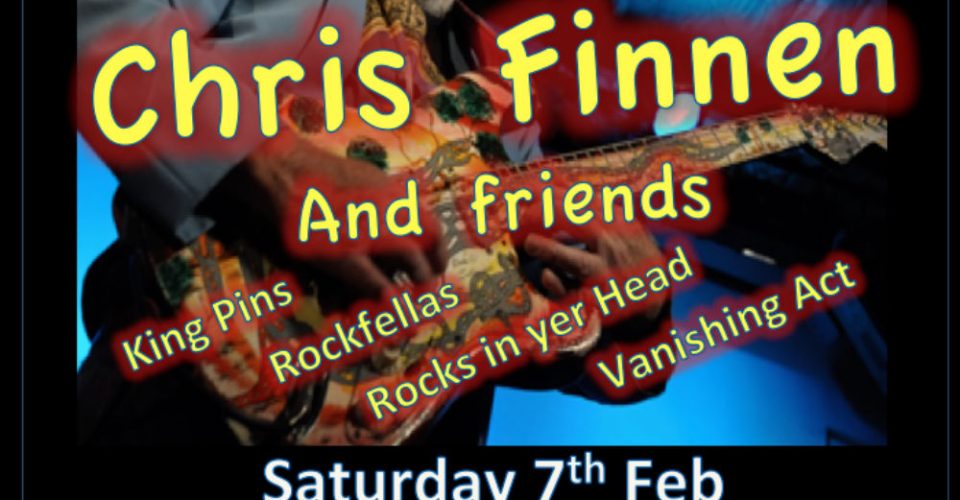 “Beat This” is a Rock And Blues Benefit Concert starring Adelaide’s own legendary blues guitarist Chris Finnen, who has called in a bunch of friends to help raise much need funds for Cancer Council of SA: King Pins, RockFellas, Rocks In Yer Head and Vanishing Act.

Supported by The City Of Onkaparinga, “Beat This” is the inspiration of Rob Wardle, in response to a personal tragedy that occurred a year ago. Rob explains.

“My father Trevor had, like so many others, succumbed to cancer. As my parents, Trevor and Josie, lived in the UK and had never seen me play a guitar or in a band, I had arranged a bit of a muso’s party to entertain them during their planned visit to Australia in Feb 2014. Unfortunately, Dad didn’t make it and we unexpectedly attended his funeral in the UK.

“My fathers passing set me thinking about all the pain and suffering experienced by so many families, so I decided to put together a fundraising event in his honour, and donate all proceeds to the Cancer Council of SA, to help with all the great work they do.” 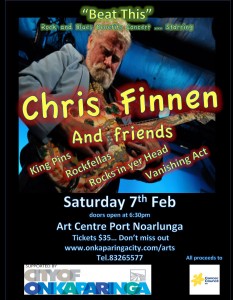 Rob began by approaching some of his good friends within the Adelaide music scene, and received an unbelievably positive response.

“We’ve received donations from many local businesses for raffle prizes including a Telecaster Guitar and amplifier from our good friends, Nick and his team, at Southern Music. Local bands The King Pins, RockFellas, Vanishing Act, my own band Rocks In Yer Head are all donating their time to the cause which will be headlined by the amazing Chris Finnen and his band. Together we will provide a night of rock and blues to delight the audience.

“Chris Finnen is not only a blues aficionado, but he’s also a musical legend whose commitment to music is recognised around the world. In fact, he was recently entered in to the Blues Hall Of Fame. Chris responded to my request for help, without hesitation, true to his giving nature. He recognised the passion involved in this event and agreed to host the evening; donating his time for the cause.

“We are now working hard to promote the event and look to the Australian patronage to help support the cause by attending a night to remember. There is an amazing raffle for people to enter, and we are also being supported by Ali Kat Guitars who will be running a Bottle Alley Giveaway. Not to mention the big give away for the night, a Telecaster Guitar and amplifier!”

Beat This Rock And Blues Benefit Concert featuring Chris Finnen and his Band, The King Pins, RockFellas, Vanishing Act and Rocks In Yer Head is being held at The Arts Centre, Port Noarlunga, from 6.30pm on Sat Feb 7.

Bookings on 8326 5577 orwww.onkaparingacity.com/arts. Tickets will also be available at the door.

Tickets are $35 each, with ALL proceeds going to the Cancer Council of SA.

Mention The Clothesline Magazine or BSide Magazine and pay only $25 when purchasing your tickets at the door.

Catherine began her Arts Journalism career in 2001. Although originally studying Acupuncture, writing seemed to fall into her lap and stayed there. After 13 years of writing with Rip It Up, she is the Founder and Editor of The Clothesline and continues to nurture her love of writing and interviewing. Catherine is also the Arts Editor of BSide Magazine - Adelaide's newest free street press. In her other life, Catherine is a mother, award-winning singer-songwriter and carer, an advocate, occasional fundraiser and absolute supporter of Down Syndrome SA and Foundation 21. ..."It's a life... it may as well be mine!" : )
Copyright 2018 The Clothesline {site Massive Empire}
Back to top