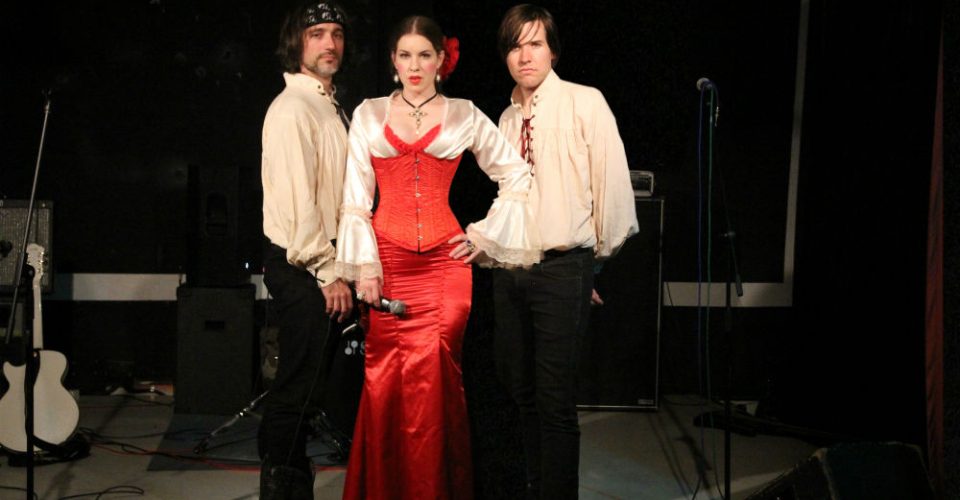 The Bertie Page Clinic presents a rock opera focusing on the evolution of the world most notorious undergarment – the corset. On stage there will be piano, violin, cello, guitar, bass, drums and nose flute (that’s right, nose flute), played by some of the most respected names in Brisbane contemporary music; music and a performance that was considered too loud and too risqué for audiences at the 2011 Edinburgh Fringe and got them banned from their venue.

The Clothesline speaks with burlesque star Bertie Page about bringing Serpentine to the Adelaide Feast Festival and begins by discussing the rock opera genre.

“The blending of rock and opera is a long established tradition with many works to draw inspiration from. I am a big fan of Jim Steinman, the composer behind the rock opera masterpiece Bat Out Of Hell which shot Meatloaf to stardom in the late ‘70s. Rock brings a huge sound driven by grand emotions, so blending it with operatic vocals and themes can be achieved with great ease. Take your power chord on guitar, add dramatic piano and vocals that journey through a wide register and you will find your rock opera.”

What songs can we expect?

“Anticipate original songs that draw on various styles. We will also be delivering our own special take on Smokey Robinson’s You Really Got A Hold On Me and the timeless Brindisi from the sumptuous swooning opera La Traviata.” 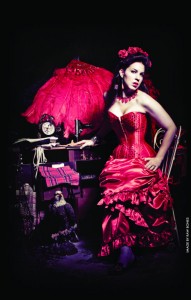 What do you find fascinating about the corset?

“The corset is far more than just a garment; it is a glamorous and dangerous spider at the centre of an enormous web of social and cultural events. It was first developed as a means of support and the first European corsets were made of leather and coarse fabric stitched with reeds making it an excellent way of maintaining body heat. It moved from outerwear to undergarment and as technology advanced it gained an increased ability to modify the size and shape of the torso.”

What part of the journey of the corset within women’s fashion do audiences find most appealing?
“At the height of its reign in the Victorian era the corset was at once an agonising harness and a means of individual expression. It was one of the few socially sanctioned forms of body modification. Increasing availability meant that a housemaid could achieve the same figure and posture as a duchess, in a strange way it became a class equaliser. There are many negative stories about corsetry; some true, many are myths which were established by uninformed minds during the 19th century. I find great pleasure in exploring the ways in which corsetry has afforded women social agency and control over their own bodies.”

Bertie Page sources her costumers from the Sydney based Gallery Serpentine, a fashion house, which provided the inspiration for the show.

“Their lush designs bring a freshness and romance to Victoriana. Each corset in the show has been custom made for me with lines inspired by corsets from Marie Antoinette’s reign to the hourglass drama of the close of the 19th century.”

You have travelled around Australia and Europe for the past 3 years. What has been your favourite place to perform?

“I love the region of Brittany in France, there is a huge rock and roll community there. The friendships I have forged there have inspired me to study French. The people of this region do not really consider themselves “French” they have their own unique culture with ancient roots with the Celts that led to their own language and culture which has a decidedly Celtic flavour.”

This unique group performed last in Adelaide at the 2011 Feast Festival in the Gothic cabaret Dark Comforts. Some of the songs that were premiered then evolved into becoming part of Serpentine. They are looking forward to returning, but disappointed they will miss one of their favourite performers.

“Feast is such a welcoming and groovy festival experience. I am a huge Carlotta fan but, sadly, she is performing the week before we arrive. Lucky for me that she agreed to perform in Brisbane at my request! Booking Carlotta was one of the proudest moments of my cabaret career.”

What is next for the Bertie Page Clinic?

“I long to return to Japan, we played as a duo there in 2011 and earlier this year. I am itching for the food, the silk and to see the beautiful friends that I have made there. The girls who work in Japan’s cabaret and burlesque scene are nothing short of incredible. They break the moulds of gender and social hierarchy, their courage and talent is astounding.”