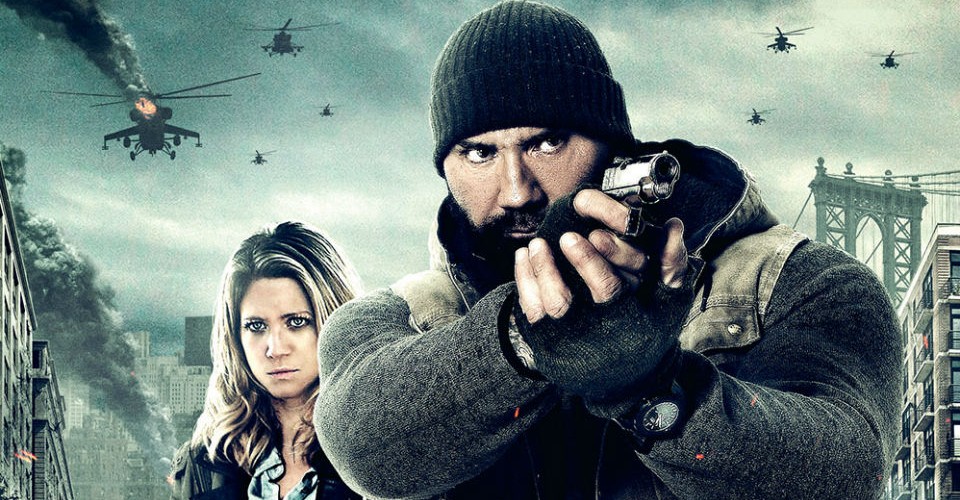 Co-directors Cary Murnion and Jonathan Milott’s début feature Cooties was a troubled but enjoyable school-set zombie-esque horror comedy starring several players you’d have thought would never be caught dead in such material, and this follow-up is more serious and uncomfortably satirical, and offers another cast member trying something different. Yes, former wrestler and man-mountain from the Guardians Of The 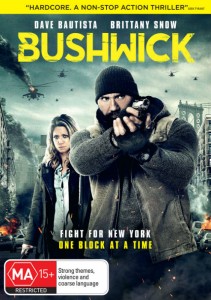 Galaxy films Dave Bautista is the big name here, and once again he’s trying to show his range (he can also be spotted doing the same thing in the opening scene of Blade Runner 2049). And lo and behold – he can act!

This intense action drama (which at first seems to owe something to the two versions of Red Dawn) opens with Lucy (Brittany Snow) bringing her gormless new boyfriend to meet her grandmother in Brooklyn and, wouldn’t you know it, unfortunately choosing the very day that the city is invaded, bodies line the streets and, as usual, the expected urban militias, freaks and sleazebags use the chaos to feed their obsessions. Lucy is about to be brutalised when she’s saved by Stupe (Dave), who then agrees to accompany her through the dangerous five blocks of Bushwick so that she can get to granny, who’s revealed as hardly surprised that New York is getting it in the neck yet again.

However, what distinguishes this small yet grimly compelling pic from the Red Dawns is its key twist, a turnaround that could be quite a surprise if you don’t look at almost every other review online, the IMDB and probably the back of this DVD.

With Bautista and Snow underplaying nicely (they couldn’t really be heard if they hammed it up anyway) and a sense of a city genuinely on the brink of doom (yet on a budget), Murnion and Milott’s movie offers a vision of America tearing itself apart instead of being made great again.