Barry Humphries Is Proud To Present The Adelaide Cabaret Festival Program For 2015… And It’s A Fabulous One Because This Year “There ARE NO Rules!” 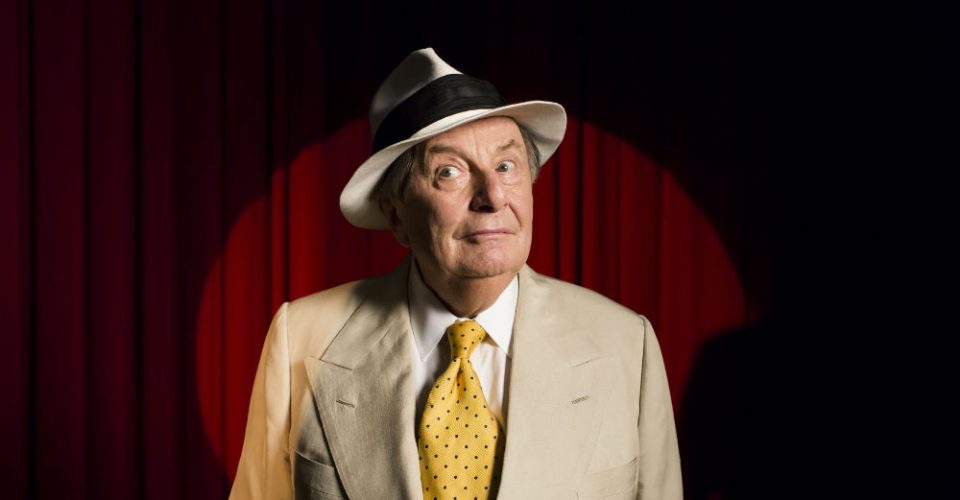 BARRY HUMPHRIES PUTS THE ‘F’ BACK INTO FESTIVAL WITH HIS 2015 ADELAIDE CABARET FESTIVAL PROGRAM – THERE ARE NO RULES!

Other F words within cooee of this year’s Adelaide Cabaret Festival are fabulous, funny, frisky, fantastic and, of course, Fedora!

Sensuous sirens, charismatic crooners, scandalous storytellers and jovial jesters who are hilarious, naughty, sexy, addictive, outrageous and dangerous are featured throughout the 14 days and nights this June.

In his debut as artistic director, Australian comedy legend Barry Humphries promises “beauty, wit and astonishment” in an outstanding program of music, story-telling, comedy and incredible talent. There may even be a bit of love from his alter-ego Dame Edna Everage!

Proudly presented and produced by the Adelaide Festival Centre, the dynamic Adelaide Cabaret Festival 2015 program features more than 350 artists in 152 performances over 14 days and nights:

Douglas Gautier, Adelaide Festival Centre CEO & Artistic Director says, “Adelaide Cabaret Festival goes into overdrive under the direction of the great Barry Humphries. Our loyal audiences are in for a feast, with a wide-ranging program that includes not only international stars of Cabaret, but many home grown performers – including some that began their careers with the Adelaide Cabaret Festival many years ago”

Adelaide Cabaret Festival Artistic Director, Barry Humphries, says, “I’m thrilled to be able to present to you the 2015 Adelaide Cabaret Festival program, which I do hope will excite and titillate your senses. I’m delighted to be presenting some of the best local, national and international artists on the Cabaret scene – some are very good friends of mine – Sir Les Patterson, whom I manage, will be making an appearance, while gigastar Dame Edna will make the trip over from Moonee Ponds.
“Other artists I look forward to meeting for the first time, having admired them from afar. I look forward to seeing my Adelaide friends in June as we spend the month devouring everything Cabaret.”

Opening this year’s Adelaide Cabaret Festival is the perennially popular Variety Gala Performance on Fri 5 Jun, where the program will include a selection of highlight performances from international and local Cabaret Festival artists. Hosted by Meow Meow and backed by the Adelaide Art Orchestra, this curation of spectacular performances will open the Festival with a bang.

For one night only, we welcome back one of Australia’s biggest stars and a truly global comedian, Adam Hills, to the Festival Theatre stage with his hilarious new show, Clown Heart.

Bernadette Robinson is reunited with Simon Phillips to deliver a virtuoso performance in the Adelaide premiere of Pennsylvania Avenue, a wonderful celebration of iconic singers who have been deeply connected with the White House – as performers, friend or something more intimate.

The Glenn Miller Orchestra will come together with the Moonlight Serenade Singers and the Broadway Swing Dancers to honour the ANZAC centenary with an unforgettable evening of nostalgia. This remarkable show includes music and songs from the Great War, as well as classic Glenn Miller hits, including Chattanooga Choo Choo and In The Mood.

Returning Adelaide Cabaret Festival favourites include American Cabaret star Storm Large, who will grace the Adelaide stage again with the Australian premiere of Taken By Storm – a seductively brilliant collection of tortured and titillating love songs.

Eddie Perfect presents Songs From The Middle, a performance of heart-breaking and hilarious songs about coming of age, binge drinking, failed romance and mind-numbing normalcy. It’s a contemporary song-cycle set in the middle of Port Phillip Bay that is equal parts nostalgia, peace-making and personal exorcism.

Trevor Ashley will return with his divinely decadent production, I’m Every Woman, as he channels the world’s legendary divas and their cavalcade of smash hit songs.

The Tap Pack will present their spectacularly energetic stage performance when they make their Adelaide premiere, showcasing some of Australia’s finest slick suited tap performers complete with swing favourites.

Also returning to what may soon become his second home, Michael Falzon along with fellow Swing On This crooner Luke Kennedy performs Painted From Memory as they revisit the 1990s when Burt Bacharach teamed up with Elvis Costello in what was the beginning of many beautiful songs penned together. This song-cycle of reimagined tunes are brought to life along with these two incredible voices and a 9-piece orchestra.

At the personal request of Adelaide Cabaret Festival Artistic Director, Barry Humphries, the ultimate Weimar doyenne, Meow Meow, will present an on-the-edge, intimate cabaret performance and world premiere that features songs from the sirens, transgressors and tragi-grotesques of Weimar Germany.

My Vagabond Boat features the music of displaced composers Friedrich Hollaender, Kurt Weill and Cyndi Lauper to present an evening of songs, sketches and dazzling debauchery.

Direct from New York, the Karrin Allyson Quartet are set to win hearts with their astounding versatility – with a spirited musical repertoire that includes bebop, Brazilian, blues and ballads.

Alan Brough and Casey Bennetto are back as The Narelles, presenting the hilarious musical hits and misses of a band that never was.

Front man for legendary outfit The Cruel Sea and the hard-edge pub rock of The Beasts of Bourbon, Tex Perkins is back with fellow Dark Horses – Charlie Owen, Joel Silbersher, Murray Paterson, Stephen Hadley and Gus Agars, to perform some of the finest moody grooves your ears will hear in 2015.

Adelaide’s own West End sensation, Daniel Koek, appears in Bringing Him Home with His West End Story, a series of personal songs and stories from a decade in musical theatre on the world stage. Daniel will perform highlights from his leading roles including West Side Story, Chess, South Pacific and his second studio album HiGH.

Adelaide Festival Centre’s youth arts membership program GreenRoom have a range of special offers to Adelaide Cabaret Festival for 16 to 30 year olds, including heavily discounted tickets to a variety of shows. For more information on the GreenRoom program visit www.adelaidefestivalcentre.com.au/greenroom

• Tickets for you and five friends to the Variety Gala Performance

• Twin share accommodation at InterContinental Adelaide over the Festival opening weekend (two nights) with a complimentary bottle of Grant Burge sparkling upon check-in.

Full program and tickets are on sale to subscribers from Mon 30 Mar and the general public from Wed 1 Apr through BASS 131 246 (select 2 at the prompt for Adelaide Cabaret Festival bookings) or online www.adelaidecabaretfestival.com.au

The Adelaide Cabaret Festival 2015 performs at the Adelaide Festival Centre from Fri 5Jun until Sat 20 Jun.