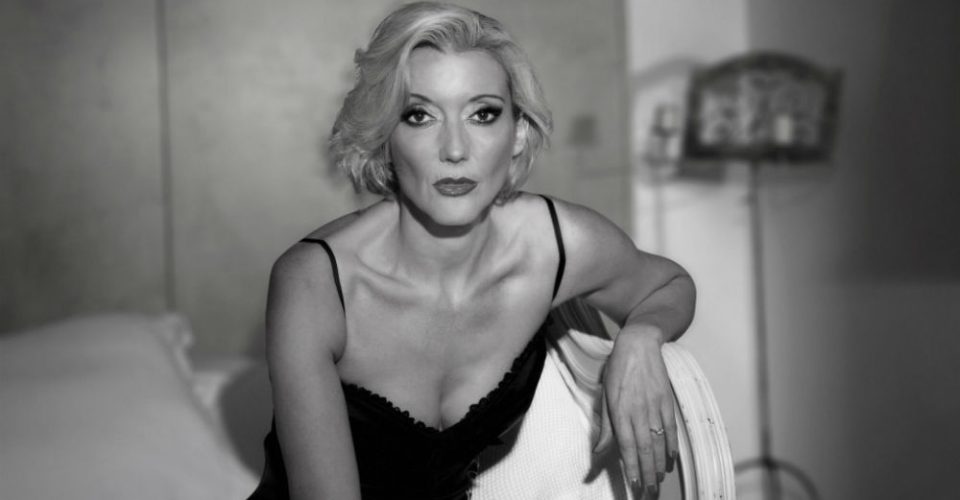 French chanteuse Caroline Nin is a seductress of the most sophisticated kind. Since 2002 she has been mesmerising Adelaide Cabaret Festival audiences with her songs and stories of sultry singers and iconic Parisian cabaret venues. This intriguing femme fatale has spent much of her life living, breathing and performing in and around the Champs-Élysées, in the same night clubs that headlined elite artists like Edith Piaf, Liza Minnelli, Noel Coward and Marlene Dietrich.

Caroline Nin is in Paris as we speak over the phone about her show Songs And Stories Of The Paris Lido.

“It’s a glorious day,” she begins. “It’s been raining quite a lot lately but today has come with a beautiful sunshine.”

Caroline is very happy to be performing at the Adelaide Cabaret Festival for her fourth time.

“I’m a local really,” she fondly declares. “Previously we did stories based on the lives and music of Edith Piaf and Marlene Dietrich, and now we have a brand new show about The Paris Lido; the famous cabaret on the Champs-Élysées, right next to the Arc de Triomphe. It’s a huge venue that holds 1200 seats at fine dining tables where cabaret shows are presented every night of the year.

Thanks to the movie by Baz Luhrmann, many people are aware of The Moulin Rouge. Even with the obvious artistic privileges he has taken his representation, how do these two venues compare?

“The Moulin Rouge is really nothing like the movie although it does concentrate more on the traditional French culture and heritage of music and dance, like the Can-Can,” Caroline suggests. “The Lido, however, is very much open to the art world, with more than 40 dancers with feathers and glitter, and the singers with their band who perform before the shows.”

Tell us about Songs And Stories Of The Paris Lido.

“I have a long history there, having performed two shows a night, six nights a week between 2005 and 2008, then again in 2012,” Caroline explains. “I came up with the idea of writing a show about the intimate world of The Lido; life backstage inside the dressing rooms, who is doing what, stories the principal performers, and about me – the singer.

“One of the principals that I worked with at The Lido is Shay Stafford who is also performing that the Cabaret Festival this year in Memoirs Of A Showgirl. Her show is about the real Lido and what she does there as a performer, whereas I bring in my stories of a more smoky world. I wanted to look at life behind the scenes so I created a character called Lola Lola who is telling her life story from her time at The Lido; love, passion, longing. It’s an intimate tribute to the most famous cabaret in the world.

“Shay and I will be doing the Opening Night Variety Gala Performance together, which is very exciting for me,” she adds. “It will be the first time in my life to have the girls in feathers dancing while I’m singing. Usually I sing before them so this is fantastic; I’m really pleased!”

Backstage, there would be excitement and eagerness, the divas, the meltdowns – all of which can be both sad and funny. Are all of these things in the show?

“It’s definitely comical. I introduce who is who at The Lido, the characters, their egos, the night out after the show which includes clubbing and drinking too much champagne. My character is not pathetic, but she is a bit sad really,” Caroline laughs. “Her life revolves around The Lido and she has no life outside, so that’s what she’s trying to find which is impossible because she spends eight hours of her night there. By the time you get there and perform, the whole night is gone.”

It’s far from a normal life, isn’t it? You become friends with the people in the show, and you lose those friendships when they leave.

“It’s exactly that,” she agrees. “It’s a community where everyone lives together until they are gone and you never hear from them again. And then it starts again the next day.”

How long did it take you to create Lola Lola?

“I guess about a year now, even though she is constantly changing. I started wondering what else I could do with this life I lead; I need to make things interesting when I’m performing twice a day, six times a week for a year,” Caroline laughs. “I created Lola to be the storyteller for the show.”

Doing 12 shows a week, how do you keep it special for yourself?

“I try to do other musical things,” she says. “It’s a great job and I’m doing what I love but I try to nourish my inner artist by writing songs, rehearsing with musicians on other projects, and I try to learn new songs all the time. That also means I can take new songs to The Lido as well.”

Do you ever learn pop songs as something different to the smoky jazz you mainly perform?

“It’s a really good question because smoky jazz is what I do when I’m with my band, but I also sing pop tunes at The Lido to make people get up from their dinner tables and move onto the dance floor,” Caroline explains. “It’s a repertoire that gradually moves from the French Chanson at the beginning of the evening to pop and disco. I’ve transformed a very famous song – which I will not name – in a way that people will not recognise it immediately. My aim is to get everyone to stand up and dance at my show!”

Being a songwriter, do you write solely by yourself or with others?

“I love writing lyrics but I collaborate on the music with others,” she replies. “I hum melodies and ideas and then I get my fiddle composer friends to write the charts and chords for me. There is one of my originals in this show and the rest will be covers from artists such as Jacque Brel, Michel Legrand, Serge Gainsbourg and Sarah Vaughan.”

Do you have some favourite songs that you’ll be performing in this show?

“I don’t want to tell too much,” Caroline says, “but I’ve combined songs from artists who have performed there, like Marlene Dietrich and Kurt Weill. I perform Grace Jones’ Libertango, taking everyone on a stroll of the streets of Paris by night, and Big Spender which is one that I often sang at The Lido.”

Not ashamed to share her age, Caroline Nin is absolutely gorgeous at age 50.

“Photography does wonders for me,” she openly jests, “but I also keep myself pretty neat. Being in the entertainment world, we have to look after ourselves because our jobs are very physical. We do as much as we can to make things look easy on stage, when it’s usually quite the opposite [chuckles].”

Caroline mentions that she is happy to be spending five weeks in Australia. Following her time here in Adelaide, she will be performing at the Brisbane Powerhouse and on to Riverside Parramatta. We ask if there are any plans to return for future Cabaret Festivals.

“Next year will be Edith Piaf’s Centenary; I’ve not bought Piaf to Australia for three years now, so I’m looking to bring something as part of the big celebration that will be going on all around the world. I’m also writing a show called The American Songbook which is premiering in Melbourne this June,” Caroline reveals. “I think that show will be very interesting because it will allow me to do something different to cabaret and show more of my vocal ability, which I’m quite keen on doing.

“There is another huge project in the works,” she adds. “It’s based on a particular film, with a big orchestra which will probably be ready for 2016… but it’s still in talks.”

“Yes. I would love the audience to use their imagination when they come to my show,” she concludes, “I want them to follow me into the backstage life of The Lido – the heartbreak and the despair – because that is the story that I love to tell.”

Caroline Nin performs Songs And Stories Of The Paris Lido at Space Theatre at various times from Fri Jun 6 until Sat Jun 7.