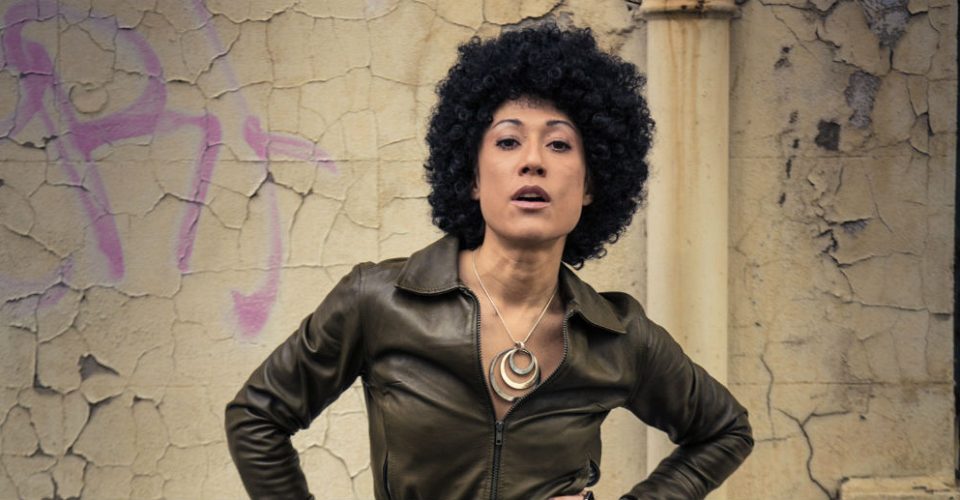 The pre-show has already begun when the audience filters in. There’s a self-absorbed guitarist sitting on stage practicing a few riffs. An Afro-headed cool guy is grooving around in the audience space and telling us how good the guitar player is. A hippy couple oblivious to anything but themselves are dancing to the side of the room, and a young woman in an overcoat is staggering around drunk near the front of the stage. All of this is being filmed and projected in black and white on the screen behind the stage. We are in another time. The only things missing are cigarettes and joints.

Cecilia Low hits the stage as Betty Davis in the shortest shorts you’ve ever seen, and prowls and growls at us about love, sex, and fame. Betty was briefly married to the great jazz icon, Miles Davis, and was friends with Jimi Hendrix. Her own fame was limited – due in part to the dripping sexuality she brought to her live shows and which saw her banned from radio airplay in much of America.

The songs were all funk and groove so anything resembling melody was scarce, but it was refreshing to hear raw and rhythmic music that wasn’t driven by pre-programmed electronica. It was just the product of human passion. The guitar player’s impersonation of Hendrix’ performance at Woodstock was pretty impressive too.

Various grabs of audio and video played between songs served as something of a poetic narration of context and characters, and allowed the audience to catch their breath before the next groove was launched. It also gave us glimpses of who Betty Davis was off stage, and how she could pick up bits of gossip in the ladies room in change of costume breaks to add fire to her performance.

While the centrepiece of They Say She’s Different is straightforward enough – a soul/funk band pumping out tunes with a very sexy female singer – there is a lot more to this show. The pre-show scene, the slides and images of characters present and past, the live filming and projection, and the occasional aside conversations from characters off stage all offered plenty to think about if you like to analyse these things. Or you could just opt to be dazzled by the gorgeous Cecilia Low and leave it at that!