Chris Marlton & Nick Schuller: Why Not?: Get Your Rhino Room Comedy On Before Dinner!~ Adelaide Fringe 2021 Interview 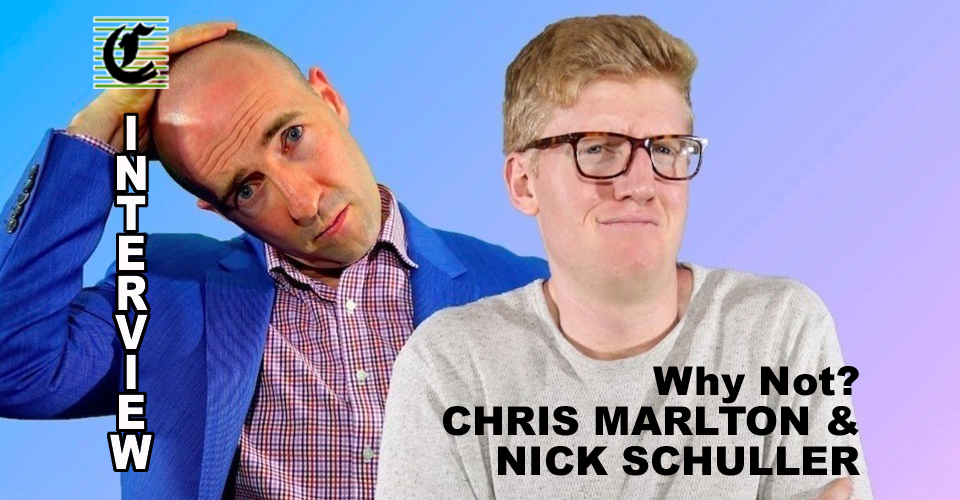 If you want to see something really funny at Adelaide Fringe without staying up very late or paying out lots of hard-earned dollars, then this might be the show for you! It’s FREE (ticketed) and it’s on before you’ve had a chance to decide what to have for dinner. Two comedians from Canberra (no, not those comedians!) who have been to the Fringe before and liked it so much they came back. But it’s a really short season so you’ll need to quickly find your way to the Rhino Room.

We chat with Nick Schuller about Why Not? and begin by asking him how long they have worked as a tag team.

“This is the first show we’ve done as a duo. We performed together for a few years as part of a three-man show but the band broke up and we’ve gone out on our own. This is our Lennon-McCartney moment.”

You recently moved to London just ahead of a global pandemic? Isn’t good timing supposed to be essential for good comedy?

“I did,” Nick says. “I moved to London two weeks before their lockdown started but while my off-stage timing needs work, on-stage I’ve got it down. The upside of moving across the world just to be locked down was that I had a lot of time to write jokes.”

Chris is described as having relentless energy. Is that a little hard to keep up with on stage?

“Absolutely! Chris’s act involves various different characters and he switches in and out of them constantly. Sometimes I think Chris even struggles to keep up with the characters himself.”

Both Nick and Chris have performed previously at Adelaide Fringe.

“We have. I’ve done a few gigs at Adelaide’s famed Rhino Room and we both brought shows to the Fringe last year. The atmosphere during Fringe is electric and the audiences are always great.”

How easy is it for young comedians to get started in Australia these days?

“There’s never been a better time to be in comedy,” he says. “There are so many ways to reach an audience now whether it’s a YouTube channel, a podcast or TikTok videos. So many great new stand-ups have launched their careers online and once you have an engaged audience they’ll come and see your shows in person. New comics can get spots at great gigs based on the size of their social media following.”

How would you describe your style of humour?

“Sarcastic and dry. If something annoys me I like to focus on the minute details of why it’s annoying and explore these. Last year The Advertiser said I had “an intellectual brand of millennial humour.” Make of that what you will.

What most makes you both laugh about each other?

“Chris is a lunatic – which I find hilarious,” Nick says. “He treats every conversation like a riff and immediately takes things to surreal extremes. I don’t mind a pun; I chuck some deliberately bad ones into my set to make fun of. I think Chris finds these funny at face value, not because I’m making fun of them, which is a little worrying.”

Are there any serious issues discussed in your show, or is it non-stop laughs?

What do you expect people will enjoy most about your show?

“The contrast between our styles, he says. “I do garden-variety comedy club-style stand-up but then Chris takes things to a very different place with his character work. The contrast makes the show unique. There’s nothing else like it at the Fringe!”

Is there any particular age this show will appeal to, or will it appeal to people of all ages?

“It’ll appeal to anyone and everyone. It’s not aimed at particular demographics (although the 5.45pm timeslot is ideal for the early-bird dinner special crowd). If you like to laugh, the show’s for you.”
Is there anything else you would like to tell us to encourage us to come along to see Chris Marlton & Nick Schuller: Why Not??

“It’s free! (sort of). Chris and I want to make the show as accessible as possible so tickets don’t cost anything. At the end of the show we collect donations and let the audience decide what the show was worth. It works for the audience because they don’t have to risk shelling out $25 for a show they might not like. And it works for us because we can bring the show to more people!”

Chris Marlton & Nick Schuller – Why Not? performs at Drama Llama at Rhino Room at 5.45pm from Tue 2 Mar until Wed 3 Mar.

Book at FringeTIX on 1300 621 255 and adelaidefringe.com.au. Click HERE to order your tickets.