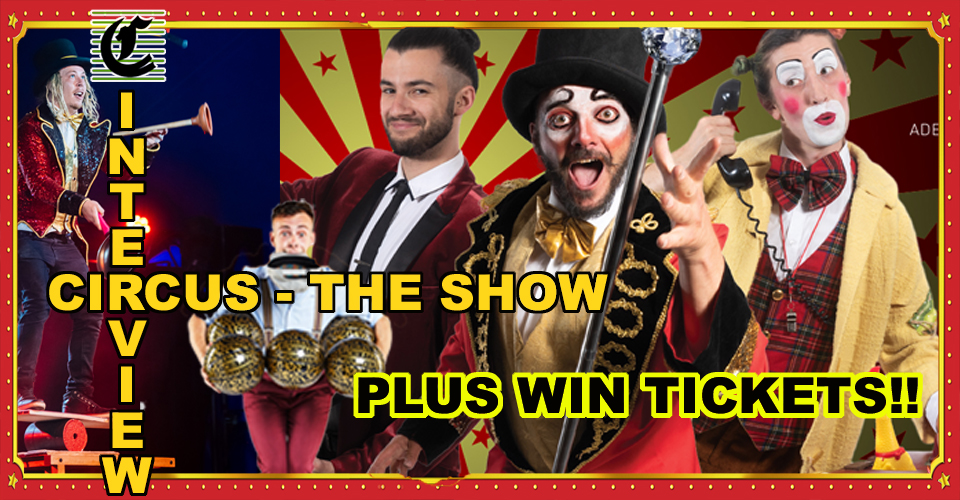 Roll up! Roll up! School holidays are here and it’s time to let the fun times ensue. And what could be more fun than taking the family to experience the fun, the magic and the sheer jaw-dropping wonderment of the circus! Presented by Victoria’s Showman Productions [The Greatest Magic Show/Adults Only Magic Show] the Adelaide Fringe 2021 hit CIRCUS ~ The Show returns to Adelaide and is making its way to the beautifully renewed halls of Her Majesty’s Theatre for three shows only on Mon 27 Sep until Tue 28 Sep.

Co-producers, production managers and magicians Sam Hume and Justin Williams are in day seven of quarantine as we speak and are loving the Adelaide weather, the Air B‘n’B accommodation, and being able to perform in Adelaide. But with most artists, COVID means that things can change in an instant and so they not only need to prepare a plan B but also a plan C, D and E; performers that are unable to get across the restricted borders need to be replaced – all with the hope that those back up artists can make it across to the Central and Western states. Sam explains.

“COVID is obviously massive and makes things very difficult, particularly in shows where you have cast members and performers that you would typically fly in from all different states to meet here in Adelaide for the show. All of a sudden you are dealing with restrictions from each individual state, which has led to a shift in our focus on to local performers from whichever city we are going to. It’s great to bring new artists to the stage but it’s also a lot more work during this deteriorating situation; from preparing new cast for the show and all the exemption applications – it can make things quite the hard slog.

“I’ve noticed in Adelaide/South Australia that there has been the biggest focus and effort taken by your state government here to do the best to enable performers and entertainers to come in and do what they do,” he adds. “Compared to other states – like WA where it is very much just a NO [laughs] and they don’t really take into consideration any of the things artists are dealing with.

“A month ago we were dealing with four different contingency plans which looked like:
1. Postponing the show
2. Going ahead with the show but replacing all Victorian cast members with Adelaide performers
3. Moving it back to later…
…there’s so much more work than we normally do just to fully develop these different contingency plans. “Each back-up plan needs its own back-up plan – just in case something changes.”

Considering that you and Justin are isolating for two weeks, why are there only three shows over two days?

“Her Majesty’s is quite a large theatre at 1500 seats a show – which is almost the equivalent of doing a three or four week Fringe season – so there are plenty of seats for everyone!

“Following that, we are free to continue working either here or in Western Australia and to continue putting work out, whereas a lot of people in the industry right now are unable to do that. But right now we are all really looking forward to performing our show for everyone.”

Does CIRCUS have a theme or a message for all the kidlets out there?

“The message throughout the show – and even at the end – is to not feel obliged to follow a certain career path or a way of living that you’re not passionate about,” he adds. “If you are interested in something – and even if it is weird and unusual from what other people are doing – that is not any reason to not pursue it. We want to encourage kids to pick up that unicycle and give it a go and to try as many different things as they can. All the performers in the show have spent their entire lives dedicated to a craft that is weird and unusual but they’re doing it because that’s what they love. We just want everyone watching the show to do the same.”

Sam Hume will delight audiences with his fine skills of magic and illusion, and Justin Williams performs the role of the chair-stacking, rola bola-riding, juggling ringmaster in CIRCUS. Sam tells us about the other talent that we will see on stage.

“Simon Wright is our clown for this show who has also performed with Splash Test Dummies, replacing Nathan Green at the last minute. We have been training Simon up over video call and then we will have two days with him once he arrives in Adelaide”, Sam says. “He is like the ringmaster’s annoying little brother who spends his time cleaning up the stage and obsessing about his favourite giant yellow balloon. This shy clown really wants to perform one day, if only the ringmaster will let him.”

“The rest of our regular Victorian performers couldn’t get across the border,” he adds, “so we now have Chelsea Angell (Head First Acrobats) performing the hula hoop act and the aerial sling. Adelaide’s Diamond Duo are a young brother/sister act who have travelled the world and will perform Adagio – a form of acrobatic dance. Also from Adelaide is Bavo, who does things with basketballs – juggling, spinning and basketball manipulation. Lyndon Johnson, from Gravity & Other Myths and Rouge, performs with the cyr wheel.

How much of the response coming from the audience do you feel from the stage?

“From the perspective from the family shows we perform all the kids are having a fricken awesome time,” Sam enthuses, “running around with smiles on their faces and participating as much as they can with the magic acts and being wide-eyed at the circus performances – which then carries on to the parents who not only get to enjoy the show but also get to see all the fun their kids are having. Put all of that together and everyone is having a great time, and we all can really appreciate that from the stage.

“We love the stories and videos that are posted on social media by people after the show; sharing how much fun their children had at the show and how much fun they had as a family.”

What else would you like to tell us about CIRCUS?

“This show debuted at Adelaide Fringe this year, which we wrote during last year’s six-month lockdown in Melbourne. Being unable to work or go anywhere, we tried to focus our creativity and make something productive out of it,” Sam says. “From Adelaide Fringe and then to Melbourne Comedy Festival in April, and then having the show postponed several times, to now doing the show in September here in Adelaide, the show has grown significantly in terms of the calibre of the acts we are using, to the amazing lighting that has been created – the whole stage, the set and the lighting has been developed incredibly fast in comparison to anything we have done in the past.

“This show at Her Majesty’s Theatre is the biggest and the best that we’ve ever invented; it’s so exciting to be performing in such a beautiful venue, knowing that the show was developed only six months ago. We are so excited about CIRCUS and we can’t wait to see everyone there.”

And, just for a little fun, if you were a flavour of ice cream, what would you be and why?

Thanks to Showmen Productions and Neil Ward Publicity, The Clothesline Magazine is giving away FIVE FAMILY PASSES (4 tickets only) to see CIRCUS ~ The Show at Her Majesty’s Theatre from 11am on Tue 28 Sep.

You must be able to attend on Tue 28 Sep at 11am. Competition closes at 9am on Mon 27 Sep. Winners will be contacted by phone and announced on Facebook.

Good luck and be sure to share with your family and friends.