Club Swizzle Is Set To Bring In The New Year At Adelaide Festival Centre’s Space Theatre With Their Own Blend Of Feisty Cabaret, Stunning Acrobatics And Debauched Fun – Interview 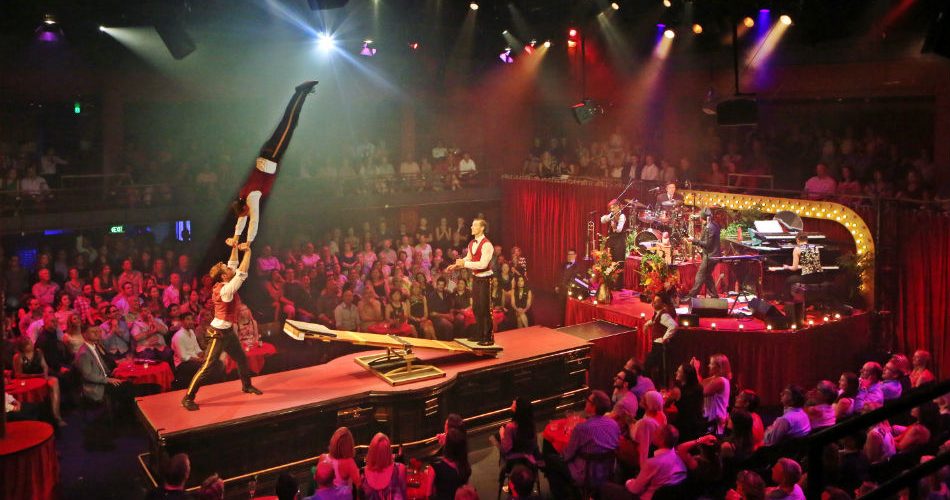 Decadent, feisty and outrageous cabaret, Club Swizzle is the cocktail party you won’t believe is happening. Brought to you from the producers of La Soirée and La Clique, Club Swizzle will bring in the New Year with a night of controlled mayhem where the rules do not apply. With in-house band Mikey And The Nightcaps, Drag King MC Murray Hill and a cast of sexy sirens and exotic divas, this will be an event of debauched fun and mind-blowing talent.

We speak with one of the boisterous acrobatic barmen from The Swizzle Boys, Daniel Catlow, who tells us all about Club Swizzle.

“Swizzle is a little bit different in the sense that we are really trying to push the boundaries of your normal kind of ‘sit down and watch it all happen in front of you’ kind of experience,” he begins. “We’re trying to break that wall, so even as you walk into the space, straight away you will realise that there is no stage in front of you and you are not confined to your seating area or anything like that.

“The setting is very much like a sprightly old-school kind of speakeasy with that beautiful old mahogany bar in front of you. As you enter, one of the handsome barmen will be feeding you cocktails… and it all escalates out of that. You’ll see acrobats on top of the bar, the old guy in the corner is now tap dancing up there as well; it’s heaps of things like that that come alive before your eyes.

“The main point was to get the audience involved as much as they dare to be, which is what I really enjoy about it.”

Club Swizzle had its premiere season in January at the Sydney Opera House.

“It was such an amazing experience to have that straight off the bat,” Daniel says. “Even though in some ways it was quite a lot of pressure as well – to get the whole thing up to the standard that we would want it to be. It was really cool and successful, which made for a great start.

“From there we did a season at the Brisbane Festival in The Spiegeltent.” 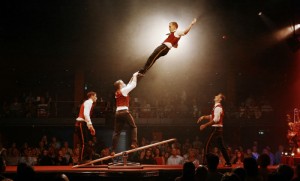 “We start on Tuesday 29 December and go for three weeks, with the option to extend if we need to. We definitely want to create an alive and energetic feeling with this show.”

The staging is very similar to being in The Spiegeltent, isn’t it?

“It is,”he agrees. “Which is what we were trying to recreate. The Spiegeltent has a great vibrant energy about it, and the similar staging seemed to fit perfectly with that beautiful old bar.”

During the Sydney season, you had guest performers such as Meow Meow and Movin’ Melvin Brown. Will they be part of the Adelaide season?

“We’re not quite sure as yet,” Daniel says. “The cast does change around quite a lot from season to season, especially as incredible performers such as Melvin and Meow have gigs all around the world. Of course we do have our core members, even though The Swizzle Boys’ line-up can differ at times.”

How similar is Club Swizzle to shows like Le Soirée, La Clique or Cantina?

“There are definitely some remnants of La Soirée in there, obviously, because Brett Haylock is the same producer of that show that has toured internationally for more than ten years, so I think he likes to keep some kind of essence of that in the show,” he says. “Club Swizzle is very much its own kind of show. Those others represent a certain era and style, whereas this is more loose and more open for things to happen in the moment; it’s highly likely that you will not see the same show twice, which is what we love about it.”

Being a Swizzle Boy is quite the experience, according to Daniel.

“We are there, ushering people in as they enter the venue, finding out how people’s day was, making sure they have drinks and good seats – which is something that has been quite different for us too. We’ve never been out on stage, in the performance area and interacting with people before a show has started before. It’s great when people realise we’re not ushers when we suddenly become the performers.

“We are, kind of, the through line or the thread of the show, performing five different acts throughout the night. We make a cocktail during a full-on acrobatic routine, we have a slapstick comedy routine around a chair, there’s a Chinese pole act, some hand-balancing… a bit of everything really.”

Daniel tells us there is a lot of audience participation during the Chinese pole act.

“Things can get quite hilarious, depending on who has been chosen to help out,” he says. “And the acrobatics involved are quite amazing.” 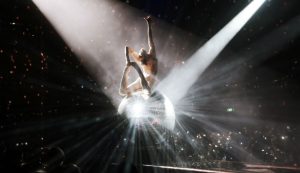 Although you have special guests perform during the seasons, who are some of the other regular cast of Club Swizzle?

“Murray Hill is our Drag King from New York. As an MC, he definitely has the gift of the gab and in not afraid to push people outside of their safety zones. Valerie Murzak does the most recognisable piece in the show with some contortion on the giant mirror ball. Laurie Hagan is a beautiful dancer and theatre performer who does a beautifully choreographed ‘reverse strip’. And then there is the gorgeous Ali McGregor with her huge singing voice. Each artist will have several of their own spots to shine throughout the show.”

Mikey And The Nightcaps, the band, will be onstage throughout, as Daniel explains.

“Mikey is an incredible composer who has done a lot of composing for movies in America and Australia. He’s the main man behind the event. The five-piece band has worked together for a very long time in one form or another; each of them are multi-instrumentalists that have a great banter between them. The music chops and changes – from Jazz to Heavy Metal – all in one track. That sounds like it would match up, but they just seem to make it work.”

Do you have a favourite part of the show?

“The whole vibe for me is fantastic,” Daniel says. “I just really enjoy seeing people getting involved to some degree. Whether they are initially a bit scared or timid by the whole thing, people always end up having fun and really enjoying themselves by the end of the night. It’s like a tip of the hat or an unassuming wink mixed with a night of debauchery, which is what I really like about it.”