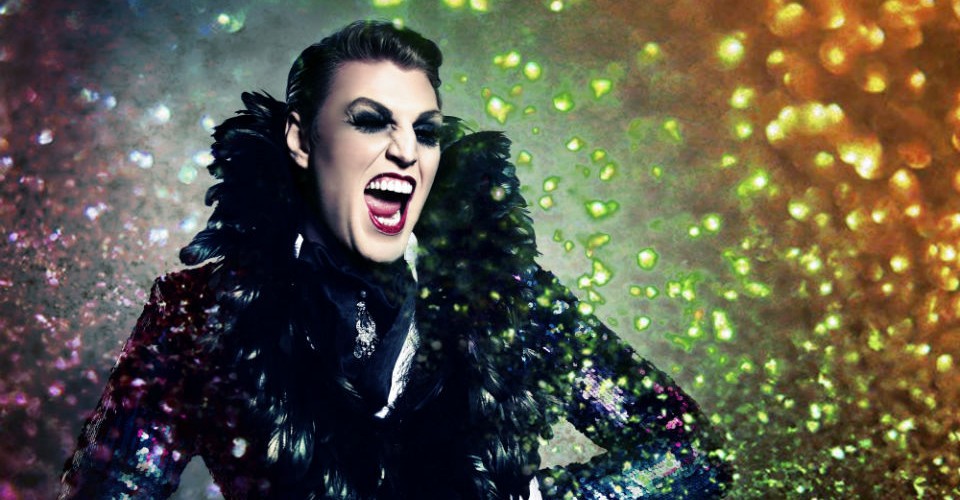 Following the rave reviews of the 2016 premiere Adelaide season, the creators of La Soirée are bringing Club Swizzle back to the Adelaide Festival Centre. A glorious concoction of air-defying acrobatics, outrageous cabaret and infectious musical revelry returns (with a twist), for a limited run. What better way to celebrate the silly season than by getting your Swizzle on with this brand-new night of sass and mayhem abounding with the cheekiest humans in show business, the Club Swizzle bar adorned with the gorgeously charismatic Swizzle Boys, amazing guest artists and with the evening’s soundtrack provided by the fabulous Mikey And The Nightcaps.

And who better to fill the spot of ‘host with more than the most’ but that fantabulously feisty virtual explosion of sequins, lashes and teeth, cabaret wunderkind Reuben Kaye. This flame-haired creature has a stunning voice with the devil’s wit to match, and is the perfect master of ceremonies to hold onto the reins of the uninhibited chaos that is Club Swizzle.

“That was my solo show, the Gala, The Backstage Club plus guest spots every night in the Piano Bar. I’m terrible like that; I’ll just keep doing gigs until my body gives out. It’s not an advisable way to live life, but it’s really fucking fun [laughs].”

Journey To The Centre Of Attention, which makes its debut at London’s Soho Theatre in 2018, certainly showed festival goers just how sassy and fabulously evil you can be on stage.

“There are a lot of cabaret artists that really indulge in the tortured cabaret performer element, but I kind of wanted to rebel against that because in 2017 there is a lot to be angry about in the world, but there’s also a lot to celebrate,” Reuben says. “So let’s do that! And the ability to be able to attack people for stuff that doesn’t matter – that’s the best part [laughs].

“I do get to have a lot of fun on stage, and now even more so that I’m part of this incredible show headed up by those titans of the industry La Soiree who are a huge Trojan horse of a sensation. After two years, Club Swizzle is returning with a new line up of acts that people won’t have seen before, as well as some old favourites. It’s just going to be brilliant!”

You’re taking over the hosting reins from drag king Murray Hill. Had you seen Club Swizzle before?

“Never! I was in London at the time so I came into this with fresh eyes – and had no clue what I was getting myself into, he says. “They said to just make it your own; it was only fair to tell them that I didn’t think they really know what that entails [laughs]. But I’m having such a ball of it; it’s dangerous that there’s so much that I’m doing that I’ve never done before like, dare I say it, risky stunts!”

Being thrown around by those talented acrobatic boys, I bet that’s tough!

“You know, it’s such a difficult life being hoisted up by four beautiful, fun, frisky, terrifyingly dangerous but gorgeously muscly men [big laughs]. People talk about the height of equality… I have to fight every day; it’s an uphill battle of ‘harder, a little to the left, don’t ever stop…’ all that kind of stuff… It’s such great fun! They’re so gorgeous; they’re enough to make me flood my basement sometimes [laughs]!”

And how hard it must be to not lay your hands on all of them!

“To be honest, I’m a creature of discipline, a master of self-control…” Reuben says as he loses himself in a fit of uncontrolled laughter.

Besides those already mentioned, who else will we see on the Club Swizzle bar/stage?

“Oh, well, that’s a big old secret,” he says. “But I can say that France’s Laurie Hagen – who does the reverse strip is coming back; Frédérique [Cournoyer Lessard] is an aerialist from Montreal; and this absolute madman Shay Horay (Rubber Band Boy) who is to be seen to be believed. I have no idea how I would ever describe to you what he does, but I promise you will love it.”

Maybe the only way to describe the indescribable is to gush!

“Exactly! Lucky the stage has guttering, so we can do that!” he laughs.

The stage is yours. Any final thoughts?