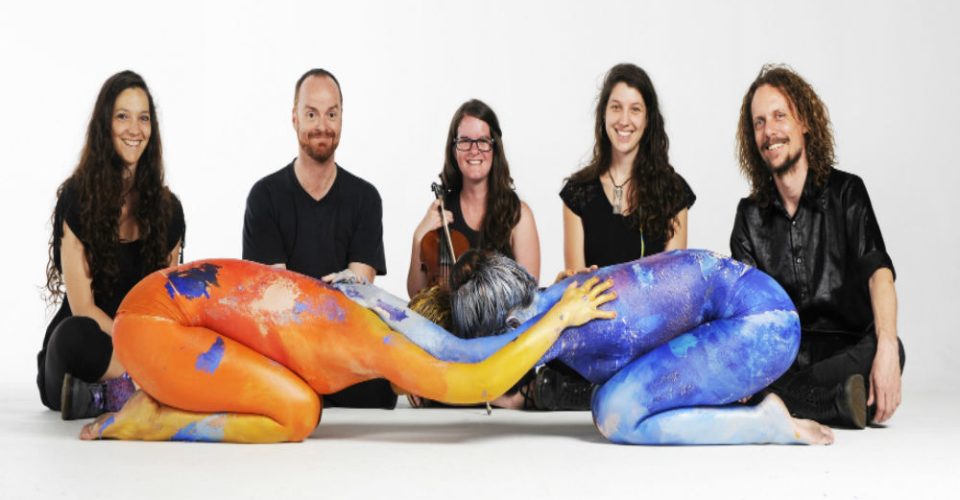 Counterpoint is a new show from collaborative, mixed art company We As Art, We As Artists, who have been performing at the Fringe since 2011. This show features twelve original songs written and performed by songwriters Mary Webb, Leon Hewer and Fergus O’Regan with Sarah O’Brien accompanying on violin, choreographed movement by Sarah Pierce and Courtney Bignell while being body painted by local visual artist Wendy Webb.

We catch up with Fergus O’Regan and ask him some questions;

“Our first gig as a company was in the 2012 Fringe, at the Grace Emily Hotel. If I do say so myself, we brought the house down. Second gig, not so much. We had a cascading cluster fuck of technical problems.”

“Maybe Sia Furler. Even though she doesn’t really perform in the usual sense these days, I find it fascinating the way that she manages her mental issues and still manages to put herself out there. And also the way everyone just seems to accept and embrace it all. An inspiration to the nut job in all of us. Maybe there’s hope for us all.”

“Robert MacFerrin. I would have his babies. If such a thing were technologically possible.”

“Hmmm…
These guys are pretty great. (Mary and Leon) Honestly, they’re about as good a fit for me as I’m likely to find. I know that’s corny and I don’t care.”

“I actually don’t use those technologies much at all. I tend to use YouTube or rely on my housemates to play stuff. Epic Rap Battles Of History is a pretty great channel.”

Favourite song line?
“Cos I’m looking for a big cock that I can bite off.
Acting like a tough shit. So you like to rough it, huh?
Got a whole penis. Don’t come between us.
Course you fucking smell it, cos I never clean this.”

“Last year’s WAAWAA was pretty great. Some of the hardest music I’ve ever done, crazy timing and stuff. Trying to do all this crazy counting while sounding beautiful and looking presentable was a challenge. Was such a pleasure to extend ourselves in that way.”

“Cello. Mos def. Cello players are all hot. Megans are also hot. If you know a Megan who plays cello, give her my number.”

“I tutor maths at Adelaide Uni.”

“Folding fitted sheets. In the words of Xena Warrior Princess, “I have many skills.”…..”

“I don’t think I’ve had this experience. Sorry to disappoint. I could make something up if you like.
(ahem) A live sloth. We had to call the zoo and customs, get shots and stuff. The sloth was really sweet, though.”

“I sit down when I pee. Always sit down, never spill a drop. It’s a no-brainer.”

“We met Paul McDermott at a Fringe event thingy. We were semi-naked and covered in blue paint. He was nice, but I don’t really get star-struck. He’s just a person. My life is full of amazing people, almost all of them not famous, so I understand fame is neither necessary nor sufficient for amazingness.”

“Bad spelling and grammar. What the fuck is “could of”? People who talk smack about maths. Sorry you got inappropriately contacted by your high school maths teacher or whatever the fuck reason you think is good enough, but it’s not maths’ fault so get over it. Your math phobia is sabotaging the intellectual success of your friends and family so don’t do it. People who walk slowly down the mall in large groups. Pants hanging half off ass. People who play my drum without asking. People who call my drum a bongo. It’s a djembe. People who fail to move to the back of a crowded bus.”

“There’s a lot of good in your relationship with (name of person). You should try to make it work.” Damn it, I was ready to leave, and then TWO of my closest relatives tell me this, independently. Ruined my last best hope of walking away from that train wreck with a shred of dignity intact. Oh well. We live and we learn.”

“A young man asked me for advice with women. I had only one thing to offer him but I think it’s a keeper, and it is this: “They’re all different.” Be mindful of this simple principle and you will be a lot less confused by things they do.”

“I don’t know. Lots of things. My life in general.”

“Tripped over any trees lately? How about a root?”

“Rainbow Paddlepop. It’s caramel flavoured. Why are rainbows caramel flavoured? It’s so arbitrary! You taste it, and it’s like, “OK, fine, I guess. This tastes pretty good. Caramel is actually brown, but hey.” Life is arbitrary. I am arbitrary. I’m also tasty, but not specifically in a caramel way.”

Counterpoint performs at Jade Monkey at various time from Sun Feb 15 until The Mar 5.