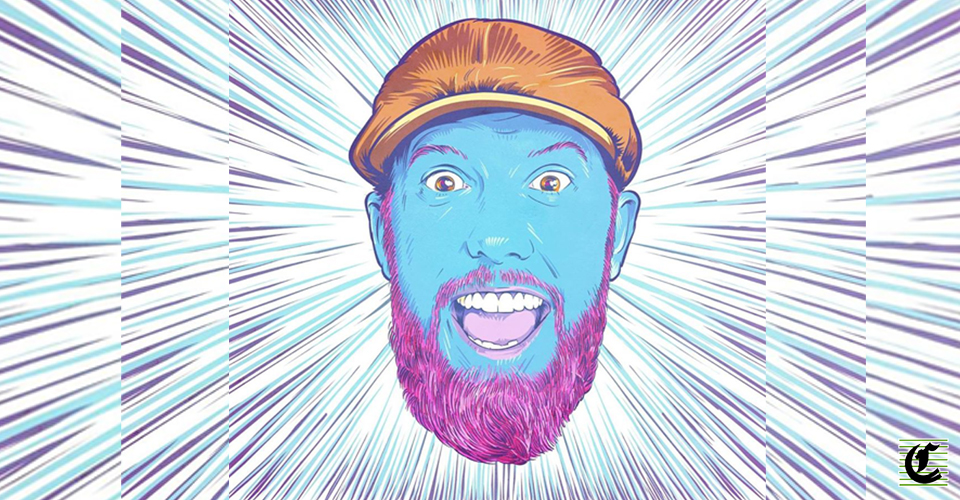 2020 marks the 60th year of the Adelaide Fringe, but it also sees the beautiful beast that is Adelaide Comedy turn twenty years old. Regarded around the country as one of the most positive, fertile and supportive scenes anywhere, Adelaide Comedy is an ever evolving creature. It has been instrumental to giving a start to, and help polish acts that have gone on to be among the countries top comedians.

For most of those two decades AC has been based at The Rhino Room and the guided by Craig Egan, who started off as a stand-up and ended up herding other comedians and helping them stand-up figuratively and sometimes literally. Fringe is the craziest time of year for Craig and Rhino Room with them presenting over 400 shows in five venues over the four weeks.

Ian Bell speaks with Craig Egan the man at the helm of the good ship Adelaide Comedy, and begins by asking about how Craig started his own stand up career in the nineties.

“There was definitely a comedy scene in Adelaide before we came along. In the eighties there were people like Dave Flannigan who had a twenty year run with venues like Comix Comedy Cellar, and in the early nineties there was Boltz Cafe. I started getting up and doing spots around 1996. Rhino Room first had comedy in 1998 run by Charlie Hill Smith and some other crew and I was definitely jumping up and doing spots there.

“But things changed when Mick (Krieg from Rhino) approached Justin Hamilton about doing something regularly. Hammo tells a story that when he was asked he said he’d only run the nights they way he wanted to, which made it a pure stand-up comedy focus. At that stage it was a lot of different art forms all mushed together, which was a wonderful thing about the nineties, Hamilton brought the focus onto stand-up. It could be anything it wanted to be so long as it was making people laugh. Lehmo was  running PJ O’Brien’s on a Tuesdays and Rhino on Wednesdays, and that was really the start of Adelaide Comedy as we know it.”

“Well you had Lehmo, Hamilton, Adam Hills was a regular getting up at the gigs, Mickey D, Adam Vincent, Dave Williams, and Jo Coventry and Tori Hodgson were The Dangerous Curve. So a great crew of really talented performers. Alex Cohen did a lot of stuff with Dave Williams and The Bhunta Boys were around then too. Alex sadly passed away from bowel cancer, and although he got to say his goodbyes to everybody, his passing ended an era for some people. A bunch of comics moved interstate, which happens every few years there is a comedy exodus to the East coast or overseas. Hamilton did all the grunt work of making it happen though, he always said that Lehmo was always late but always arrived at the right moment to negotiate a better door deal with the venue.” 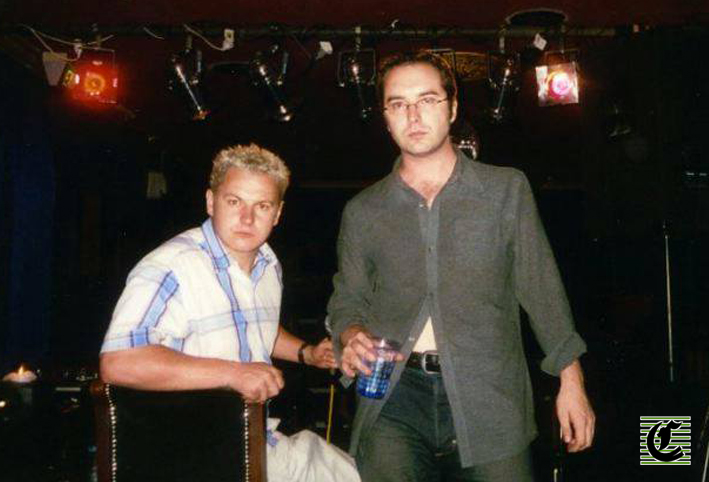 Some of the names you have mentioned have become titans of the industry.

“That’s right and that continues as we go along Hannah Gadsby was part of the Adelaide Comedy crew, I look through the old posters and she is on all of them.  She was always getting up and doing spots at the Marion Hotel and going on country tours with us. Maria Bamford spent a lot of time in Adelaide hanging out and she was getting up and doing spots, working with Steve Sheehan and doing duo stuff together. Bec Hill is a fantastic young comedian who is killing it in the UK got her start with us. It is incredible how many top comedians have come out of this town.”

Considering AC was multiple nights in multiple venues for many years, plus the amount of shows during Fringe able to have favourite performances or shows that stand out?

“The first one that comes to mind is The Death of Trav Nash. Trav came to me and said ‘Egan – I want you to promote the Eulogy of Trav Nash’ and I want you to promote it like I have died. He booked all these Adelaide Comedians to eulogise him. For the whole show Death was in the front row with a hooded cape and a sickle and he got up at the end and it was Trav revealing he wasn’t dead. I had people coming up six months later going ‘Sorry about your friend’. We had a goat do stand-up one night. There was a guy in town who travels round country pubs with his goat, Gary and he was in Rundle Street looking for a gig and I thought ‘I’ve got gigs – let’s book the goat!’. There was a couple of acts I had forgotten that were booked on that night ‘So we got bumped for a goat?’. The goat was headbutting me it was hilarious.”

During the Fringe the Rhino Late Shows are absolutely legendary, there must be some highlights from those?

“Any night when the comedy just flows, unexpected and crazy things happen is gold, but The Late Show has become this beast of it own. It late night, it’s during the festival, the audience are up for anything. And because Rhino is like the home away from home for comedians from all over the world, everybody is happy to hang and get up in what is a safe space for them just play with each other. So you’ll see Will Anderson, Charlie Pickering, Annabelle Crabbe, Hammo, Lehmo all the crew playing together, bouncing off each other. Those are the moments that shine the brightest.

“So many people watch comedy on TV or DVD and that can be great but it’s not the same as being in the room, feeling the electricity, getting the performance only you see. It’s the spontaneous things that happen, live in front of you. You can’t pause it, you can’t rewind it, it has to be lived in the moment and there is a level of laughter being in a comedy room you can never get watching a DVD on your own.” 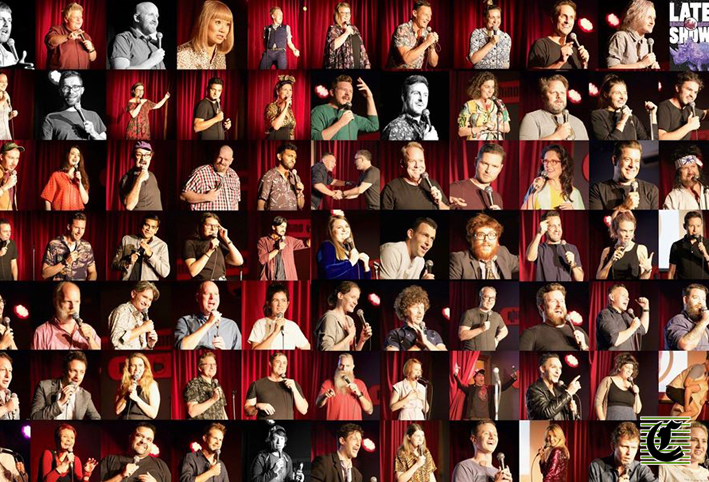 Especially with The Late Show, people do not know who they are going to get, it’s like a comedy lucky dip.

“Mostly we are not allowed to tell. All these people are in town trying to sell tickets to their shows are we are not wanting to undercut any of that. But it is like a fantastic taster plate for eight or ten gigs. People come and always have a brilliant time and then go ‘He was awesome, we have to go and see his show’, which was the original idea in the first place. I love that not being able to say who is on has built an audience that trusts us to put on a excellent show every time, and likewise that trust extends to the comics who know they are going to have a receptive audience.

“The roar that comes out of that crowd when a big name is announced is electric. One of the really early ones the line-up was Ross Noble, Lee Mack, Daniel Kittson, Lehmo and Hammo all on stage together. At the time we were the only late show around, these days any venue operating runs a late show, at the time there was us and one other venue and we would swap and change between us. Every act in the Fringe would come down and jump up for a spot. It’s slightly harder these days because we used to do The Late Show Tuesday to Saturday and simultaneous shows upstairs and downstairs, but there are so many late shows now, which is great for the performers and the exposure they can get.”

How many rooms is Adelaide Comedy running this Fringe?

“We are in The Howling Owl, and at Rhino we have four rooms The Rhino main room upstairs which where we are based all year round. Downstairs which was the original Fasta Pasta we have The Drama Llama, The old Fasta Pasta Kitchen is now Hell’s Kitchen. Then at the end of last year I said to Mick, y’know we have a cupboard that we could put acts in? It’s actually an old store room but we’ve made it into a 24 seat room, The Alley Cat, which is perfect for comics who are starting out or local comics who want to sell 24 tickets and tell everybody they sold out every night. Intimate shows like that can sell on word of mouth, keeps their costs down. It’s going to be a lovely little room.

“Also we are back at The Marion Hotel after a years break for them to do renovations and me to have kids. A lot of people down that end of the world have been asking when we will we return, and the answer is now and it’s selling really well. One of the events we are doing is A Concert for Belinda Schmitt. Belinda was a massive supporter of comedy and music in this town and if you went to any kind of gig in the last 20 years you would have seen Belinda. She was such a fan, and I am a fan of a fan. She passed away last year sadly, so we are putting together a line up she would have loved and all the proceeds are going to Novita. It’s nice to do something for an old friend.” 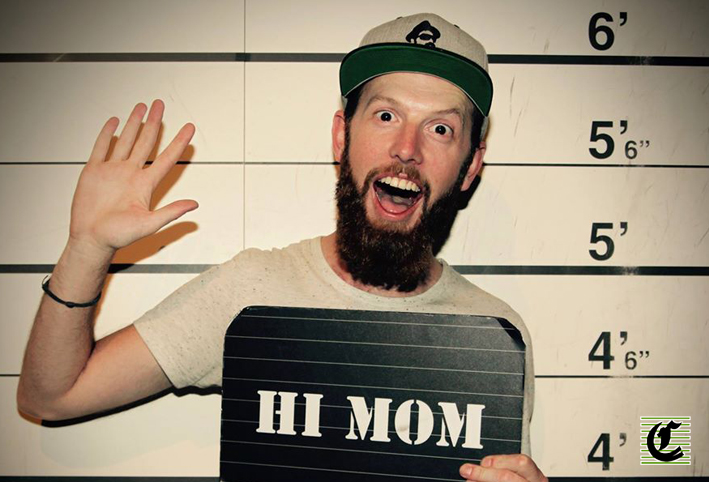 “So far, we often have to add extra shows and this year we are doing a thing called Tuesday Night Flyer. Often comedians arrive on a Monday and their run starts on a Wednesday or Thursday, so Tuesday Nights we will do a show which we’ll have people get up to spruik their shows and tickets will be super cheap.

“There’s heaps to see at the Adelaide Comedy Rooms this Fringe 2020 include alumni Justin Hamilton and Lehmo and some of the best comics in the festival. Amos Gill, Demi Lardner, Tom Walker, Becky Lucas, James Donald Forbes McCann, Gordon Southern and internet sensation Friendly Jordies. Check out the full AC Fringe line up at adelaidecomedy.com . If you you sign up to their mailing list you get two tickets to a show for free.

“As Craig always says, ‘Comedy Doesn’t Finish When The Fringe Does’.”

Check out everything AdelaideComedy.com HERE.

Book at FringeTIX on 1300 621 255 and adelaidefringe.com.au. Click HERE to purchase your tickets for Rhino Room Late show.