WHAT A CROC! LEGENDARY FRONT PAGES FROM THE NT NEWS ~ Book Review 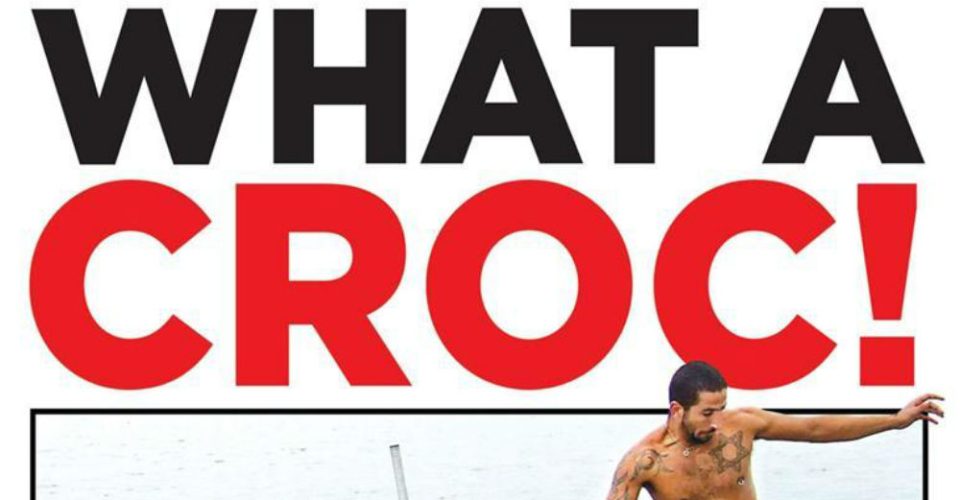 The NT News (a favourite target of the ABC’s Media Watch) has been going since 1952 but, according to an authorless introduction, has only gone in for ludicrously attention-grabbing headlines during the last five years, and this initially amusing but eventually annoying collection gathers together an awful lot of their struth-inducing sensationalist reporting.

With reproduced pages gathered into yahoo/yobbo-friendly chapters, we’re (usually without much helpful context) treated to:

Crocs V World (the inoffensive ‘Great Australian Bite’ alongside a photo of a huge beast seems quite restrained a few pages later when an image of another croc is headed ‘It’s Enough To Make You Ship Yourself’ and, later, an idiot swimmer near a popular hangout for man-eaters is labelled ‘What A Croc Head’) 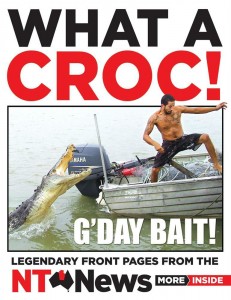 Going Troppo (with ‘Screw This Town’, as a hooker leaves after her sex toys are stolen, ‘Man Stabbed With Fish’ and ‘Taxpayers Fund Bondage Workshop’)

Planes, Trains And Automobiles (including ‘Nude, Where’s My Car?’, which is all about a Darwin rental company that offers free van hire if you turn up in the nip, and ‘Trouser Snake On A Plane’, which is best unexplained)

And, finally, The Naked Truth (and you don’t need too much background to guess what the story was behind ‘Nudists Want Bigger Beach’, ‘Eyeful Tower’, ‘Dumb And Bummer’ and ‘Topless Heroine Puts Out Hotel Fire’, bless her).

Stone the bloody crows, pull up a jumbuck and take the weight off your billabongs, and please, let’s have a moment for national redneck pride…