The Doug Anthony AllStars: DAAS Live! And In Your Face – Interview 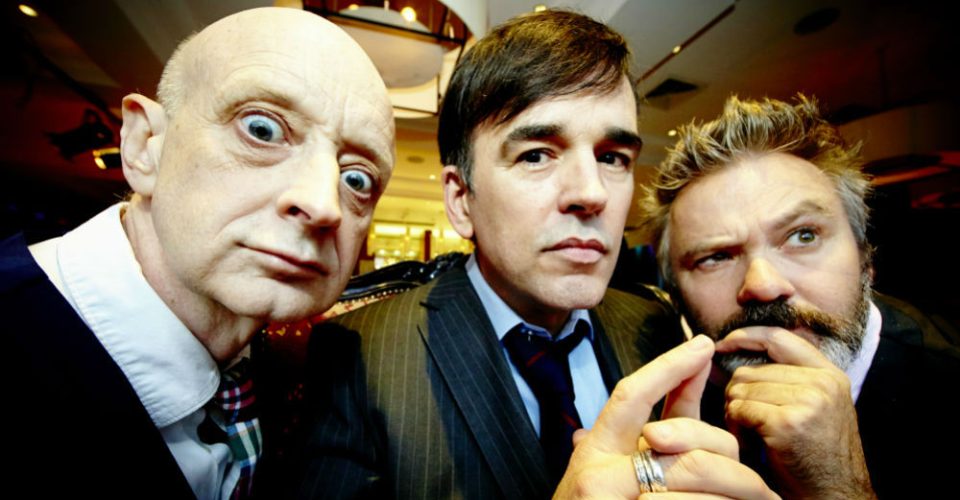 It was 1984 when The Doug Anthony AllStars began busking on the streets of Canberra, making so much of a nuisance of themselves with their controlled chaos that by 1987 they had taken over the Edinburgh Festival, stamping their mark on the comedy world. Two years later the musical comedy trio performed on ABC’s live-to-air The Big Gig before going on to launch their ABC sitcom DAAS Kapital. DAAS have confronted and shocked while being loathed and adored for their moral mayhem, with the show being banned in Japan and Germany.

Original members Paul McDermott (Good News Week/GUD) and Tim Ferguson (Funky Squad/Don’t Forget Your Toothbrush) have teamed up with Paul ‘Flacco’ Livingston (The Big Gig) to unleash themselves onto Adelaide audiences for the first time in 20 years.

We answer Tim’s phone call to the fanfare of Bill Conti’s Gonna Fly Now [theme to Rocky] and Tim welcoming us to the interview in his best macho Triple M voice, setting the hilarious and slightly sarcastic tone for the entire interview.

In another life, Tim is a lecturer at RMIT as well as the author of Carry A Big Stick about his life with MS. We discuss the downsides of people being labelled by their disability rather than by their name, gender or job.

“People can be scared of such things,” he begins. “In the front of their mind when they are dealing with someone who, like me, is travelling in a wheelchair, it’s the first thing they think of and it takes them a while to get used to it.”

So does this mean that you do sit-down comedy these days?

“I do sit-down comedy, get-wheeled-around comedy, I can do stand-up comedy but it just doesn’t make people as scared as being in a wheelchair. Wheelchairs scare audiences and I kinda like that!” 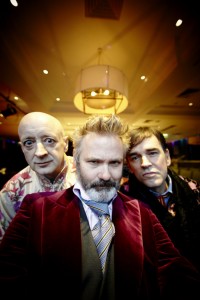 You guys have always liked to get in people’s faces and push the limits. Is this new scary side of you part of what brought DAAS back to the stage?

“Oh yeah!” he says. “The new show we’re doing is a reinvention of the AllStars ethos so, it’s still there – baffle, encircle, terrify and destroy – but we just have different subjects now. I mean, we are the old men of Australian comedy; we’re the Travelling Dougburys!”

You’ve also been called the masterful legends of comedy.

“Well, that’s what you say about people like Yoda! We’ve just passed the age where they think we must be a legend of something… We’re still offensive; we’ve even had walkouts – which are just hilarious,” Tim says. “The show is emotionally confronting and actually better than what we did in the past. It’s certainly funnier in the sense that it’s scarier and, between me and the two Paul’s, we have 100 years’of comedy experience that we didn’t have before – which is why we used to do a lot of shouting and shirt-fronting people. Whereas now, we go straight to cock-punch! [laughs] And I’m in a wheelchair so I’m at exactly the right height!

“We’ve had more people weeping during the show than before. We used to have at least one person crying for God-knows-what reason, maybe because we singing some dreary cover ballad, but the narrative of this show much darker. People sob, weep and laugh; it’s a much harder show to survive intact!”

Why is that? What are you doing to them?

“Maybe we might mention the wrong thing; some topics might be a bit soon for some people,” he says. “But we’re The Doug Anthony-fucking-AllStars and people have had 30 years to get used to what purchasing a ticket to our show means. The idea of these new shows, including when we tour around the world, is to cover material that nobody else can cover – to talk about things that new comedians don’t have any connection with; death, disaster, famine and cruelty still have their charms for us.

“New comedians like to talk about the difference between boys and girls – which can be very funny – but we’d rather talk about life and death and the 20 years in between when your bones will seize up, your muscles will atrophy and you mind has a cramp! We’re talking about the darker end of life simply because we’re all facing it. And because it’s a little bit scary, it becomes funny because fear and laughter go together like laughter and fear [chuckles]!

“We’re the first ones to get our generation pregnant with the idea that in a decade a lot of them aren’t going to be in the audience… which is enormously appealing to our younger fans,” Tim adds. “We have these interesting audiences filled with 16-to-25-year-old screaming kids who have seen us on YouTube mixed with older people who are squirming in their nappies.”

Tim declares that DAAS Live! is not a victory lap show but a rebirth filled a whole bunch of new stuff.

“We’re doing our first world tour now and will do another in 2016, 2017 and so forth. It’s just so much fun hanging around those guys. Paul Livingston is just a genius. He was always our mentor and now that [original member] Richard Fidler is a conservative ABC radio shock jock and is busy and can’t come on tour, working with ‘Livo’ on stage is hugely exciting for me and Paul.” 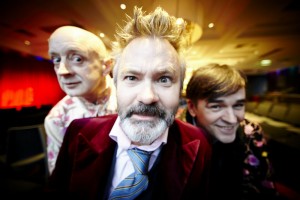 Paul Livingston has not only filled the guitar-playing spot of Richard Fidler, but he has always been a mentor to the trio since the earliest of days.

“Livo is a gifted guitarist, which is great,” Tim enthuses. “I’m writing new poetry for the women out there; someone has to stand up for the women because it can’t just be Tony Abbott. He’s the Minister For Women and he has a penis – good on him. Obviously there was no one else in the Cabinetthat had enough merit for the position. He’s ignoring women with Prime Ministerial force, and I’ll be addressing that in my poems, to rouse the spirit of Adelaide’s women.

“Most of the show is new original songs, some are rewordings of our older songs – because most people no longer know who George Michael or Renee Zellweger is anymore,” he adds. “Certainly Renee Zellweger doesn’t look like Renee Zellweger anymore, so we’ve had to change a few of the references as well as the whole mindset. In the old shows, Paul and I used to pick on Richard, but we can’t do that with Livo because he’s too dangerous, so the dynamic of the trio has undergone significant change… it’s almost unrecognisable.”

People who take the mickey out of disability that don’t have one get frowned upon. How do you and DAAS deal with that subject?

“Disability is just one of the things The AllStars deal with, with as much insensitivity as we can muster,” Tim says. “If you’ve got a disability, disability is funny. What else are you going to do, really? You can cry or you can laugh. But it’s usually other people who get offended on their behalf. So, it comes up a little bit but we try to look at different aspects of things like me being in a wheelchair and what that means.

“There is a principle in comedy that you punch upwards and not downwards, meaning that you punch the people with more good fortune and nobody complains – which is why you can punch politicians and everybody cheers! Anything else is just like bullying.”

Do you judge how well your show goes by the number of walk-outs you get?

“Well, we’ve only had a couple but, who knows, maybe their bladders exploded?” he laughs. “Actually, we base a successful night by the smiles on their faces, the laughter in their hearts and the tears on their cheeks… and also the stiffness of their nipples is another good way to see if people are still awake. Flaccid nipple means you’ve lost them!”

The Doug Anthony AllStars performs DAAS Live! at Her Majesty’s Theatre from 8.00pm on Thu Nov 20 until Fri Nov 21.

With Fri Nov 21 completely SOLD OUT, click here to purchase your tickets for Thu Nov 20.

All images courtesy of Shane Rozario