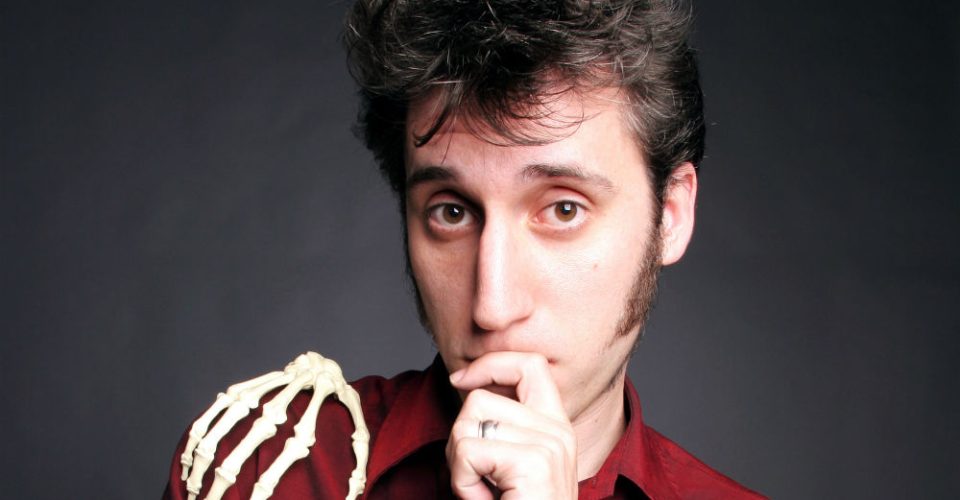 Comedian Dave Bloustien is getting older and has some thoughts to share on the subject; aging, mortality, love and desire. The Tinder Profile Of Dorian Gray loosely follows the last 18 months of his life, through the breakdown of his marriage, and his decision, at the age of 39, to try dating for the first time. We sent Dave some questions. Here are his thoughts.

Tell us about your first comedy gig – when and where and how did it go?

“I was about 14 years old, on a summer camp in high school and I entered the camp talent competition. I didn’t really understand the importance of writing original material, so I did a bit of Colin Lane’s (of Lano & Woodley) ‘Sound Mime’, which involved three different mimes with the same sound effects. The audience was… confused. But I didn’t get involved in open mic comedy until I was about 28.”

“I’ve always been a comedy fan, spent a large part of my childhood listening to my parents’ comedy albums on vinyl. I used to watch The Big Gig religiously, and the first live comedy performance I ever saw was Lenny Henry Live And Unleashed, on TV. I just didn’t realise it was something that I could do myself until much later on.”

Who is your favourite comedian?

“Wow. So many. Probably Stewart Lee, for the way he breaks down comedy into its constituent parts, but my favourite Australian comedian right now is probably Kitty Flanagan. She just aces every element of traditional stand-up, from writing to observation to narrative and performance.”

Who is the comedian you would most like to be?

“That’s a tough one. Ro Campbell and Jon Bennett have both found a way to spend their lives travelling the world as comedians, and collecting incredible experiences along the way. That nomadic, vagabond lifestyle doesn’t really suit me, but sometimes I wish it did.”

What was your best gig, and your worst – and why?

“Worst gig – a high school formal on a boat that ended up in court. They decided one of my jokes about the Cronulla riots was offensive. To be fair, I was making fun of racists, and the gig was in Cronulla.

“Best gig – I’ve had lots of best gigs, but I did just perform in a 24-hour improv show in Perth and was so deliriously happy and silly at 7am that it felt like the best gig ever.”

When not performing comedy, what job do you do?

“Right now, I don’t. But normally I’m a gag writer for TV. In the past that has included Good News Week, The Glass House, Randling and Back Seat Drivers.”

“I have many, but my most useful is probably that I cook a kick-arse shakshuka. I also play a kick arse recorder. I can play the Chinese dance by Tchaikovsky and both parts of the Ode To Joy on two recorders, either side of my mouth. It also means (apparently) that I can play the sax, which would have been really useful in the ‘80s.”

Which celebrity left you star-struck?

“I once met Neil Gaiman and realised just before I met him, that I was wearing a Doctor Who scarf. I took it on and off about six times, before I said hello.”

Who is your secret crush?

“If I told you, it wouldn’t be a secret and then Parker Posey would know.

Where would you most love to time travel to and why?

“Back to the 1980s in London, when everyone was angry and economically depressed and alternative comedy was about to explode. I think I’d do well on the circuit then.”

“Best advice: end with your strongest joke, and be a bigger version of yourself.”

“I was offered to be the head writer on the pilot for Talkin’ About Your Generation. I really loved my job at the time and wouldn’t give it up, but also: “Three teams representing Gen X, Y and Baby Boomers? That’ll never sell”.”

“No. But I did do that at a comedy show once. I was four, and the comedian was hilarious.”

What’s your favourite or worst heckle you’ve ever had?

“You’re doing fine. Adam Hills started out just like you.” At my first ever stand-up show at the Adelaide Fringe. It’s both my favourite and my worst.

“Masala and fig, because it’s often unappreciated but always delicious.”

Dave Bloustien performs The Tinder Profile Of Dorian Gray at The Producers’ Warehouse from 6.20pm on Sat Feb 28 until Sun Mar 15.