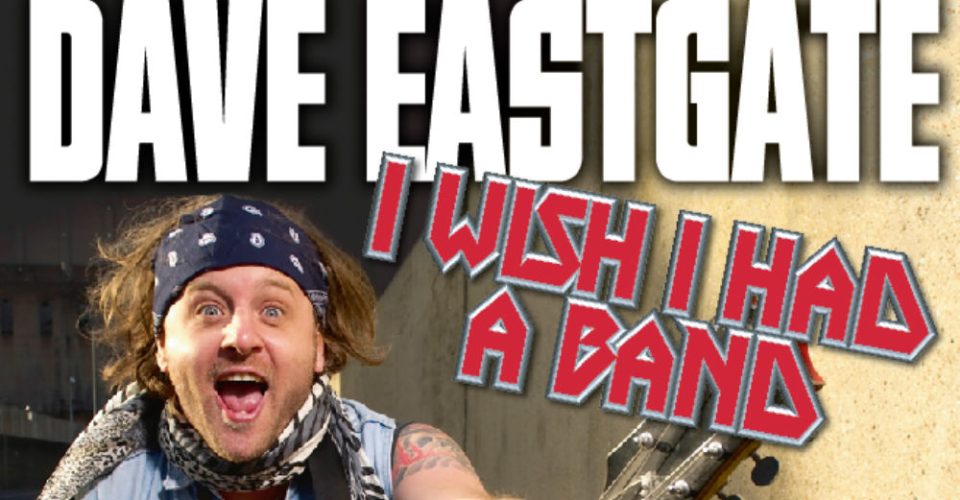 Australia’s hottest musical comedy genius and star of Maximum Choppage, Dave Eastgate is ready to strap on the leather, crank up the metal, and metaphorically smash your face like a plastic pint cup with his signature blend of stand-up comedy and balls out rockin’ thunder!!! At least, that’s what Dave tells us.

We sent Dave some questions. Here’s what else he had to say.

“It was 1988, I was 9 and the school I went to in Port Moresby, Papua New Guinea, had a talent show. The day before the show I pretended to be sick so I could stay home and practice my routine which was completely ripped off from Eddie Murphy’s Delirious. I think it was the BBQ sketch minus the profanity. I fashioned a suitable ‘comedy costume’ which was some bright yellow pants and a Hawaiian shirt, I even styled my hair kinda like Ed Grimely. When I turned up, I was told that I had the dates wrong and the show had occurred the day before… I had to sit in class in my costume and Ed Grimely hair while the other kids were in uniform… It was the first gig I missed because I got the dates wrong, it wouldn’t be the last!

“To put it simply, I was the class clown and it was a natural progression… I just love making people laugh.

“A mix between Robin Williams and Jack Black because I wanna do stand-up, sketch, film (comedic and dramatic) and still rock out with my music!”

“Dannii Minogue. We’ve worked together on Australia’s Got Talent and X Factor for years in my capacity as a TV warm-up-guy. It’s weird, she’s actually a good mate; we’re an unlikely pair. Kirk Hammett from Metallica gave me his email on a beer coaster that I still have, after a mutual friend introduced us and we hung out a few times on their last tour to Australia in 2010 but he hasn’t replied… Maybe I shouldn’t have opened with a nude pic?”

“Dana Carvey as Garth in Wayne’s World, when he pounds out a killer drum solo and says, meekly, ‘I like to play…’ He actually played the solo himself.”

What job do you currently perform in your alternative life when not performing comedy?

“I’m an actor. I’ve done a lot of commercials over the years, the latest being the Westpac ad where I play a creepy, annoying home loan who stalks a couple of home owners. I had a cool part in ABC1’s new drama, Hiding and have a lead supporting role in Maximum Choppage on ABC2 as the character of Egg. I’m about to start on a brand new sketch comedy show on Comedy Channel in March…”

“I am tri-lingual. I speak fluent Japanese and Papua New Guinean Pidgin as well as English. I’m learning Arabic.”

I work with a lot of celebrities so I’m a little disaffected by it but obviously, Robin Williams was unbelievable. Jack Black was similarly awesome. I met him backstage when my best mate, Damien Power supported Tenacious D at the Opera House… Brian May from Queen saw me perform in Edinburgh and gave me a hug (there’s photographic evidence of all of this) but I was never a huge Queen fan even though he’s a legend… But when I was introduced to Metallica, my favourite band of all time, it was possibly the greatest moment of my life! I didn’t know what to say, I was literally lost for words. I sat there in silent disbelief for what seemed like an eternity, then finally just said, ‘I’m so sorry, I’m losing my shit!’ and Lars Ulrich, their drummer, just pulled me into his chest, stroked my hair and said, ‘It’s ok. Just lose your shit bro, just lose your shit’.”

“People who name drop! Stop bragging! No one cares!”

“Samantha Armytage but I don’t want it to be secret anymore! I wanna shout it on the rooftops! Or at least publish it in an online interview…”

“I’ve still got all my heavy metal posters from the ‘80s. They’re on the walls in my apartment! My ex-girlfriend hated them! Ha ha! That’s why she’s my ex!”

“Matt Okine – he’s such a dream boat, Jane Kennedy – hot AND can cook, and Damien Power – he’s my best friend and I still try to avoid him at every chance!”

“I had one at a corporate one year that was filmed, went viral and ended up on BuzzFeed… Dunno if it was the best or worst…”

“Is Crystal Meth a flavour???”

Dave Eastgate performs I Wish I Had A Band at Gluttony’s Piglet from 9pm on Thu Feb 5 until Sun Mar 15.