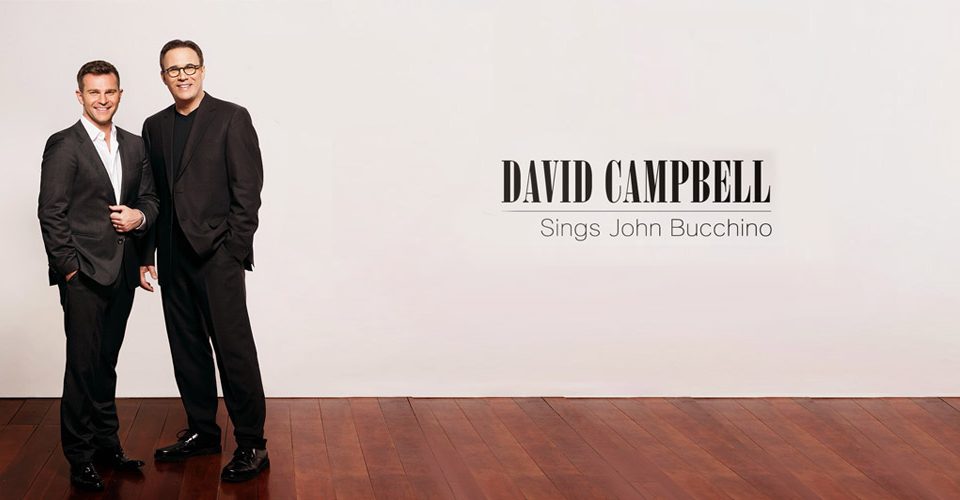 The name David Campbell is recognisable on so many levels: co-host of Nine Network’s Mornings, son of Aussie Rock legend Jimmy Barnes, father to Leo, husband to Lisa, singer, musical theatre performer, ARIA and triple Helpmann Award winner, recording artist – and the list goes on. John Bucchino is a Broadway composer and lyricist that has written for and worked with some of cabaret’s greatest performers; he, too, has a long list of accolades. Yet, it was somewhat of an opportune moment that brought these two ‘over achievers’ together to create a friendship and working partnership that can not be divided by distance.

The Clothesline is happy to be speaking with Campbell and we begin our telephone conversation by suggesting that during his time as Adelaide Cabaret Festival Artistic Director he implemented some fantastic innovations and wondered if he missed that kind of involvement with the event?

“I don’t know if I miss it… no, actually, I do miss it,” he indecisively replies. “It was a wonderful period of time. It was where Lisa and I worked together and developed our working relationship into the one we still use now; how we communicate and create things together as a team. We created a lot of the shows during our time there. Artist came to us and us to them with ideas; it was a fantastic collaborative effort which Lisa and I – along with a few other producers – are recreating here at Sydney’s Hayes Theatre, so we’re delving back into that again.

“I guess the thing I miss the most about the Cabaret Festival is walking around from night to night and talking to people about what they liked, what was or wasn’t working, what is or isn’t happening. It was great getting that immediate feedback; I would do that more than seeing just one show on any given night.”

You’ve been very busy with recording a new album, working on TV and being a Dad. But many years ago you and John Bucchino had a chance meeting that eventually lead you to be working together. Did you just happening to bump into each other and strike up a conversation?

“It wasn’t exactly a ‘bump’ as such,” Campbell suggests. “I first went to New York in 1996 for only three weeks, but started receiving some attention from the shows I was performing. People were really helping me, in particular on woman who was extremely kind and a champion of young cabaret performers. She took me to see Amanda McBroom [The Rose] who was performing her solo show at Carnegie Hall. Amanda happened to perform one of John’s songs and I was instantly drawn to him and his music.

“When this lovely lady introduced us, John really didn’t want to have anything to do with me,” he jests, “thinking ‘who was this guy from Australia?’ But then we started talking, went for coffee, got together for a sing, and after hearing my voice agreed to start letting me sing and record his songs. It was through that we became really good friends – and our collaboration helped to grow that friendship.

“It’s great to stand on stage with one of your best mates who you also think is extraordinarily talented. I think John is properly gifted and his songs really speak to people,” Campbell adds. “I guess to put a fine point on in, anything in life is a chance so yes, maybe ours was kind of a chance meeting.”

There’s been a ten year break from performing together. Why so long between drinks and what brought about this reunion?

“The break came about because I moved back to Australia just before performing as Johnny O’Keefe in SHOUT! – The Musical,” he recalls. “Prior to that, we were doing a lot of shows together around America with an early version of this show. But we also brought John out for Cabaret Festival a couple of times.

“The impetus to do this project was wanting to do something together again as well as my desire to return to the studio and record something after doing TV and raising Leo for a couple of years. It was time to see what was out there, to do something new and intimate and to have fun with people that I trust, and it all just lined up that we could do this together.”

Did the album promote the show or vice versa?

“I think the show idea came first? Or was it the album? It’s the chicken and egg really! We wanted to perform at the Cabaret Festival as well as record together,” Campbell states. “We do a song cycle from John’s Broadway Musical A Catered Affair and I’ve sung on many of John’s projects over the years so we both had similar ideas of the songs we liked best. But, the live show has a lot more stories and songs.”

What would you say are Bucchino’s most recognised songs?

“In the ‘90s I used to sing Grateful and Taking The Wheel which are two songs of his,” Campbell replies. “John wrote the song Better Than I for the DreamWorks Animation movie Joseph King Of Dreams which is a sequel to The Prince Of Egypt; it’s probably one of his more famous songs. But John has had songs sung by Liza Minnelli, Art Garfunkle and so many other amazing people. He has a huge fan base, which is really starting to build here in Australia.”

Campbell mentions that he spent three years writing and recording an album that never got released which he felt burned him out from song writing ever since.

“Having said that, John has pulled a song called Say Goodnight from the archives for this show that he and I wrote together, so that could be another door that opens up again.”

Between television, recording, performing, creating and parenting, how do you juggle all of these things and keep your sanity in tact?

“I’ve pared down the music over the last few years after doing a lot of big tours around the country,” he explains. “I love doing Mornings with Sonia Kruger which has given me the opportunity to be at home with Leo – to be a father that was around, which was more important to me than touring. You only get one shot at parenting. I would still do spot gigs here and there but I didn’t want to miss out on anything.

“This is my first foray back into the music, now that Leo is going to school. He’s got his own character and we have a bonded relationship, but I didn’t want him to feel like Dad was never around. Lisa and I work as a team; we are very aware that we are building a human here and we want him to be the best one that he can.

“Leo is older now and he has become more involved in what Lisa and I are doing,” Campbell adds. “He likes to come to the theatre and the studio with us, especially because he and John sit and play music together; Leo thinks he is more his friend than mine [laughs].”

Campbell and Bucchino’s Adelaide Cabaret Festival show was initially meant to be a world premier, but it seems that Melbourne and Brisbane just couldn’t wait their turns. But, not to be outdone by our neighbouring states, their new CD will be launched at the first of their three shows – Fri Jun 14 – and the pair will be signing copies for everyone! Campbell reveals that the album has been released under their own independent label: Social Family Records.

“It’s been so refreshing and fun doing this all ourselves,” he enthuses. “I’ve been so used to being a part of a big machine with Sony where there are so many people to help you and get your through it all the time, which was great, but there is something very empowering about doing it independently. I guess this is what the new world order is all about!”