Deep 70s with DEEP THROAT THE BAND: Still aLive And Rockin’ It at The Gov – Interview 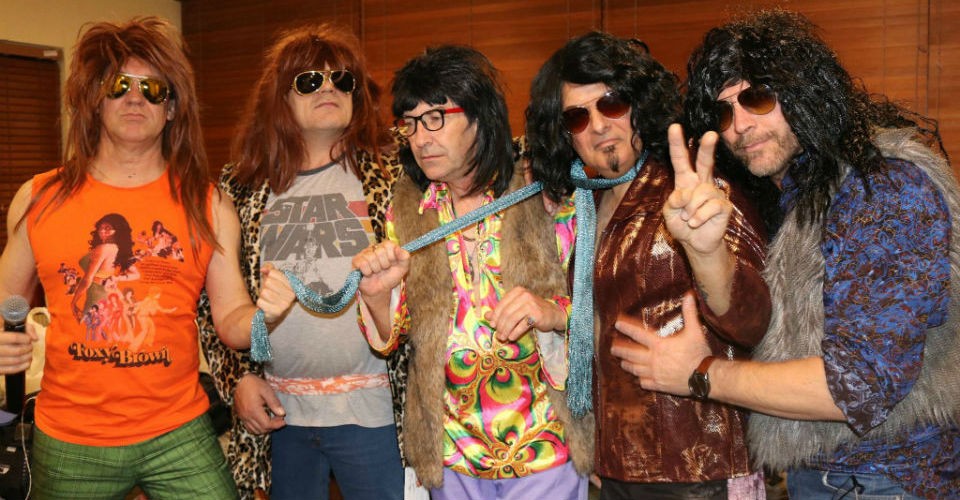 Deep in the 1970s, DEEP THROAT THE BAND were facing the dawning of global fame as the biggest and naughtiest band to come out of Australia when tragedy came from nowhere and saw the boys being ‘trapped’ in Molly Meldrum’s basement for 40 years. The boys disappeared from view and with them all of their hopes and dreams of worldwide musical success.

The door has been opened and the boys have emerged a little older but no less feisty for the musical glory that has sadly eluded them – until now! We tied down lead singer Rock Hardwood and got him to answer some hard-hitting questions in his own fabulous time.

Having been locked in Molly Meldrum’s basement for 40 years, many young people of today will know very little of you all. Please tell us about you and your bandmates.

“DEEP THROAT THE BAND is Dick Tingler on guitar, Hugh Jorgan III on drums, Wilbur Wang is our penist [sic], Leroy Thunderpants Jnr. our swimming pool cleaner and occasional bass player and myself – Rock Hardwood on lead throat,” he begins. “It’s very important that kids know their Oz Rock history and we are in fact starting a campaign to have rock music be included as a mandatory subject in the Australian Schools Curriculum. The fact is that if not for that unfortunate ‘accident’ we would have been the biggest band in Oz in the 1970s.”

So, how did you come to be in DEEP THROAT THE BAND together?

“I met Hugh at a hippie commune at Carey Gully in the Adelaide Hills. Actually it was in the lock-up after another police raid on the property. Hugh knew Wilbur, who was running a shelter for homeless donkeys and Leroy was my pool cleaner. We found Dick in a music shop in Adelaide. He was a recorder player at the time, but we told him he’d get more action if he switched to guitar.”

And, how was it that you were locked in Molly’s basement?

“Nobody really knows what happened,” Rock says. “One minute we were poppin’ iggy’s with Iggy Pop and discussing the medicinal benefits of cannabis oil with iconic ‘70s stoner comedy trio Cheech, Chong & Olivia Newton-John, next minute we were trapped in Molly’s basement. We may not be the sharpest bulbs in the shed, but it’s fairly obvious there was a conspiracy to shut us out. We were being chased by Mushroom Records, but ‘cos they couldn’t find us, Gudinski signed some brats named Skyhooks instead.”

Why did no one send out a search party?

“Did you see Molly’s interview with the King Of England? Molly has friends in high places.”

What did you all do in there for those four decades – besides thousands of hours of rehearsals?

“Actually we only rehearsed for about an hour,” he says. “The rest of the time we watched episodes of Countdown and Number 96. Mainly Number 96, in fact I only watched Number 96 and I kept rewinding the scenes featuring Bev, Vera and Miss Hemingway. Hugh mainly liked the scenes with Dudley & Don.”

Now that the mystery of your disappearance is solved, how did you come to be released from the basement?

“Some old dude that lived in the house fell off a ladder while doing some home renovations or something. And in all the commotion we escaped. The funny thing is that the door to the basement wasn’t even locked.”

Having missed the chance to be signed with Gudinski, how does the band intend to take back that chance at global stardom that they so tragically missed out on?

“As Leroy so often used to say: ‘Shit or get out of the kitchen!’ although we had no clue what the fuck he was on about.” Rock says. “Anyhow, there’s this new thing called the interwebs. It’s all a bit Orwellian to me. Dick & Wilbur know a lot about it and they told me that it’s a place you can go to get naked pictures and balloons pop up telling you there’s an error and then you get a virus.

“They were trying to teach Hugh how to use it and kept telling him to click E…..just click E and the window will open up and he said it’s a fucking screen! Where’s the window?! And then they had a fight and smashed the screen. Wilbur told me that the interwebs will make us famous. Hugh reckons Wilbur’s full of shit and that if he tells him to google the search bar one more time he’s gonna’ Google his head in!”

With so much music from the ‘70s available to you, how does the band go about choosing songs for live performances?

“It’s a democratic process. Everyone in the band suggests a song idea. I nod my head pretending to listen to their ideas, then I pick the song I want to do and that’s the song we play.”

Are there any artists that are strictly off limits?

“Maureen McGovern had this song called The Morning After in the film The Poseidon Adventure. It was a movie about a doomed ocean liner. The song was so bad it won an Academy Award, and so Maureen had a crack at another Oscar-winning debacle, We May Never Love Like This Again, from The Towering Inferno. I think both songs went to Number 1, which just proves there is no accounting for taste and that the record buying public is basically clueless.

“I doubt that a song from any disaster movie will ever be a hit again,” Rock adds, “especially if it involves a doomed ocean liner.”

Are there any original songs from the basement being performed at The Gov?

“I may be speaking out of tongue, but… yes… we did write some songs in the basement. We will introduce those original songs in to our shows very soon. It’s overwhelming enough for our loyal fans to see us back up there again. We don’t want to completely blow their minds with new songs. But rest assured it will be worth the wait.”

If there was one song from the ‘70s that you wish you wrote, what would it be and why?

“It’s a tough call and probably a toss-up between Debbie Boone’s You Light Up My Life or Captain & Tennille’s Muskrat Love,” Rock says. “In fact, the more I think about it, I wish I’d written The Morning After andWe May Never Love Like This Again.”

Is there anything else that you would like to share with us about DEEP THROAT THE BAND?

Where to from here for the band?

“We’re heading straight to The Gov. We want to give ourselves plenty of time to set up and because Leroy told me that you can catch more flies with honey than a stick. I really have no idea what that means; I actually have no fucking clue what he is on about most of the time.”

Book at thegov.com.au and OzTix. Click HERE to purchase your tickets.

Click HERE for your chance to win one of five double passes to see Deep Throat The Band at The Gov on Fri 13 Oct.