Dirty Dancing – The Classic Story On Stage Comes To The Adelaide Festival Theatre With All The Songs, Dance Moves And Characters That You Know And Love – Interview 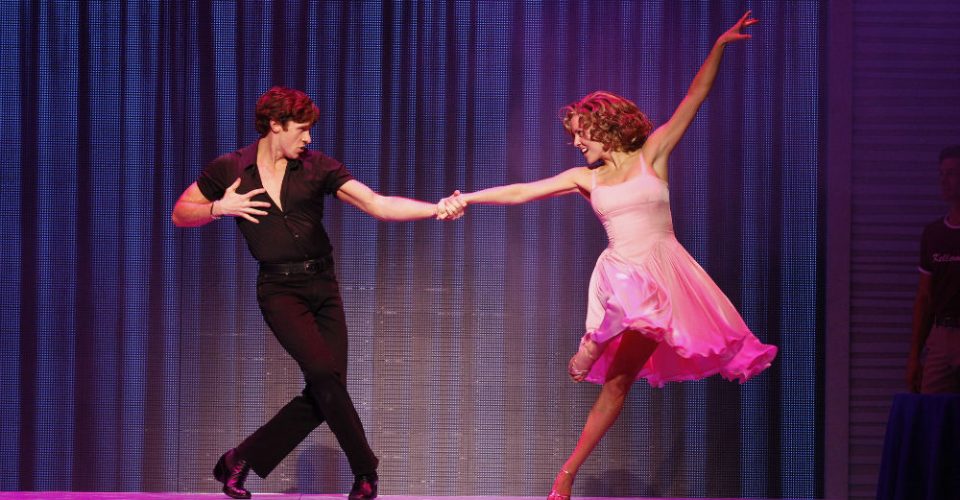 Written by Eleanor Bergstein and starring Patrick Swayze and Jennifer Grey, Dirty Dancing is the 1987 low budget romantic drama that became a box office smash hit. Set in the summer of 1963, the story follows Frances “Baby” Houseman as she meets and falls in love with Kellerman’s Resort’s dance instructor, Johnny Castle. The film and its multi-award winning soundtrack led to the 2004 Dirty Dancing: Havana Nights and the stage version that has enjoyed sell-out performances across Europe, North America and Australia.

Filled with all the music and passion of the movie, Dirty Dancing makes its Adelaide debut in October, and stars Kirby Burgess and Kurt Phelan. We speak with Kirby about many of the funny moments in the film; especially where Baby rolls her eyes at herself for saying ‘I carried a watermelon’ to Johnny.

“Not only do I get to say that line but I also get to carry a watermelon – which is great,” she laughs.

Have you ever dropped it?

“No, but in the original stage show they used real watermelons. My partner originated the role of Johnny’s cousin Billy – the original watermelon carrier. In one show he dropped them and all the dancers had to come on and dance in slushy watermelon. After that they decided to make props.”

Rumour has it that Patrick Swayze and Jennifer Grey did not get along with each other during filming.

“It’s true,” Kirby says. “I think Jennifer was desperately in love with him but he was very much in love with his partner. Jennifer was probably a little bit heartbroken that he didn’t drop everything for her, so there was some tension between them.

In the ‘tickle’ scene during Hungry Eyes, all of that laughing was actually Jennifer – not a scripted thing. Patrick was getting frustrated with her because they had been filming all day and he was tired. He was actually telling her to get it together so everyone could go home. The director kept the cameras rolling and showed them the chemistry between them and that they could make this work. It was then that they realised they were good together and had to pull their heads in and get the job done. Obviously the tension paid off.”

Kirby performs the role of Baby. There were probably few girls who wouldn’t love to have been Jennifer Grey during the dance and love scenes with Patrick Swayze.

“That’s what’s so appealing about her character; people – boy or girl – can relate to her because they’ve been in her shoes. We’ve all had a first love, a first crush, and that intensity of needing to be in the same room as them when they look at you or slightly touch you it means the world to you. Then you get that lump in your throat and you say silly things like ‘I carried a watermelon’ and embarrass yourself – which Baby does – but she is so kind-hearted and just wants the best for the world; she’s a really lovely character to play.”

Kirby tells us that she was a definite fan of the movie as a child.

“I found it in the video drawer at home and originally thought it was a naughty movie with a title like Dirty Dancing, so I did what any seven-year-old would do and I watched it when my parents weren’t home. Then I discovered it wasn’t so naughty, but a love story that I have continued to be obsessed with my whole life.

“When auditions were open, everyone started watching the film – as you do – but I didn’t because I wanted to make my version of Baby from my memory of the naive seventeen-year-old and not copy Jennifer Grey’s performance.”

How well has the movie translated to the stage?

“This show is quite unique in the fact that Eleanor Bergstein wrote the movie and the stage show, and has kept the story as close to the original as possible,” Kirby explains. “It’s basically the film on stage; you get the same experience, the same scenes and the same lines but with a few extra themes added to flesh out the characters and the story to be able to comment on the cultural text and political views of that time in America. Everything you know and loved in the film you will see on stage – lines like ‘I carried a watermelon’ and ‘Nobody puts Baby in the corner’.”

There was no singing in the movie, so is there any on stage?

“That’s another one of the unique experiences of this show, although it’s technically a musical, Kurt and I as the leads don’t sing,” she says. “We have singers in the show that act as the soundtrack. There are musical moments where they burst into song, but a lot of the time they are in the band at Kellerman’s and the dining room, or singing in the band for all the staff when they are dancing to Do You Love Me? and all the other Dirty Dancing moments. To me, the soundtrack is the biggest celebrity of the whole show because it creates trigger moments for the audience when a song like Hungry Eyes starts; people remember the moments of the movie because of the music.”

Patrick Swayze and Jennifer Grey are big shoes to fill. How have people taken to this stage version?

“Massive shoes and, as an actor you want to respect what was done before you without copying, so we’ve had to find that fine line of giving the audience what they know and love, but also your own version of it. So we’re tip-toeing that line but I think we’ve done it well. The stage show is so close to the film that some have said that they love it even more; the new dimension added to the stage characters has created a fresh element to the story.”

The lift during the (I’ve Had) The Time Of MyLife dance scene is another memorable moment in the film.

“For Kurt and me it is probably the most stressful moment in the show,” Kirby says. “It’s the most important part, everyone knows it is coming and you’ve got to hit it right. It’s our job to make it look easy but it’s a really hard lift to do. In the theatre we have to step it up a notch so we hold it and then rotate it; we hold it for a very long time. My dress is quite slippery, I have two mic packs inside my wig and Kurt and I have just done a seven-minute dance prior… everything is happening and then we reach the most important moment in the show. It’s a high pressure moment but it definitely pays off when the audience cheers in excitement.”

How do you keep it exciting for both of you after your 250 performances so far?

“Every show is different because every audience is different,” Kirby says. “We want you to cheer, scream, yell, cry and laugh as you go on that journey with us. When we have an audience that just loves every second, we want to be the best for them and tell the story to them. That’s why we do this; that’s why we injure every single part of our bodies as we lose hair from pinning in wigs, do countless costume changes and lifts, so many times I have to cry just to make other people happy… for me, that’s what helps me get out there every night – eight times a week!

“The tour is finishing up in Adelaide so we’re really looking forward to having great audiences to send us out for the year. This is probably the corniest thing I could possibly say but you will have the time of your life. People joke about it and Tweet about it, but it’s true; it’s a party musical and is such a fun night out and we want to share it with everyone – because we love it!”

Click HERE for your chance to win one of two double passes to see Dirty Dancing on Thu 8 Oct.