Dom Mariani: Who Says You Can’t Turn The Clock Back? – Interview 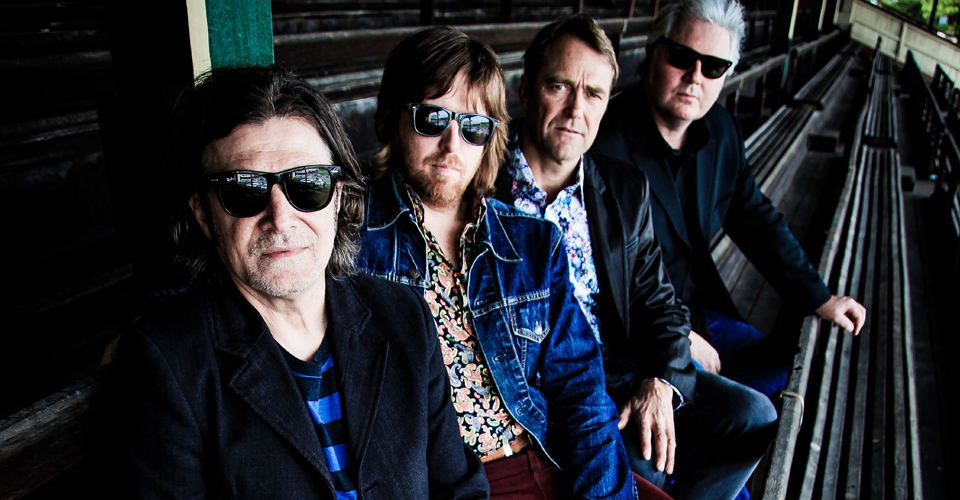 The Stems have kicked off a seven-date national tour, to celebrate the 30th anniversary of the release of their classic debut album, At First Sight, Violets Are Blue. Back in the day, The Stems epitomised ‘80s indie rock, and are one of only a handful of bands that cracked the mainstream charts of the ‘80s with an indie approach. The Clothesline catches up with singer/guitarist and founder member Dom Mariani and asks how the rehearsals went.

“Really good, actually,” Dom begins. “We kicked off some rehearsal in Perth, with Davey [Lane, You Am I], because Ashley [Naylor, Even] couldn’t make the first few gigs. We’ve reconvened here in Melbourne and Ashley has been along for those. It came together pretty quickly, actually. The band is well-rehearsed; Ash has been with us since 2010 so he knew the tunes. It’s just a matter of fitting in with Davey because he’s singing a couple of tunes, and playing a couple of songs that Ashley hasn’t done before.”

How did the first couple of shows over in Western Australia go down?

“Really good. We started off down at Margaret River, just south of Perth, and we did another in Fremantle. The Fremantle show, especially, was well attended; we really went down well.”

“Perth is our home town, we’ve established ourselves pretty well there,” Dom explains. “The faithful come down but we’re getting a lot of new fans coming along as well. We’re a fairly well known name in Perth but we also do quite well across the country. It’s great that a band from 30 years ago can come back out and do gigs and get a fairly decent crowd coming along and enjoying the music.”

How did this tour come about?

“We talked about it last year. We did a show as part of the Fremantle Festival and the promoter approached us and said we should do it again. There will always be a regular crowd so it could be an annual event as a part of the festival. We said we’d think about it. Next year will be the 30th anniversary of the debut album’s release so we thought that could be a good thing to do.”

The Stems are mentioned alongside bands like Hoodoo Gurus, The Saints, Sunnyboys and The Triffids. Some of those guys are also still playing national tours and festivals. Some have reformed, some have never stopped playing. Are you surprised at the number of people that want to see these bands?

“It does surprise me actually,” Dom says. “I guess guys like The Gurus have been playing from the time they started; they are one of Australia’s biggest bands. It’s nice to be placed alongside those sorts of bands. We’ve done gigs with The Gurus before; things like the Dig It Up Festival. Sunnyboys have come back and asked us to play; that’s been really rewarding. They are one of my favourite bands; they had an influence on me pursuing that kind of music. It was real thrill to get the call asking us to do a couple of shows on the east coast. It was the same with The Gurus, when they asked us to play. I would never have thought that 30 years after that album came out that I would still be playing in the same band. It’s just one of those things that, for a musician, is kind of a reward for putting all that effort into writing the tunes, and playing the circuit back then.”

When was the last time you played in Adelaide?

“Good question. I think it was the Dig It Up Festival, in 2007. We came across with The Gurus and Radio Birdman. It was at The Gov.”

Do you have any plans to tour Europe again, either with The Stems or with one of your other bands?

“The Stems are looking at some stuff in April next year. Mainly Spain and the UK with some places in between. Probably for three or four weeks. Any longer than that and it gets a bit difficult.”

You appear to be keeping busy with The Majestic Kelp, DM3 and your other projects. Is it fun?

“Absolutely. I love it. The Stems was my one thing in the late-Eighties and that morphed into another thing, you know, the Someloves album, and then it just sort of kept going. I went back to a day job situation.

“The music was first and foremost for me,” Dom continues. “I wanted to make good music. I started to question whether I wanted to go out and make a profession out of music, because it’s pretty hard. I could see what was going on with some of the other bands in this country and I was thinking that there was a limitation to that, unless you really break out overseas. You can get stuck doing the one thing, unless you keep reinventing yourself and writing really good material all the time, there’s going to be a period where you are just treading the boards. So for me, as a music lover, I just wanted to try all of these different things.

So it is the love of the music that has kept you going?

“I’ve managed to do some overseas touring, managing my day job at the same time,” Dom says. “Using holidays to do a six week tour of Europe, to go to the USA and to Japan. Through that I have kept the profile alive, in Europe especially. That’s where The Stems broke through. It kept me out there; I had some releases in Europe and the US, on smaller labels. I’ve really enjoyed it at that level; it’s about the music, and you get to do some really cool things. The money is just enough to cover recording costs, the travel, and get you some food while you are there. I’m really happy to do that; it keeps me writing and it’s much more about the music part of it.

“It’s my first love. I love my day job too – it’s architectural work so they are both creative but as a young kid, as a rock ‘n’ roll fan, it’s kept me challenged and happy in life. The bands that I have are good little bands and we put out some pretty good stuff. I didn’t see myself having to join bands that were just doing cover versions for the sake of making a few bucks to pay the rent. I think that’s soul destroying; it starts to water down the whole idea of playing music, enjoying music. I do enjoy playing other people’s songs but I wouldn’t want to go out every night and do the same old stuff to people who really don’t care.”