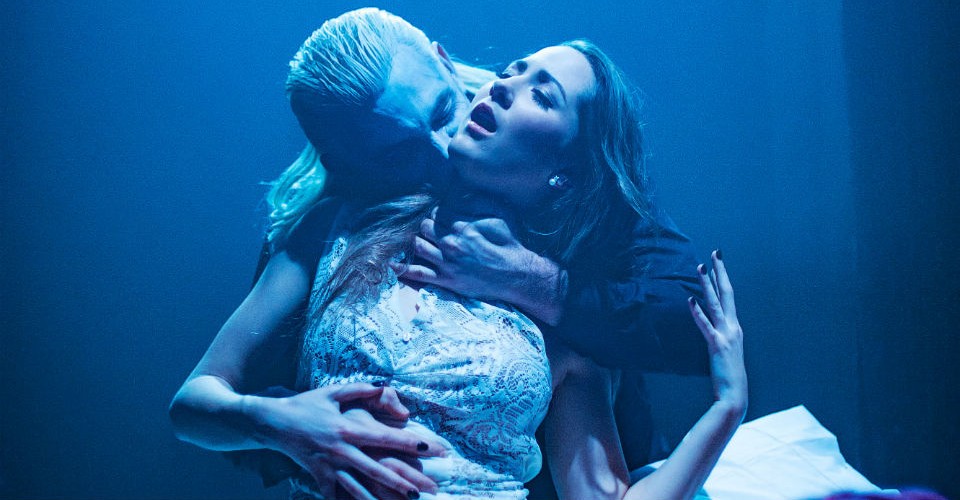 Dracula is back from the dead and sweeping on to the Adelaide stage courtesy of shake & stir, one of Australia’s leading contemporary theatre companies. Dracula, Bram Stoker’s gothic masterpiece, will be staged at the Space Theatre, Adelaide Festival Centre. The storyline will be familiar to many – when young lawyer Jonathan Harker visits Castle Dracula, he soon discovers that his host wants more than just his company. Leaving Jonathan for dead, Dracula embarks on a journey to London to seek out true love, seduction and blood.

Adelaide and the Barossa see the final leg of their country-wide season of Dracula after touring since February. We speak with actor and co-adapter Nick Skubij.

“We’ve been to the Barossa before, but never to Adelaide so this is our first time bringing one of our shows into that city, which is really exciting for us,” he says. “I think Dracula is a really good first one for Adelaide audiences as well. It’s a massive show with huge production values which will really showcase what this company’s about and give people a great introduction into the work we do.

“We started in 2006 and began our lives as a company that really focussed heavily on students and creating dynamic engaging theatre for young people. We toured into schools – and still do. We have a massive schools program with 600-700 performances a year that are performed in schools all along the East Coast and to about 180,000 young people. All of these shows are targeted at high school-aged kids to get them loving and involved in theatre.

“Also, in the past six years we have developed our touring and Main Stage work that we do,” Nick says. “So in addition to the school and young people work that we do, we do a whole range of shows that tour into major theatres all across the country for the general public. Many of them are adapted classic works – such as Dracula, 1984, Animal Farm, Wuthering Heights – those types of things.”

So, you do all the really light-hearted productions, then?

“Yes, all the joyous romps!” he laughs. “The thing is that we really love stories and classic tales that lend themselves to theatricality. There is a lot of effort put in by our team of designers to create the world for these stories. Wuthering Heights, for example, had rain on stage and wind whipping through the audience. In Dracula we are trying to create this environment of Transylvania and starkly contrasting with London. So much a part of those novels that people love is imagining the world and we work really hard to create that world on stage – so it becomes a character in itself.

You look very convincing in your role as Dracula.

“Yes, I’m a blond Dracula as opposed to your typical widows-peaked, slicked-back, sleazy black-haired Dracula [laughs]. Hopefully it’s a bit of a contemporary take on the character.”

Dracula looks great as a gothic-blond.

“I was blond at the time when we were creating Dracula and doing make-up trials for the character to create the physical design for what the face would look like, and I guess it just stuck,” Nick says. “There was something quite other-worldly about this character being a platinum blond; it stands out from quite a dark-toned cast and quite a dark world. He’s definitely the outsider so we can give him a new version of what that typical shock-horror version that Dracula has always been. He’s more of a romantic younger Twlight version of the character.

“The work we do, they’re really faithful adaptations so it’s very much Bram Stoker’s novel on stage,” he says of their adaptation of this classic horror story. “We don’t bugger around with the text or try to re-contextualise it into some clever 2018 setting. Our aim is not to make it modern but to make it feel timeless, yet fresh as well as familiar.

“Audiences that come to our shows that come as young people who are fresh to the story having not read it or know what it’s about, but we also get really loyal people who are obsessed with the Dracula novel, know all about the vampire folk law, the story and the characters. These people are experts one the story, so for them we need to show them something they haven’t seen before, but still make them feel that they are in familiar territory and they’re getting the story that they know and love.

“We contemporise the play by the use of costumes, technology and how we present the sets, but we do stay faithful to the characters and to the integrity of the author who created the work. We’re not there to reinvent it, but to give it love, dust it off and make it fresh and vibrant again – which is really exciting.”

Dracula will be performed at the Adelaide Festival Centre’s intimate Space Theatre.

“Those venues, like The Space, that seats around 300 people, the show works so beautifully where the audiences are really close so that we can kind of cloak them with the production and really draw them in. It becomes quite the immersive theatre experience.

“The physical production that we tour with is going to be massive in that venue – almost to the point of the production team making it as a bit of a challenge to fit the show into,” Nick says. “But, it also means that the audience could walk in having never seen anything like this scale of show in that space before. The set becomes as enjoyed a part of the production as the performances on stage. As actors, we certainly don’t compete with the set, but it’s a well-integrated and clever set design which I can’t wait for people in Adelaide to see.”

Of course, there will be lots of blood!

“Oh, there’s so much blood. Blood galore!” he enthuses. “It’s not gory or gratuitous, but blood is necessary – being Dracula. There’s heaps of bloody, and plenty of old-school, theatre shocks and frights that really play up to creating a squeal or two from the audience every now and then. That is mixed in with a lot of technology, automatic staging, the lighting design is so clever and sumptuous, rich and big. There are a lot of cool elements in this show.”

And no production of Dracula would be complete without dramatic music!

“We work with a great sound designer. Guy Webster scores our shows a little bit filmically [sic]; there’s never a quiet moment in this show – there’s always something that is sitting underneath the scenes that helps us guide through the spaces,” Nick says. “There’s a weather feel to it with the wind and the storms and the shocks and the bangs… and then there are some great Game Of Thrones-style chase and battle music that comes in there too.

“It’s a really great escapist night at the theatre where you can just sit back and lose yourself in it and just the fast-paced, one-act, ninety minutes of no bullshit kind of thing that audiences can get onto in the beginning and not let go of until the end.

“I love this show so much – and you don’t always get to say that about a show,” Nick says. “You always have to say it [laughs] but sometimes you actually mean it. We’ve been seven months on the road, with Adelaide being our second to last stop before we are done. The cast are so excited to be meeting up again in Adelaide. When you get a really great cohesive company doing a show that you really love, you could talk about it for hours. It will be sad when it closes, actually.”