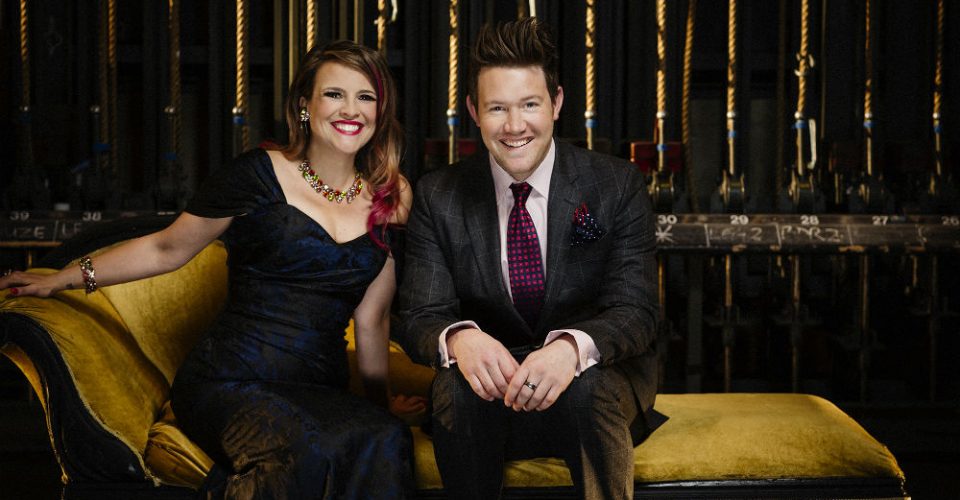 In 2015, Barry Humphries put the ‘F’ back into Festival and this year’s Adelaide Cabaret Festival co-Artistic Directors Eddie Perfect and Ali McGregor delve into ‘not what cabaret is but what it could be… bringing us an outstanding program of artists for the festival’s 16th year exploring ‘What Comes Next’.

We speak with cabaret performer and writer Eddie Perfect about this year’s season, which kicks off on the Queen’s Birthday long weekend, and begin by discussing some of the musical comedy appearing the festival.

“Obviously the Cabaret Festival has had a lot of comedy shows in the past, but what’s interesting about this program, we think, is that comedy is being deployed in really interesting ways. Frank Woodley has written a show called The Composer Is Dead. It’s a musical whodunit which he is doing in collaboration with the Adelaide Symphony Orchestra, and is part of our conscious plan to make sure that we have stuff for kids to do during the Festival.

“Frank’s show is about opening up the orchestra and seeing all their different parts and turning it in to something extremely funny and filled with great comic clowning,” he says. “All of the other comedy acts are all musical, like Tripod and Sammy J, although we’re sure whether Cabaret audiences know them that well, so that’s going to be really interesting.

“One of the things that Ali and I always thought was to go see shows and see if the content and the experience of them would be something that our children could enjoy. But because they are on at later at night, our kids couldn’t come along. So, that’s why we decided to have a Family Gala so the acts that are performing in the Festival that are appropriate for kids can be on, and children could have the Red Carpet experience.”

As parents, it’s great that you and Ali have opened cabaret up for kids. It’s that piece of each of you that you are bringing to the Festival.

“That’s definitely one aspect of it,” Eddie says. “I have a pre-occupation with revitalising how people look at cabaret. The distance between performer and artist having an idea and then executing it on stage is very quick in cabaret. It’s the same with stand-up comedy; you can conceive of an idea or joke in one minute, and be on stage in the next communicating that joke. There’s nothing in the way. It’s not like a musical where there are sets and costumes, lights and technical rehearsal runs. With cabaret you can respond to the world very quickly.

“I feel like cabaret, in the past, has been about replicating the prohibition era, speakeasies, Weimar room, guys in white hats and suits… All of that stuff has its place but it doesn’t feel like it is reflecting what is happening in cabaret now. There are artists performing all over the world who are not just trying to emanate the past but are using the art to tell an immediate story. If you are in Weimar Germany, that would feel very immediate as well. But instead of turning that into a museum piece, we want to take the spirit of Weimar and bring it in to the present.

“We’re not trying to smash anyone’s cabaret dreams but we are trying to move away from that retro image that comes with the perception of cabaret,” he says. “Both Ali and I work in cabaret, as do many artists that we know. It’s the slightly indefinable nature of cabaret that makes it exciting, especially in the way that people can twist it into their own particular artistic world view.

“As a genre, I would say that cabaret has to have music – its musical storytelling on some level. That’s really the beginning and end of it.

So, how do you and Ali work together as Artistic Directors? It’s nice to note that she is also performing in the Festival.

“Ali and I went on a trip around the world so see cabaret performers, which was so amazing…”

That would have been so hard!

“Yeah, I know!” he agrees, pretending to moan. “Sorry, honey, I’ve got to go to work – to Edinburgh, London and New York… [laughs]. One thing we did do was perform at Joe’s Pub in New York with a bunch NY-based artists that have performed here are previous festivals. Ali absolutely wiped the floor with her gig; she smashed it. There was a last minute drop-out in the program, and we were all saying ‘Can you please do your show?” So, it was all our idea.”

The Cabaret Festival now has movie nights, which is a first.

“Basically, we didn’t want anyone to have a dark night at the festival from working around the clock,” Eddie says. “We’ve got Lisa Fischer – who is performing, obviously – but she was featured in a documentary called 20 Feet From Stardom. It’s an amazing story about the history of backing singers and what it takes to de one. It features artists like Joe Cocker and Rolling Stones, and she is one of the featured singers. Lisa will be introducing that documentary, so it will be really great to get her take on that.”

Tell us some of your favourite artists performing this year.

“I’m really excited about Tripod bringing their show This Gaming Life here,” he enthuses. “It’s in collaboration with Austin Wintory who is a huge composer for [console] games. His latest score was for Assassin’s Creed. In fact, he got them to write a whole lot of murder ballads for Assassin’s Creed. Austin is coming over to conduct the Adelaide Symphony Orchestra in this show which is all about Tripod’s relationship with gaming.

“The incredible thing about it is that apart from Tripod fans and people that love music and the experience of the orchestra, this show is really tapped into an amazing audience of people who have gaming as part of their life. Tripod have a brilliant way of talking about gaming and how it parallels with their own lives, with their loves and losses, and you don’t have to be into gaming to enjoy it. The music is brilliant – as is the orchestra – and they’re very funny, so I’m definitely excited about that.

“We saw Miss Behave’s Gameshow in Edinburgh,” Eddie says. “The show is brilliant in the way she divides the audience in half between those with iPhones and those with other types of phones. It’s completely immersive and interactive, and it’s so much fun. I think it is really going to attract a younger audience that are happy to get a little crazy and game. I am definitely no one for audience participation – I can tell you that right now. But this show is irresistible.

“The other show I have to mention is like my ‘Captain’s Pick’. Sometimes there are artists that nobody else knows, but it’s impractical to get everyone involved in the festival to see them; they’re either not performing or they’re touring in places where everyone isn’t, so it’s really hard. We all knew of the other performers and were able to see their show, but Hue Blanes is my pick. I just said to everyone ‘I don’t care. Shut up. I’m putting him in the festival’, he laughs. They’re all like ‘Oh, okay’. I had negotiated everyone else but there were no negotiations on this one. Hue is one of the most interesting singer songwriters I’ve heard. He’s a brilliant piano player, brilliant singer with really strange and interesting songs. He is going to be killer in this festival.”

This is the beginning of two years working at the Cabaret Festival. Are you enjoying it?

“How could you not? I’m spending my days going around, watching shows and talking to artists about what they want to do. It’s great.”

Book at BASS on 131 246 and bass.net.au. For more information, to view the online program and book your tickets, click HERE or head to www.adelaidecabaretfestival.com.au.