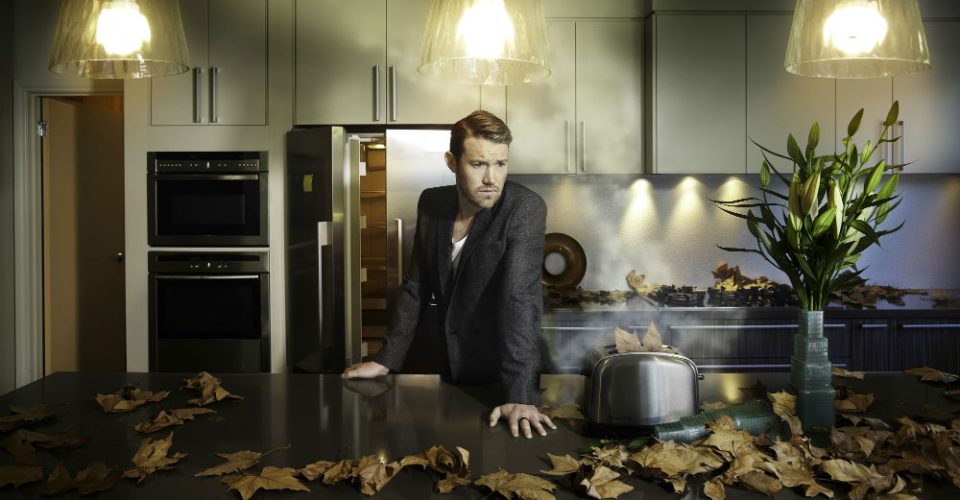 Eddie Perfect is one of Australia’s most prolific comedy and musical theatre writers and composers. His performances include Shane Warne The Musical; Keating! The Musical; Drink Pepsi, Bitch; and Misanthropology. At age 37, Eddie has added author, classical and jazz musician as well as actor on the stage and screen [Offspring] to his skill-set, as well as father and now Play School performer.

Returning to the Adelaide Cabaret Festival to perform with composer Iain Grandage and members of the Australian National Academy of Music [ANAM], Eddie brings with him what he calls ‘funny sad’ stories of love, leaving, binge-drinking, coming of age and mind-numbing normalcy from his youth in middle-class Mentone, Victoria, with Songs From The Middle.

Eddie is at home when we speak about his 2014 Cabaret Festival show Australian Songs that he performed with comedy music trio Tripod. Yon, from Tripod, was also performing his solo show Man Daddy.

“That show is reputedly the reason that caused Barry Humphries to come out and say that Cabaret artists weren’t allowed to say ‘fuck’!” Eddie begins. “He really freaked everyone out with that show – which was great. I totally give Simon (Yon) credit for that!”

Eddie tells us that Songs From The Middle is somewhat about his life, it’s more about the suburb of Mentone, that he grew up in.

“About five years ago, Matthew Hoy from ANAM rang me to say that they were bringing The Brodsky Quartet to Australia. They’re an internationally famous string quartet, but I knew them because of the crossover contemporary stuff that they had done, having worked on The Juliet Letters with Elvis Costello. My little sister had Björk’s Post album which had a bonus CD; The Brodsky Quartet played a string version of Hyperballad. It was amazing and just gorgeous so I was happy to do something with them.

“Matthew’s idea was to reorchestrate a whole bunch of my pre-existing material with classical musicians,” he says. “But I thought that would be a wasted opportunity and wanted to write a whole new show – which was ridiculously ambitious, but it’s what I wanted to do. I had the idea of writing about Mentone but, in my mind at least, it was kind of a strange thing to do. Yet there was something about working with The Brodsky Quartet that seemed to legitimise it. I’ve always liked smashing the sublime against the ridiculous so, although I didn’t know what I wanted to say about my hometown, I knew I wanted to go back, mentally, to look at it, turn over some stones, see what memories popped out and writes some songs about it.

“Once all the songs came along, the piece became more about the relationship I had with the suburb I grew up in but didn’t like very much – not because it was bad but because it was insufferably nice and white and middle-class and beige and where none of the things that I was interested in, culturally, seemed to have any currency there. I couldn’t wait to get out of there and live a bohemian artist existence and find my ‘people’ that just didn’t exist in Mentone.

“So, Songs From The Middle is about why some people belong and why others don’t, why we choose to live in the places we choose to live in, and to kind of make peace with the fact I didn’t find it to be a very creative place and therefore dismissed the importance people’s lives. In my twenties I was running Mentone down and have always felt guilty about that because, as I came to have kids of my own, I realised that people’s lives matter; the amazing, interesting heart-breaking stories of love and loss, success and failure, tragedy, wonder and bizarreness. These things happened in all places – Mentone included. Everyone has to come from somewhere, and I wanted to try to find the poetry and romance in the ordinariness that I saw in Mentone.”

You seem to be constantly writing new songs and new shows. Is this something that comes easy for you? 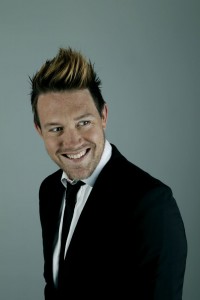 “Most writers don’t want to write too much,” Eddie says. “Once you write something you like, you kind of want to get as much mileage out of it as possible. For whatever reason, every time that I wrote a show, I found myself having to go back and write more for another show because the songs I write are either topical or about the current events of the time – which may not have any validity in twelve months or two years’time. For that reason I would need to generate more material because the politics had changed or the issue or person had gone away. It’s also because I wrote stuff that I didn’t feel like I wanted to sing them anymore.

“For me, the need to write has always been about having something to say; once I had said it, I didn’t want to say it anymore, so I needed to go and write more stuff that I felt had a bit more of a current charge to allow the performance to be more dynamic. In a way, I would have had to written a hit show and toured it around the world, singing the same songs over and over again, but it didn’t work out that way. It maybe wasn’t to the benefit of my bank balance but it was certainly to the benefit of my craft, because I know that I’d I sit at my piano with an idea that I’m going to have a song within a day; I know that I can do that now, and so I don’t stress about not having the ability to write songs – if I put in the time, they will come out.

What do your two children think about you being on Play School?

“My little one, who is three, she doesn’t seem to be too fussed about it,” Eddie says. “My almost six-year-old says she’s a bit old for it now, but she’s still secretly into it. She’s worked out that it carries a bit of currency among her friends. The other day, there was a school walkathon. Everyone has to walk laps of the school to help raise money. It was really stressing her and she was scared about walking around the school on her own, with big kids everywhere, so I told her I would walk with her.

And what do you think about being on Play School?

“I absolutely love it!” he says. “I think it’s such a gift. I’ve always wanted to do it; always felt I had the skill set to do it but, more than that, I had a real desire to do it because I loved Play School as a kid, it’s an iconic show and, statistically, it reaches something like eighty percent of Australian kids, so you get to be a part of a whole generation of kids childhoods. It’s wonderful.”

Have you worked with composer and conductor Iain Grandage before?

“We first worked together in 2003 at the Malthouse Theatre doing a production of Babes In The Wood,” Eddie says. “It was meant to be a ‘Back of Burke’ bush panto where this outback town pitch a tent and put on this pantomime but it was more about the cracks that appeared in the people as they performed; it was a very weird piece. Iain wrote the music and played the piano live on stage with an upright piano and scored the whole thing live, which was lovely.

“Iain straddles a lot of worlds; classical cellist, has had a long association with the Australian Symphony Orchestra, he’s a classical composer, has written operas, ballets and contemporary dance music, he works with Meow Meow and worked on The Secret River. He’s one of those guys who speaks a lot of musical and theatrical languages and is a brilliant orchestrator.

“We’ve worked together on this show from the start,” he adds. “When we first got together, I told him what the idea was and we just played music for each other. He brought along a book of Gregory Crewdson photographs, which are all very elaborately set up, well-lit still shots of night time suburbia. There were photos of people getting out of their cars in the driveway behind their white picket fences, holding the shopping and looking into their houses with something happening inside, all with a sense of everything is perfect but there’s something a little bit wrong and they didn’t want to go in there. They were all about the moments in between.

“I came to realise that sensibility of things looking idyllic and perfect, but with stuff bubbling underneath all the time – which is very much my experience with Mentone. So, we wanted to create, sonically, something that conveyed a similar idea. Even though I wrote the individual songs, Iain really got in and orchestrated them, put incidental music in there and moved melodic themes from some songs into other pieces. The whole thing kind of goes together like a strange dream of something beautiful but a bit twisted. It was a really amazing collaborative process.”

“We also performed at the Sydney Opera House and Brisbane Powerhouse, but we only had The Brodsky Quartet for a week… and after that, it just went into a box,” Eddie says. “We did record it at the time, but it’s taken me those five years to get that bloody recording out and get it mixed and mastered.

“At the same time, Barry Humphries asked me if I had anything I would like to do at the Festival and I just thought Songs From The Middle was a really obvious choice because it not only suits my sensibilities, but it also suits Barry’s. It’s probably one of my most Barry-esque pieces; it’s taking a magnifying glass and looking at suburban life. And also because Barry is such a great lover of such a broad range of art forms, and this one of the most uniquely collaborative pieces I’ve done. Ten classical musicians on stage, Iain Grandage – who is such an orchestral and theatrical animal, and then you have my songs. It seemed like the perfect hybrid show to put in Barry’s Festival.

“It was also a great opportunity to make the CD available and launch it by doing a full concert.”