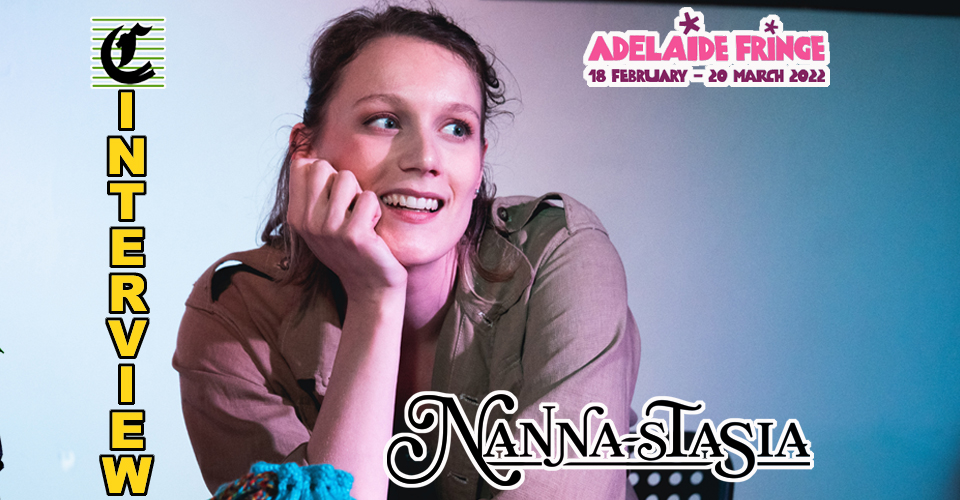 Eleanor Stankiewicz has been a regular visitor to Adelaide both in the Fringe and with State Theatre Company of SA. This year she is bringing a play based on the children’s film Anastasia, but also the personal story of her Nanna, a Lithuanian refugee who came to Australia after surviving World War II. We contact Eleanor to explore the connection between her Nanna and a children’s animated movie:

Nanna-stasia is listed as Comedy, and the title sounds like a comedy show, but your Nanna’s story suggests there is more to the show than just the funny bits?

“It’s always a challenge to decide what part of the guide to choose for your show”, Eleanor says. “Nanna-stasia is a storytelling adventure, a one-woman musical, packed with jokes and physical comedy so we went with what felt right. We’ve had audiences laugh, cry, and everything in-between.”

You also enjoy improv comedy, but this show has a structured storyline?

“I do love improv comedy! This show is fully scripted though we used a lot of improv to build the show” , she says. The beauty of this being a one woman show that I have written is that I can be responsive to the audience and like to find moments of play in every performance. “

How long did it take you to write the Nanna-stasia?

“I had been dreaming of doing a show similar to this for quite a few years,” Eleanor says. “I remember sitting outside of the Wine Centre during Adelaide Fringe 2019, enjoying being in the thick of it all and finally deciding to write the show. All up, it took me about three weeks to write and rehearse the show for the first season later that year.”

The Anastasia film was aimed at children. Is your show suitable for all ages?

“This show is suitable for ages 12 up (with parental guidance). The show discusses themes that are best unpacked with an adult. It is not written for kids, but there are definitely themes that are relevant for young people. In Perth, we had families come with their kids (including grandparents and grandchildren). I found that audiences there with children ages 12 and up found the show helpful as a conversation starter.

“If you’re a fan of the animated movie from 1997 this is a must-see,” she says. “Grandparents and parents also love the show because it celebrates their stories and passing them along.”

This show has already won the NIDA Writer Award at the Sydney Fringe in 2019, and Perth’s Fringeworld Tour Ready Award. You must be more than ready to take the show on the road again?

“We’ve had to wake the show up after sitting on the shelf since the start of 2020. It’s been a joy to rediscover it and remember how much fun it was to perform. It is really wonderful being able to bring this show home and who knows what the future might hold, hopefully many more bright opportunities. I tour with other companies quite a lot, so being able to travel and perform my own work is definitely one of my favourite things to do!”

This show is presented by Disco Turtle Productions, which is yourself and Marcel Blanch-de Wilt. So you are responsible for putting the shows together as well as writing the scripts and performing?

“Yes, Marcel and I are a two person operation,” Eleanor says. “We really enjoy making work together (which all started back in 2009 – during Adelaide Fringe, in fact!). The reality of the independent theatre maker is often being able to wear both the hat of a producer and creative.”

Both you and Marcel have a long association with the Fringe. What do you enjoy most about it?’

“My favourite thing about Adelaide Fringe is the community. The fringe and the artists are so incredible and I am pumped to be back in amongst the action after a couple of years away. There is also nothing quite like a summer in Adelaide running around the city trying to fit in as many shows in a night as possible. The city and the people come alive.”

You also have another show at Rhino Room with Marcel called The Newlyweds. What is this show about?

“The Newlyweds show is a fully improvised show,” Eleanor says. “Marcel and I will make up a new play every night based on a suggestion from the audience. Very silly and very fun. We’ve taken this show to Brisbane, Wellington, and Chicago so this will also be an Adelaide premiere.”

People may have seen you as Catherine in the STC production Neighbourhood Watch with Miriam Margolyes. You also appeared as Queenie in the play Honk, about an ugly duckling, so your interest in the theatre includes serious acting?

“I’m interested in all sorts of roles; whatever tells a good story,” she says. “In 2011, I moved to Sydney to study acting at NIDA and since graduating have been working as an actor. It is a job I am so thankful to have and am so happy that I get to spend my days telling stories and working with incredible people, like Miriam Margolyes (though, no one is truly like Miriam Margolyes, she is one of a kind!) “

Is there anything you’d like to add to encourage people to come along to Nanna-stasia ?

“Nanna-stasia is a show that is for everyone,” Eleanor concludes. “I made it as a tribute to the amazing life that my Nanna led and I am so excited to share it with Adelaide.”