eMotion Music Presents SWING – The Beat That Shook The World and MOJITO! – The Hemingway Cabaret at Adelaide Fringe 2018 – Interview 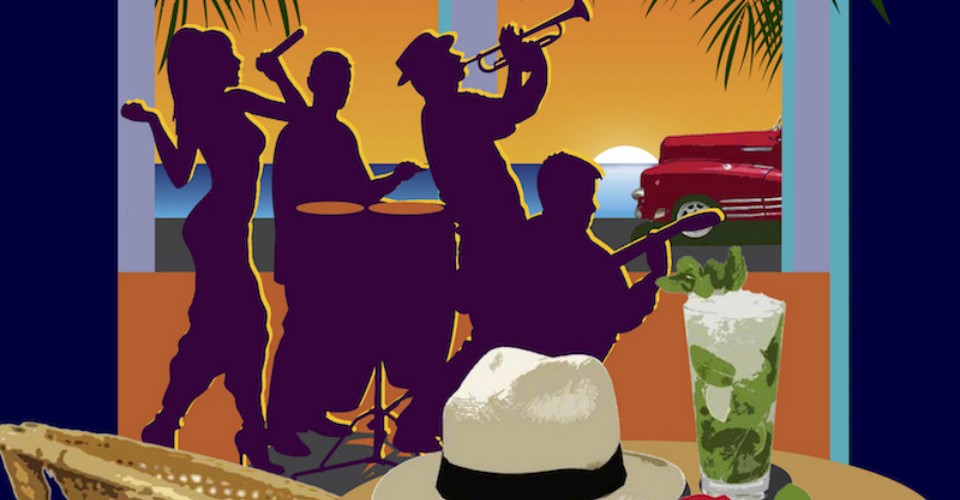 SWING – The Beat That Shook The World (5 stars, Advertiser, Adelaide Fringe 2016) and MOJITO! – The Hemingway Cabaret (5 stars, Advertiser, Adelaide Fringe 2017), are brilliantly entertaining shows bringing much more, respectively, than excellent Big Band Swing and Cuban Cool/Flamenco Fire, to the stage. Each is the brainchild of Adelaide-based producer and jazz pianist, Brendan Fitzgerald, in collaboration with Melbourne-based Steven Gration, former Artistic Director of Magpie Theatre Company in the ‘90s.

Brendan Fitzgerald and his outstanding quartet had a hit in the 2015 Adelaide Fringe with Take Five -The Dave Brubeck Story, an innovative and delightful show combining the exhilarating music of Dave Brubeck with narrative about the man and his career, back-dropped by captivating images from his life. Steven saw the Brubeck show in Melbourne, and was impressed by the value added to a musical piece by its theatrical content. When Brendan said he wanted to create a show about the Swing era, how it affected modern music and changed the socio-political stance of the time, Steven came on board and the pair created and produced SWING – The Beat That Shook The World.

In the mood of the era, the white tuxedoed seven-piece band plays the glorious tunes of the musicians and composers who changed the face of modern music; Louis Armstrong, Glen Miller and Duke Ellington, while featuring the songs of Billy Holiday, Ella Fitzgerald, Cab Calloway and more. A backdrop of compelling images brings to life the glory of the era and its famous musicians and also touches on the harsher side of that time. Steven Gration plays George T. Simon, renowned music critic from Metronome Magazine, who adds to the selections with his sardonic backstory about the musicians, their world and how they overcame the savage racism that still reigned.

Anita Wardell is returning from the UK to take up a position teaching singing at the Adelaide Conservatory of Music and to join some of Adelaide’s best jazz musicians in the cast of SWING. Anita is a joyful singer; a master of scat, whose thrilling vocal innovation and inspirational musicality captivates the listener. She grew up in Adelaide, studying music at Adelaide University, and cut her vocal teeth on the songs of the Swing era. With a string of awards to her name, (Best Jazz Vocalist at the British Jazz Awards 2013, BBC Jazz Award for Best of Jazz 2006), Anita is in her element with the songs of this era.

In the wake of two successful seasons of SWING, Brendan’s love of Latin music and his work with Afro-Cuban Band Ah Hum!, sparked an idea to showcase the intoxicating rhythms of Cuba, Spain and Latin America. Searching for an interesting character to embellish the music, Steven and Brendan discovered that Ernest ‘Papa” Hemingway had spent many years in Spain and Cuba during, and after, their respective civil war and revolution. He even went marlin fishing with Fidel Castro.

So MOJITO! – The Hemingway Cabaret was born, embodying all the hip coolness of Cuban music and the smouldering sensual fire of Flamenco and Latin beats. Set in La Bodeguita Del Medio, the Havana mojito bar that Hemingway frequented, the songs come thick and fast as the fantastic 7-piece Grupo Mojito propel three beautiful singers into a competition for Hemingway’s ‘best music performance’ prize.

Canadian born Nancy Ruth has a voice like liquid silk and a powerful stage presence that enchants her audience. She now lives in Malaga, Spain and travels the world singing and playing her own music, a scintillating mix of Flamenco and Latin, spiced with her love of Jazz. Renowned as a performer and recording artist, Nancy brings several of her original numbers to the score of MOJITO! playing the character, Rosa.

Cynthia Madrid (Chile) as Juanita and Diana Scalza as Novia complete the trio of female singers, with Pepe, the Mafioso owner of the club, played by Christian Cifuentes, adding to the mix with his own vocal contributions. Pepe is however, more interested in the favours of women than Hemingway (played by actor and writer, Andrew Le Roy, former Sydney radio personality now living in Adelaide).

This entertaining and informative combination of excellent music sprinkled with a touch of theatre has become the trademark of eMotion Music, Brendan Fitzgerald’s production company. If he and Steven Gration continue to turn out shows of the calibre of those we have seen so far, Australian and overseas audiences can look forward to hearing a lot more from this writing duo.

SWING – The Beat That Shook The World and MOJITO! – The Hemingway Cabaret are both showing during the 2018 Adelaide Fringe. MOJITO! is also travelling to Sydney for a season at Sutherland Entertainment Centre, following the Fringe. Anita Wardell and Nancy Ruth are also touring Australia during February, Anita performing with Michelle Nicole, Nancy presenting her own show, Sangria Jam.

SWING – The Beat That Shook The World performs at Brighton Theatre at Brighton Performing Arts Centre, 305 Brighton Road, at various times on Thu 15 Feb until Sun 18 Feb.
Book at FRINGEtix at adelaidefringe.com.au/fringetix. Click HERE to purchase your tickets.

MOJITO! – The Hemingway Cabaret performs at Top Of The Ark at Arkaba Hotel, 150 Glen Osmond Road, Fullerton, from 8pm on Wed 21 Feb until Sat 24 Feb.
Book at FRINGEtix at adelaidefringe.com.au/fringetix. Click HERE to purchase your tickets.

Please note: Discounts apply when booking both shows in the one transaction