ESCAPE: An Anthology Of Short Stories 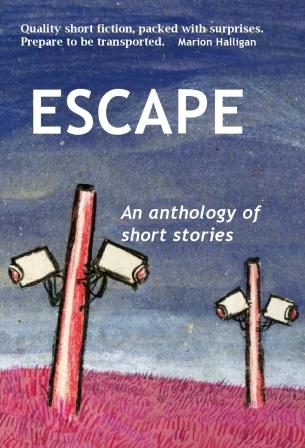 Sometimes a story can change your whole world. Words on a page can be so powerful that it seems like your eyes have a new colour or shape – the tale becomes a prism through which you see the world. Stories like that are often small. Ernest Hemingway is said to have written one of the smallest stories: For Sale. Baby Shoes. Never worn. Those six words tug at your heartstrings. Even their brevity says something – the pain of the shoes’ owner is too great for them (him? her?) to bother with more than those six words. Why write more words when those will do, and just breathing is hard work?

The stories in Escape were like that for me. I will never think of stories in the same way having read Ryan O’Neill’s My English Homework, an astoundingly clever, painfully heartbreaking but ultimately empowering story about a refugee. I could never doubt the power and flexibility of the English language having read Jon Steiner’s Poioumenon, a self-aware, absurdly hilarious study on David Foster Wallace and the much-reported death of irony. Josephine Rowe’s short but sadly-sweet Repairs is like Hemingway – a lot is imparted in just a few words, and small detail tells the tale.

There are 29 stories altogether, by stellar writers such as A.S. Patric, Andy Kissane and Jen Mills as well as others you might not know, but will be glad to have read.

There is no longer any argument: the short story is king. And if anyone doubts that, I will give them this collection and tell them to read. In it lies irrefutable proof that you don’t need a novel to be transported. You don’t need a poem to be moved. Short stories can do it all and more – and all on the commute to work.