Fawlty Towers – Live: John Cleese’s Stage Adaptation comes to Her Majesty’s Theatre. And, Whatever You Do… Don’t Mention The War – Interview 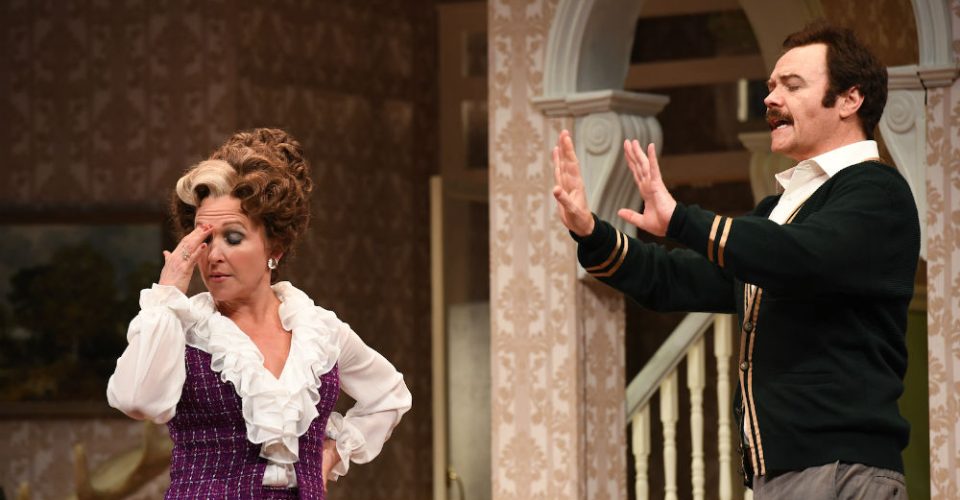 Following successful seasons in Sydney and Melbourne, the world premiere of John Cleese’s Fawlty Towers – Live is heading to Adelaide for a three week run at Her Majesty’s Theatre. With a cast handpicked by Cleese himself, Fawlty Towers – Live is based on three favourite episodes of the much loved comedy BBC TV series co-written by Cleese and Connie Booth: The Hotel Inspectors, Communications Problems – featuring the very hard-of-hearing Mrs Richards, and The Germans.

With a cast that includes Blazey Best as Sybil, Syd Brisbane as Manuel and Aimee Horne as Polly, we speak with Stephen Hall who is not only playing the role of Basil Fawlty, but is no stranger to performing John Cleese roles which include Sir Lancelot, The French Taunter and Tim The Enchanter in the 2007 Australian premier season of Monty Python’s Spamalot. Together we ponder, with all of his intensity and somewhat self-induced stress, how has Basil Fawlty never exploded his own brain?

“Basil is not very good at stress management, Stephen says. “He’s very good at stress creation and he keeps on digging holes for himself that any reasonable person would never do, yet he keeps on shovelling the dirt in on top of himself. And in this play, during the course of proceedings, suffers a bit of head trauma. He’s a bit like a cartoon character; he’s larger than life and, although he keeps bouncing back, he gets himself into more trouble the next day.”

Sybil Fawlty, in complete contrast, is so calm and in control of it all. It’s a wonder how miss-matched couples like she and Basil actually get together in the first place. How did she not think he was too much hard work for her cool and calm demeanour, and how did he not run from her apparent calmness from the start?

“It’s a mystery, isn’t it?” he laughs. “Blazey and I have discussed this, mainly because it’s fun to speculate. Our theory is that they met when they were quite young, at a time when Basil was happy and quite a snappy dresser. He’s quite a witty man; he enjoys language and uses it playfully. Nowadays he only does it for himself, mostly in sarcasm and at Sybil’s expense.

“I think once upon a time he would have been a quite amusing young man. Our theory is that Sybil thought that Basil was more socially up the ladder than what he is, so she might have thought she was marrying up – but it’s turned out to not be so much the case. We think there was an attraction there once upon a time, and maybe she used to laugh at his jokes a lot in the early days. Working and living together, we suspect neither of them bargained for the life they got. Neither of them saw ‘this’ as their happily ever after.”

Maybe all those things they thought cute in the beginning began to grate them after a while. Or perhaps the hotel was their ultimate downfall?

“There’s really no real escape for them,” Stephen says. “This is their business and it lives or dies on the work that they do. I think they’ve thrown everything into it. But they can’t escape it or each other because they live on the premises. I suspect that Basil thinks the hotel would run just fine if it wasn’t inconvenienced with all these troublesome guests [laughs]. He just sees them all as a nuisance.

“The other theory is that Sybil grew up in a hotel that her parents ran, so she’s always been in and around the hospitality industry and has always been very good at it,” he adds. “Sybil is a people person, very gracious and charming with the guests and keeps everything on an even keel, so that’s what we think her background might be. Maybe, after helping her parents out, she talked Basil into opening a hotel – which, of course, has been the worst possible fit for him!”

The set is very closely modelled on the TV show, with four main areas been seen at once: the dining room, office/reception area, entrance hall, Mrs Richard’s upstairs room.

Things happen simultaneously with action continuing from one place to the next, which serves to inform the whole story,” he says. “It’s like an omnipotent view of the goings on that you just don’t get in the TV show. It’s all very cleverly structured.”

How does it feel to be hand-picked by someone like John Cleese who is essentially British comedy royalty?

“It’s a bit of a cliché but it’s a dream come true,” Stephen enthuses. “I’ve been a fan of his forever and I came to know Fawlty Towers by way of Monty Python’s Flying Circus which I fell in love with at a very young age. When I found out they were doing tryouts for a stage show that was adapted by him, I had to go audition. I initially thought I had a good chance, but once I got to the finals and there were four or five other Basils there that looked so much more like him than what I did. But, in one of the subsequent interviews, John said that one of the things that he liked about me was that I was not a carbon copy of him, and that I was being Basil rather than someone impersonating John Cleese playing Basil.

“I think we have all been really well cast. We are all the same but different from the original characters. The fans seem to be really happy with what we are doing with their beloved characters; we’re alike enough and different enough to be refreshing. Manuel is such a crowd favourite. He’s the underdog and well-intentioned, but he keeps getting injured by Basil who can’t contain his frustration. The character of Manuel is so loved that he often gets a round of applause in his first entrance. Amy is brilliant as Polly. She’s a dead ringer both in mannerisms and vocally. She’s hugely talented and absolutely fantastic.

“Caroline J. Ranger is such an amazing director,” he adds. “The choreography of people coming and going is so smooth. She drilled us over five weeks, always with the imperative with keeping it fast and light and moving along, otherwise the air goes out of it. We try to not let those who know the show to not get ahead of us.”

Conversation turns to the Faulty Towers The Dining Experience – a dinner and show based on Fawlty Towers. It seems that the creators never sought permission to use Cleese’s characters and concept.

“John was furious,” Stephen says. “He knew of the show’s existence, but it was when he toured here in March [with Eric Idle] that an Australian journalist alerted him to the success of it. The show has been going for about 20 years and pulls in over a million dollars a year. They used his intellectual property without his permission. When John found out he was really upset because they continue to make money from it but have never approached him for permission. He’s still considering legal action.

“There is also the added potential to confuse that show with this one, which is sometimes concerning.”

How have audiences responded to Fawlty Towers – Live so far?

“Really well, actually,” he replies. “It’s working it spell on people. And you don’t need to know the TV series to enjoy it either. I recently had a friend come along to the show who has never seen an episode, and he absolutely loved it. It goes to show that it stands on its own as a really funny piece of theatre.”