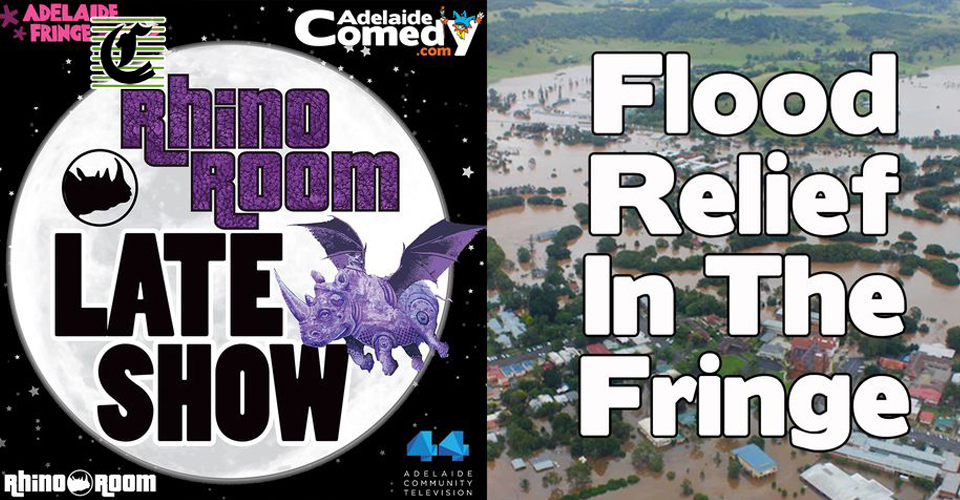 The people who run Adelaide’s spiritual home of comedy all year ‘round – Rhino Room – are understandably pretty busy at the present with Adelaide Fringe being completely insane for them; running six rooms in two venues with four or five shows in each room for four weeks, late nights, long hours and lots of life. Laugh Commander, Craig Egan, decided to take on a bit more work, but for the best possible reason.

Like all of us, Craig has been shocked by the scenes of devastation from the flood affected areas of Queensland and New South Wales, and decided to turn the feeling of helplessness into a positive helping action. On Tue 8 Mar from 9:45pm, Rhino Room will be hosting a special fundraiser gig featuring a terrific line-up of comedians from around the Fringe. All proceeds (including ticket fees – courtesy of Adelaide Fringe) will go to two really worthy causes. The first is Lismore comedian Vanessa Larry Mitchell, who has been doing her Teardrops On My Dildo show at The Howling Owl in Adelaide, while her home has been in Lismore has been decimated.

“I’ve lost everything. Like… Everything!” Vanessa says. “But one of the things that broke my heart a little is my speakers, mics and sound gear that I use to run events all went under. I had an open mic ready to go last night for a bunch of brand new cherry popping comics to get up and have a crack. I also run all female nights and LGBTQI events…. So this sound gear is kind of a Lismore community thing.”

The plan is to try and raise enough money to help replace that equipment and the rest will go to the Lismore City Council to assist them in the aftermath of the floods. There are many worthy causes out there and Fringe time can often be hard on people’s wallets, but this is a great night for a good cause. You also don’t have to worry about parking and everything because there is an option to buy a watch it live from home ticket!

The full line up has been announced: