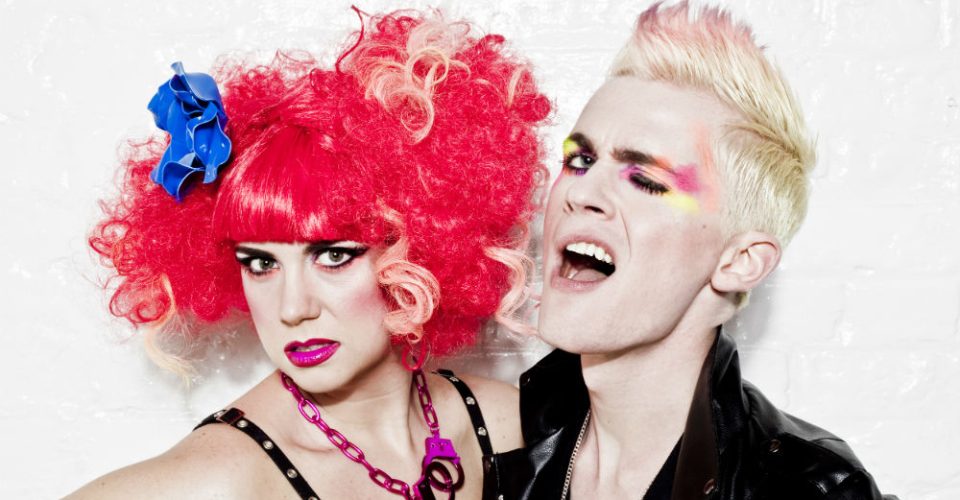 Laura Corcoran and Matthew Jones have been building loyal fans across the globe with their musical comedy act Frisky & Mannish since 2008. They UK musical duo have described themselves as ‘popmusicy-seriocomic-mashparodic-vaudevilliansketchcabaret-bapsbotty-infotainment’ and will certainly be bringing loads of exuberance to the 2015 Adelaide Cabaret Festival.

The Clothesline speaks via email with Frisky and Mannish and begins by asking them what Adelaide Cabaret Festival audiences can expect from the comedy duo this time.

“We are, of course, bringing our unique brand of twisted pop cabaret. If you haven’t seen us before, this is an opportunity to see the music you love affectionately clawed to pieces. If you have seen us in Adelaide before, either at the Cabaret Festival or the Fringe, this is almost all never-before-seen material, including some brand new, specially written bits, just for you!”

Frisky & Mannish claim that restraining orders, together with loads of hard work have ensured the two have remained successful together for so long, although they joke that they get a lot more help from others you would expect.

“We’re like ‘Jenny from the block’, we just keep it humble, keep it basic, and just have the Tour Manager, Personal Manager, lawyer, chef, masseuse (one each, for hygiene), make-up artists, hairdressers, stylists, body doubles, understudies, vocal coaches and very small team of groupies.”

What are each other’s worst habits when on tour?

“We both just use touring as an excuse to ‘sample the local cuisine’ – in Mannish’s case this means frequent trips to the STI clinic, for Frisky it just means getting fat.”

What songs can we expect you to be singing each night?

“ALL OF THEM! But seriously, we do cover a rather worrying range of music. This particular outing we can confirm Sia, Bon Jovi, Madonna, Miley, Geri Halliwell and Savage Garden, but that’s by no means comprehensive.”

The British duo have performed at the Edinburgh Festival Fringe, Sydney Opera House, Melbourne Comedy Festival, Adelaide Fringe, London’s West End and New York, Berlin and Singapore with their shows School Of Pop, The College Years, Pop Centre Plus and Extra Curricular Activities. What has been your favourite place in the world to perform?

“Every place we’ve performed is loaded with memories, it’s difficult to compare them. Our first big show outside the UK was the Sydney Opera House, so that will always be special; but our first ever shows outside the UK were New York, in seedy burlesque dives, with experiences we won’t admit to in print. Home-town shows are always such a highlight though, especially when we’ve played huge, historic venues, like the Shepherd’s Bush Empire.

“All that said, Adelaide Cabaret Festival is, genuinely, our favourite festival in the world – it brings together such amazing artists and provides them with a piano until the wee hours of the morning. Dangerous.”

Who has been your memorable audience member?

“A woman who quietly stood by the side of the stage until we finally looked her way. She then requested to sing Mustang Sally, as if we were hogging a karaoke night and she was entitled to have a go. We let her do a verse and chorus, but she was so off her face we had to forcibly take the microphone back. Her friends then ushered her out of the building, loudly proclaiming they were taking the real star home.”

Once people have purchased tickets to your show, what else should they go see?

“Everything! As we said, this is our favourite festival because of the amazing artists it brings into town. Everyone represents a different corner of cabaret from around the world. Just book for anything that takes your fancy – be adventurous and open-hearted and we will all reward you with song and love (possibly physical).

‘Personally, we have known and loved Lady Rizo, Hannah Gadsby, Meow Meow, Adam Hills, Ali McGregor, Trevor Ashley and Storm Large – if we were you, we’d be going to see them for sure.”

What is next for Frisky & Mannish after the Adelaide Cabaret Festival?

“We’re straight back to London for more shows, including a new adventure in song writing (which we hope to bring back to you soon), and then a UK tour. A spa weekend or two would also be nice.”