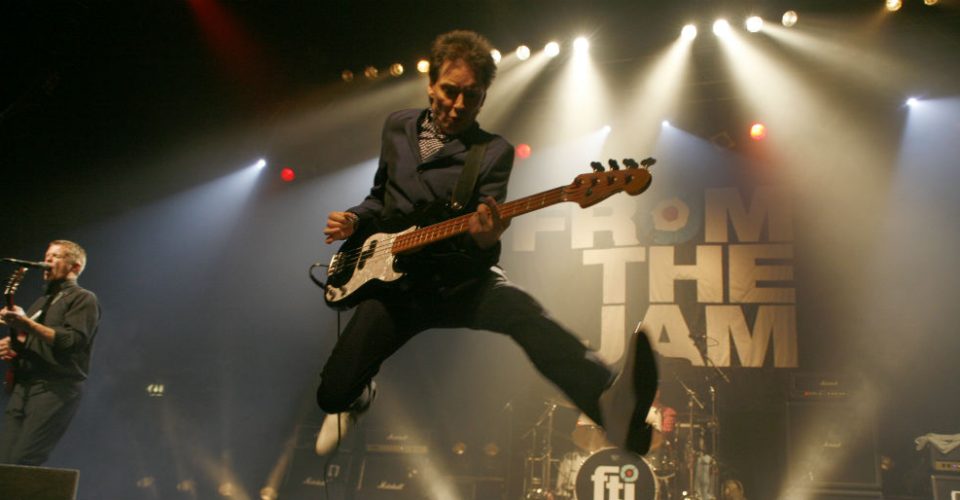 The Jam were one of the most exciting, influential and memorable English bands to emerge from the punk revolution of the late 1970s. Combining punk sensibilities with the self-awareness and self-respect of the mod movement, they produced some of the greatest albums of the era. The band’s legacy is being perpetuated in the form of From The Jam, a band that features the impressive talents of one of the three original members of The Jam, bass player Bruce Foxton. We catch up with him on the eve of a Thursday night Brisbane gig, and ask him about the tour, the band, and the music.

It’s great that you are coming back to Adelaide. I saw you in 2008 and it was a brilliant night. Back then it was pretty much all the hits. What can fans expect from the show this time around – are there any significant differences to the 2008 show?

“Well, Rick’s (Rick Buckler, The Jam’s original drummer) not here, in 2008 he was still playing with us,” Bruce begins. “We’ve got a great drummer called Mike Randon on the kit now, and he’s playing really well.

“In terms of the set, obviously From The Jam are going to play a majority of The Jam’s songs and, as this tour is called ‘Going Underground’, naturally that one will be in the set. There will be quite a few of the hits, as well as some album tracks.

“Plus, we’re putting a couple of new songs from Russell’s and my Smash The Clock album which came out around May in the UK,” he continues. “We’ve been doing that in the last few shows over here and, although not many people have bought the album over here (it was only like a cottage industry release the UK), it did chart which we were well pleased about. Bearing in mind that not many people know Smash The Clock, the songs are going down really well. We do a song called Pictures And Diamonds, and another one called Now The Time Has Come which actually got some great radio play in the UK. Radio 2 is actually our age bracket now, over there, and we got on the playlist which was amazing. For a person of my age, to get back in the charts after all these years, was excellent.

“The songs are going down well here. The bulk of the set is Jam songs, as I’ve said, with a sprinkling of new material.”

I often see From The Jam gig adverts in the British music press, and also when I am over in England I see your posters all over the place. The band seems to be keeping busy. Obviously the songs have a resonance for many people, they are also great songs, and it appears to be a popular gig. What’s the main reason you keep going with From The Jam?

“Because I really enjoy it, first and foremost,” Bruce replies. “I just love playing these songs, it’s as simple as that. We vary the set quite often, it keeps it fresh for us and, like you said, the majority of the audience are of my age, Russell’s age et cetera.

“But, particularly in the UK and perhaps over here, we are appealing to a younger audience and I think that is a testament to the songs. The writing of them, the playing of them, the melodies are very memorable. They still sound contemporary today. Next year is the 35th anniversary of The Gift album and it’s like, they’ve stood the test of time.

“It’s a great gig to have. Here I am in Australia, playing these songs, having a great time. As far as I’m concerned it doesn’t get much better than that.”

“Yeah, we didn’t get to play Adelaide last time (in 2015) did we? I don’t know why that was really; it was a real shame. Better late than never; we’re coming back and will hopefully rectify that, and everybody will have a good night!”

You played with Paul Weller, after a lengthy absence, on his Wake Up The Nation album, and he appeared on Smash The Clock, your most recent record. Has he spoken much about how he feels, regarding From The Jam, or is it just one of those things that isn’t mentioned?

“I think it’s pretty much the latter,” Bruce says. “He knows what I do; I think we do the songs proud, the songs are played with as much passion and energy as they were all those years ago. We take it very seriously; we treat the songs with respect. I think Paul probably realises that but we don’t really chat about it. He’s obviously aware of how I earn my living. You do your own thing and he’d probably say ‘I don’t give a monkey’s...’

It was a thrill when he played on the album; we recorded at Paul’s studio in Ripley in Surrey. He pops down quite often because it’s his studio and his offices are there. He popped in and said ‘Right, I’m all yours’ and he played on a couple of tracks. The one we play live at the moment, Pictures And Diamonds, and there’s another track called Louder, that he put some lovely keys on for us. We hung out, we had a cup of tea together and, you know, we get on great. I don’t see him every day of the week but when we do see each other, we love each other and it’s all cool.”

I wasn’t sure what to expect, the first time I saw From The Jam, but I left the 2008 gig convinced that you guys were doing the right thing.

“Thank you. We have eventually overcome that but early on there was an element of, you know, ‘what’s it gonna be like?’ But it’s not The Jam, that’s why we go out as From The Jam. Russell does a great job out front, and puts his own mark on it. I think, all those doubters, we’ve won them over.”

What’s the connection between Bruce Foxton the solo artist, the Smash The Clock album and From The Jam?

“Russell co-wrote it; the actual songwriting is 50/50,” Bruce explains. “It’s not me being big-headed or conceited, but people haven’t really heard of Russell. Whereas I’ve got a kind of reputation and name out there, so it was the best shot at making people aware that the album was out.

“The next album we’re gonna do will be have ‘Foxton and Hastings’ on the album sleeve though. Russ deserves the recognition. We just thought it was better to go with my name on it this time around.”

How do you view The Jam and From The Jam? Is there a blurring of the lines these days or do you see them as two distinct entities?

“Well, that’s a good question,” he says. “The connection running through it is myself, so the two are kind of tied together. With a slightly different take since Russell’s been involved. Certain songs we extend and take them elsewhere, so it’s probably a good extension of The Jam, basically.”

Do you have a favourite Jam song and/or album?

“I get asked these questions a lot. For me, All Mod Cons was a pivotal album because, in those days, the third album was make or break. The first one was a hit or success, which it was for us. This Is The Modern World (second album) got overlooked by the press; maybe having acoustic guitars on an album was too much of a drastic change, although I thought the album was really good. We knew that the pressure was on; that we had to come up with something really good, to keep our record deal, and we achieved that with All Mod Cons.

“Track-wise it’s difficult. I would say Down In The Tube Station At Midnight now, but it changes by the minute… There’s a lot of songs that mean a lot to me.”

For what it’s worth, All Mod Cons is my favourite and has been, probably, since it came out. I think it is a wonderful album.

How has this tour been for you?

“Tiring; it’s the jet lag that’s the killer,” Bruce says. “We knew it was bad because we’ve been a couple of times before but we’re still kind of suffering from it. I think we’re feeling a bit more back to normal now but touring is tiring in the UK; just getting in the car and driving to the gig, doing a high-energy show, going to bed, and then on the road again the next day. I’m not complaining but if you do all of that, with jet lag, it’s a killer [laughs]. Waking up at stupid-o’clock in the morning, it’s hard.

“The tour itself, it’s been great. Sydney was a top show, Melbourne was really good, and we’ve done a couple of smaller gigs too. Tickets tonight in Brisbane have done really well, Adelaide’s gone great, and Perth has sold out. So, hopefully, we’ve got three great shows to bring it to a close.”

Do you have any special message for your Adelaide audience?

“We’re really looking forward to seeing everyone, and let’s have a good time!“

From The Jam performs at Governor Hindmarsh Hotel from 7.30pm on Fri 16 Sep with special guests The Strums.

Book at The Gov and oztix.com.au. Click HERE to purchase your tickets.

Tags:  All Mod Cons Bruce Foxton David Robinson Down in the Tube Station at Midnight From The Jam Going Underground Governor Hindmarsh Hotel Louder Mike Randon Now the Time Has Come Paul Weller Pictures and Diamonds Rick Buckler Russell Hastings Smash The Clock The Clothesline The Gift The Gov The Jam The Strums This Is the Modern World Wake Up The Nation