Fry’s third autobiographical work after Moab Is My Washpot and The Fry Chronicles suffers from all the same irksome problems: wild overuse of adjectives; oodles of name-dropping; endless self-putdowns designed to make you like him more; and continual assurances that he’s not some posh tosser from a private school. And yes, he doth protest too much. 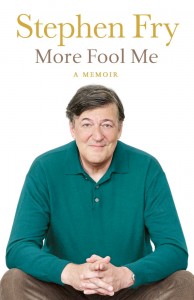 Opening with a few too many pages devoted to what we already learned in The Fry Chronicles (while also oh-so-humorously noting that that’s a splendid book), this eventually gets down to the juicy stuff (or at least the juicy stuff according to Stephen Fry) when he reveals that in the social whirl of being famous in the late ‘80s and early ‘90s he moved from being addicted to sweets and chocolate to being a plain old coke fiend. And chances are that many readers would have read star bios before, and know all about how reminisces of substance abuse go, and will find Fry’s prattlings about how he had a toot wherever and whenever he could over many years all a bit tiresome. There’s also the expected strain of self-congratulation (he thinks he was pretty good in a straight-ish role in pal Kenneth Branagh’s Peter’s Friends if he doesn’t say so himself), much about Hugh Laurie and how Hugh Laurie is so much better-looking and talented than he is and all of that, and precious little of the serious material that distinguished Moab (it was now cool and okay to be gay, so let’s not worry about that anymore). And then there’s the name-dropping, and only Stephen Fry could casually drop into conversation how he is or was pals with Rowan Atkinson, John Cleese, Peter Cook and so forth (we know, we know!!!) but also had sometimes-drug-fuelled evenings out with Francis Bacon, Damian Hirst, members of Blur and Oasis – and on, and on, and on.

Perhaps most cheekily, however, is the fact that the last third of this heavy volume is devoted to entries from Fry’s diaries from 1992/3, with a few footnotes about how various famous people became close personal friends (naturally) and an early suggestion that he’s building to a mid-‘90s breakdown – a big, poncy mid-‘90s breakdown. Which will surely be detailed in his next autobiographical volume, which will be called… what? A Portrait Of The Artist As A Young Prat?