GENIUS AND HEROIN – Is Self-Destruction the Price of Brilliance? – Book Review 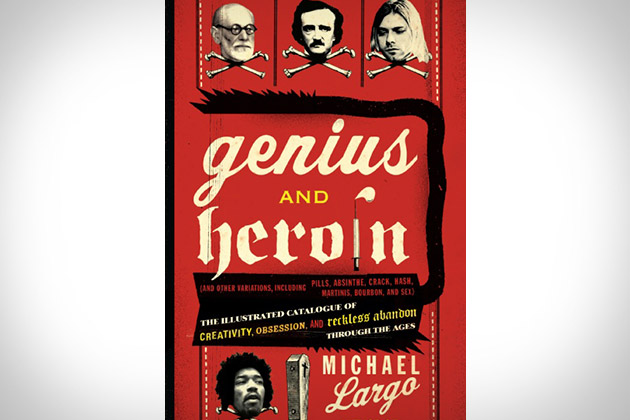 Flicking through the alphabetised list of creative types who succumbed to their addictions- not just to heroin, but everything from obsessive work habits to booze, pills and sex – it is easy to think of this as a collection of significant moments in human history. There is the story of Pierre Lallement who invented the first bicycle and spent the rest of his life obsessively trying to improve his design. D.H. Lawrence and his compulsion to create, which led him to an amazingly prolific output, John Lennon and his various drug addictions which fuelled his music making and Jack London whose chronic alcoholism put an end to his brilliant creativity. Ivan the Terrible, Kurt Cobain, Heath Ledger, Lewis Carrol, Louis Braille, Charles Bukowski, Lord Byron, Dante, Miles Davis, Ray Charles, John Keats, Franz Kafka, Emily Dickinson, James Dean, Sylvia Plath, Elvis Presley, Edith Piaf, Edgar Allan Poe, Sigmund Freud, Jean Harlow…hundreds and hundreds of the cultural and intellectual icons of human history.

It’s possible to be left wondering if anyone ever did anything of any worth while sober. Largo asks whether it is only through madness and obsession that brilliance emerges. Why are creative geniuses so often self-destructive? Is self-destruction the price of brilliance? So many of these brilliant souls died very young, with work left undone.

Genius and Heroin is a remarkable and fascinating read. After extensive and meticulous research, which must have in itself been fuelled by some degree of obsession, Largo claims that for around 80% of the 500 geniuses examined, addiction was ultimately detrimental to their creative output.

After reading Genius and Heroin (yes, I read it obsessively!), I felt profoundly grateful to those people for what they have given the world, whether it was despite their pain or because of it.

Lynette spent much of her childhood roaming around Australia in a caravan. Now, she is constantly torn between competing desires for travel and suburban security. Her short stories and flash fiction have been published and awarded and she is working towards her PhD in Creative Writing at the University of Adelaide, where she also teaches. Lynette is currently editing the short story collection Breaking Beauty, which will be published in November 2014. Twitter: LynneTashi Blog: lynettewashington.wordpress.com Facebook: Lynette Washington – Author
Copyright 2018 The Clothesline {site Massive Empire}
Back to top