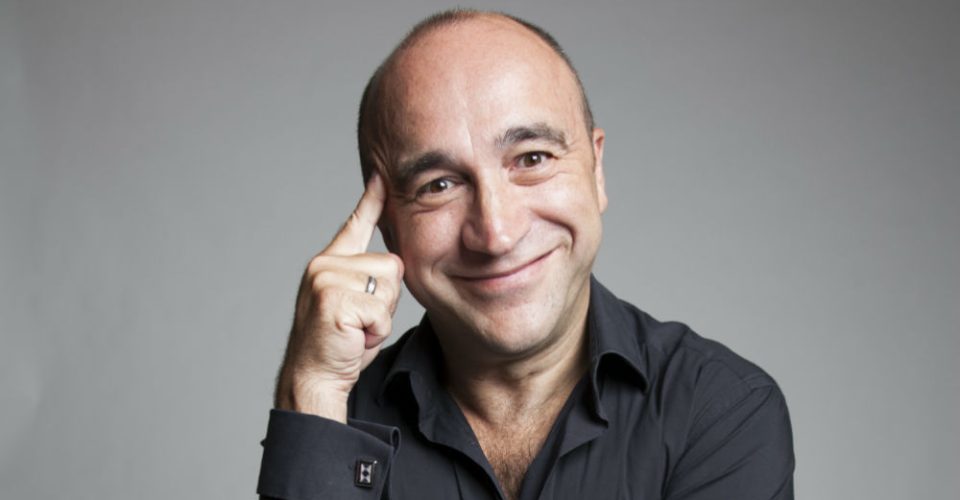 The star of Acropolis Now, Wogs Out Of Work, Flying Doctors and Underbelly became part of South Australian TV culture with the RAA television ads. The ads, which ran for an incredible 11 seasons were, according to George Kapiniaris “really ground-breaking and very South Australia-centric. My character was an icon around Adelaide.”

End Of Dark Days Trev! is a nod to his RAA co-star Trevand will hark on the ‘dark days all around us and on the things people have to deal with in 2015. This one-man show is really a way to say thank you and see you later to Adelaide.

According to Kapianaris, End Of Dark Days Trev is a bit of a ‘where to next’ and finding his new identity. Will he be a real estate agent, a superhero …? In addition to raising a few laughs, Kapiniaris says that part of the proceeds from his Wed Feb 18 show will go to South Australian Firefighting Funds in the wake of the recent bushfires.

“My character in the insurance ads was so unlucky,” he says. “If I were still doing the ads, I’d probably get the blame for the State being on fire too!”

“I can’t remember how my first comedy gig went because it was over 30 yrs ago at a venue in Melbourne called Le Joke (a bit like Adelaide’s Rhino Room). It was an ensemble show called The IVF Show and I was performing alongside some great future comedians including Simon Palomares & Peter Rosethorn.I’m sure we did really well because thirty years later I’m still doing what I do for a living!”

“I studied Drama and Media at Rusden/Deakin and Simon Palomares, who I was studying with, suggested we do some stand up for a bit of fun and extra cash… Two weeks later we were doing a 90-minute show at the Comedy Café in Melbourne as The Tiboldi Bros and getting paid for it too!

“At the moment it’s Louis C K… I love his stand up and I love his Louis series…When I grow up I’d like to be just like him even though I’m probably older than he is.”

“Besides Louis C K, growing up, Robin Williams was my role model. I loved the comedy side, the philanthropic side, the serious acting side and the improv side of Robin’s character. What a shame we had to loose such a great performer.”

“Russell Crowe, but it’s an old number and he doesn’t like me much anymore. I told him he was a better straight actor than a comic actor. He wasn’t very happy with that comment.

“Can’t remember the best one…There’s too many of them. I did one at the Comics Lounge in Melbourne last year where I thought ‘Wow! That was the perfect set!’….Worst one was in Tassie. There’s not a lot of RAA members in Tassie.”

“Acting, comedy, performing are the only jobs I’ve had over the last 30 years. I haven’t done any other job. Some say I’m blessed, but I say I’m cursed!”

“Ginger McGowan….I have ginger pubes too!”

“I am shit hot on the electric guitar!”

“I have a history of Crohn’s Disease. I nearly died when I was 19; I had half my guts taken out so instead of a Colon, I’ve got a semi-colon!”

Hugs from my Dad coming home from school. First football game Tigers v Lions at the MCG in 1972. Holidays with my parents at St Leonards. Travelling on a train as a 6-year-old in Greece, on the way from Thessaloniki to Kalamata entertaining a bunch of passengers in Greek…Wait, I think that was my first stand up gig!”

“Anthony Keidis from The Red Hot Chilli Peppers. I was wearing a Michael Jackson T-shirt… very uncool at the time.”

“German Shepherds! I got bitten by one. It took a pet Shih Tu named Shang Hito bring me back to loving dogs again.”

“Bec Hill! She has always been my Adelaide Fringe crush! I get so embarrassed whenever I bump into her.”

“The ‘60s but as an adult. I love The Beatles, The Brady Bunch and The Wonder Years.”

“The best was from Maurie Fields who told me to never relax or become lazy. Once a performer takes anything for granted, that’s when he starts failing in this industry.”

“I should’ve had sex with Barbara Waters from Crown Of Thorns.”

“Yes they have, many times. Audience members have also told me they get stomach cramps from laughing so much.”

“Is that a ladder in your stocking or a Stairway To Heaven?”

“Honeycomb Crunch, even though I haven’t really used a comb for a long time! But I am a Honey!!”

“Who can you trust?”